5. Wang?: Ryan Zimmerman's two-out single off Cubs' starter Matt Garza in the first extends the Nats' 26-year-old third baseman's hit streak to seventeen games, but he's stranded at first on a hard-hit lineout to Marlon Byrd in center by Michael Morse and Chien-Ming Wang takes the mound in Wrigley Field in Chicago for the first time in his Major League career. The 31-year-old (trying-to-find-his)-sinker baller gets two groundouts to short and two outs with five pitches before a six pitch at bat against Blake DeWitt stretches the Nationals' starter to 11 pitches total before he's done with a 1-2-3 scoreless first. Garza's fastball's jumping late and he's got 5 K's after striking out the side around a one-out double off the Under Armour sign in left-center by Jonny Gomes. Wang's back on the mound for the second, and he's got one out before he puts the first Cub on when he hits Marlon Byrd with a fastball in the elbow. Wang erases that runner, however, with a grounder to short and 6-4-3 inning-ending DP for two scoreless in Chicago...

4. Chien-Ming Wang?: The Taiwanese-born former Yankees' right-hander issues a one-out walk to Geovany Soto in the third. The Cubs' Matt Garza gets down his first successful sac bunt of the season/wastes an out, and Starlin Castro's groundout to short is out no. 3, Wang's 6th ground ball out. Wang's through three scoreless on 42 pitches. After Matt Garza collects K's six and seven on the way to his fourth scoreless frame, the Nats' starter gives up his second walk of the night before retiring the Cubs in the fourth on just 12 pitches. 54 total through four. Wang's quickly back out on the hill after Garza collects his 8th K and issues his second walk but completes his 5th scoreless frame. Wang gets two more groundouts, no.'s 9 and 10 and no. 10 is all about Desi's range as he gets to a sharp one behind second, and makes a strong throw to first. Wang gets his first K of the season on a called strike three on Geovany Soto that ends his fifth scoreless frame in Wrigley Field.

3. MORSE CRUSH!!: One down in the sixth. Michael Morse gets hold of a 3-1 slider from Matt Garza and drives it out to straight-center and GONE!! Morse's 20th HR of 2011 sails over the Wrigley Field batter's eye (it's 400ft to the wall). 1-0 Nats. 466 ft HR. Jayson Werth rips a one-out single by third off Blake DeWitt's glove, and Jonny Gomes sends his 13th HR of 2011 out to left and into the stands. Throw it back, Cubs fans, it still counts. 3-0 Nats. Chien-Ming Wang's back out on the mound in the 6th. Pinch hitter Tony Campana squares to bunt, but can't get it down, but the speedy Cub beats out a grounder to first that bounces off Michael Morse's glove and onto the right field grass where Danny Espinosa valiantly tries to make a play tossing to Wang covering a step too late. First Cubs' hit off Wang. The Nationals' right-hander completes his sixth scoreless, however, and collects his 11th groundout. 3-0 Nats after six.

2. JAUNT!!: Sean Burnett tilts his cap slightly to the right, gives up a hard-hit two-out single but completes a scoreless seventh to stretch the Nats' shutout to seven strong. 3-0 Washington. Tyler Clippard gets the first two outs of the eighth, but a 1-0 fastball to the hitless-so-far-tonight Starlin Castro gets sent out to center for a solo HR that makes it 3-1 Nationals after eight innings in Wrigley Field. 9-game hit streak for Castro. Two-run lead for Washington after eight. STOREN WARNING!! Drew Storen gets a pop to short by Blake DeWitt. ONE! A one-out walk to Carlos Pena bring the tying run up. Storen gets Marlon Byrd swinging. Alfonso soriANO? Fly to center. Ballgame. 3-1 final. 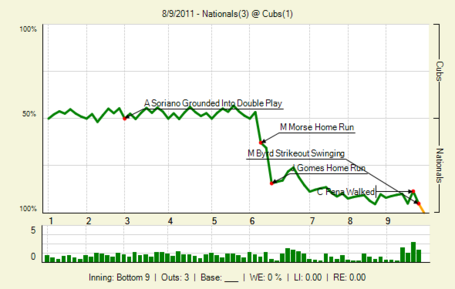