5. BANG...And BANG: The HR Braves' backstop Brian McCann hit to right field off Chien-Ming Wang in the bottom of the first would've been worse if Wang and Nats' backstop Wilson Ramos hadn't combined to erase a leadoff walk to Michael Bourn with a force at second on a groundout and a caught stealing on the runner, Jose Constanza, who replaced Bourn at first. With two down, McCann got hold of an 0-1 splitter outside and sent it out to right and over the Turner Field fence for a solo blast and a 1-0 Atlanta lead. After Nats' backstop Wilson Ramos erased a leadoff walk to Laynce Nix and a one-out single by Chris Marrero in the second with a double play grounder that gets Tim Hudson through two scoreless, Braves' third baseman Chipper Jones gives the Braves a 2-0 lead with HR no. 451 which he sends out to left on a 1-0 sinker outside that Wang leaves up enough for the veteran slugger to push it out for an opposite field blast and Jones' second HR in the last two games...

4. HUDSON!! [Shakes Fist!]: A one-out walk to Dan Uggla in the fourth costs Chien-Ming Wang his third earned run allowed when the Braves' infielder takes second on a Chipper Jones' groundout and scores on a two-out line drive single to right by Eric Hinske. 3-0 Atlanta. Tim Hudson gave up a one-out double to Ian Desmond in the third, but stranded him at third a wild pitch a walk to Jayson Werth later when Ryan Zimmerman hit into an inning-ending double play. Chipper Jones started the 5-4-3 rally killer that ended the third. After Wang's walk to Uggla eventually gave Atlanta the three-run lead after four, the Braves' starter pitched around a one-out double by Wilson Ramos in the fifth for 5.0 scoreless on 73 pitches in spite of surrendering four hits and two walks.

3. Hudson's Misses, Werth Crushes: A mistake by Hudson on an 0-2 pitch to Jayson Werth finally gets the Washington Nationals on the board in the 5th. The Nats' right fielder smokes a 91 mph sinker from Braves' right-hander for Werth's 17th HR of 2011, but Hudson retires the next three Nats in order and Atlanta gets the run back in the bottom of the frame. Dan Uggla hits a leadoff double to left on an 0-1 sinker from Wang, and a one-out groundout moves the Braves' second baseman to third. ATL SS Alex Gonzalez drives Uggla in after he battles in a seven-pitch at bat and sends a two-out RBI single to left on a 93 mph 2-2 sinker from Wang. 4-1 Braves. Wang's done for the night.

2. Bases Loaded K's Kill Rallies: Braves' lefty Eric O'Flaherty throws a scoreless seventh and Nats' relievers Sean Burnett and Todd Coffey pitch a scoreless bottom of the inning, Jonny Gomes starts the Nats' eighth with a leadoff single to second, beating the throw to the bag in spite of an impressive stretch by Braves' first baseman Freddie Freeman. Gomes takes second on a groundout and steals third with Jayson Werth up against Atlanta lefty Jonny Venters. Werth walks and Ryan Zimmerman gets a free pass too, so the Nats have the bases loaded with one down and Michael Morse up against the Braves' left-handed set-up man. Morse swings through a 3-0 pitch and sends his bat flying, then hits what should be a double play grounder to third that Chipper Jones...drops. E: 5. Run scores and the bases are still loaded, 4-2 Braves. Jesus Flores K's on three pitches from Venters, and Danny Espinosa does two. Six pitches, two K's, and the Nats leave the bases loaded. 4-2 Braves after eight.

1. Off Clipp?: Jason Heyward triples to right off Tyler Clippard in the bottom of the frame, crushing a 2-0 fastball and beating a strong relay throw in from Jonny Gomes to Danny Espinosa and on to Zimmerman at third a step or two late. Alex Gonzalez makes solid contact on a two-strike fastball and sends it deep enough to center to score Heyward and give Atlanta its three-run lead back. 5-2 Braves. Craig Kimbrel gets Chris Marrero looking with an 0-2 fastball knee-high outside. Wilson Ramos singles to keep hope alive for Washington, going back up the middle on a 96 mph 2-1 fastball. Jonny Gomes K's swinging through a 2-2 slider. Ian Desmond K's swinging. Kimbrel strikes out the side, Washington drops two straight to lose series to Atlanta and end their six-game road trip 1-5. 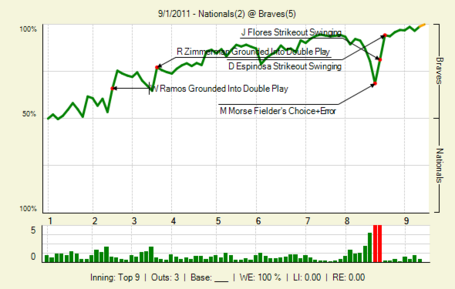