5. Nats + LHP = Trouble: After missing with a 74 mph 2-2 curve, Nationals' left-hander John Lannan went to his slider, dropping an 82 mph bender across the zone to get Astros' leadoff man Jordan Schafer chasing, ending an eight-pitch at bat. Nine pitches and two groundouts later, Lannan's through a 17-pitch, 1-2-3 top of the first. Houston left-hander Wandy Rodriguez, retires the Nationals in order in the bottom of the frame. Washington, as a team, enters the game with an NL-worst .225 AVG against LHP, with the 4th worst OBP (.310) and the worst SLG, tied with Atlanta, at .348. The Nationals also have the third-lowest BABIP vs LHP in the National League, so they aren't getting lucky against lefties either. The Astros' starter needs just eleven pitches to retire the Nats in order in the bottom of the first. John Lannan gives up a leadoff double by El Caballo, Carlos Lee, but three outs later the Houston first baseman's standing at third when the Washington lefty completes a 13-pitch second against the first-pitch swinging 'Stros...

4. Long Inning, Short Outing: In the top of the third, Michael Morse misplays a one-out double to left by Houston outfielder Jordan Schafer into a triple with an E that gives the Astro an extra base, so the single by Jason Bourgeois that follows drives Schafer in and gives Houston a 1-0 lead. The next four batters all reach on clean singles, two of them RBI hits off Lannan, 3-0, and Astros' second baseman Jose Altuve's swinging bunt back to the mound is thrown away by the pitcher for the second E of the inning. Two runs score, 5-0. Astros' catcher Carlos Corporan collects the seventh hit of the inning off Lannan and drives in the sixth run with a suicide squeeze bunt that gets by Lannan, who's completely disoriented out there and done for the night 25 pitches and just one out into the third. 55 pitches total on the night, 36 strikes, eight hits, six runs, four earned and one walk allowed.

3. Marrero Is Teh Clutch: Ryan Zimmerman and Michael Morse hit back-to-back singles to start the Nationals' fourth, and a wild pitch by Wandy Rodriguez put runners on second and third, but back-to-back K's by Jonny Gomes and Danny Espinosa threatened to kill the potential Nats' rally. It's up Chris Marrero with two on and two out, and the Nationals' rookie comes through, lining to center on an ankle-low 77 mph 1-2 curve from Rodriguez and driving both runners in to get Washington on the board at 6-2 after four. Astros' shortstop Angel Sanchez singles with one down in the fifth. Yunesky Maya gets up 0-2 on infielder Jose Altuve, but the Nats' right-hander hangs a 69 mph bender up that's smacked to center for a single that sends Sanchez around to third. A Carlos Corcoran sac fly to center scores Sanchez, and Wandy Rodriguez crushes a first-pitch fastball, doubling to right to drive Altuve in and make it 8-2 Astros in the fifth.

2. MORSE CRUSH!!: Michael Morse started the game 1 for 3 with a HR in 5 plate appearances against Wandy Rodriguez in his career. After his single in the fourth and solo HR in the sixth, Morse is 3 for 6 against the Astros' left-hander and he's got his 27th HR of year. An opposite field blast by Morse on an 0-1 fastball low and inside is powered out to right and just over the out-of-town scoreboard. Wow? That's not fair to the opposing pitcher. 8-3 game after six innings in Nats Park. Collin Balester completes two scoreless with a 12-pitch, 1-2-3 top of the seventh. Jesus Flores singles to right to start the bottom half of the frame. Two outs later, Jayson Werth hits another single off Astros' reliever Aneury Rodriguez setting Ryan Zimmerman up with an RBI opportunity. Zim lines one just over sec---no, Jose Altuve hustles back to make a leaping catch, robbing Zim to end the seventh. Still 8-3 Astros.

1. At-A-Hual-Pa: Atahualpa Severino records two K's in a 22-pitch eighth inning in which he allows two singles but nothing else. Houston right-hander Juan Abreu strikes out the side in the Nats' half of the frame, hitting Jonny Gomes with two down but rebounding to strike Chris Marrero out and end the frame. The Astros add a run off Todd Coffey in the bottom of the frame when Carlos Corporan hits a two-out single to drive Houston's ninth run in, 9-3. Jesus Flores reaches on a throwing error in the ninth, but the Nationals can't rally. Astros win, 9-3 final. 3 hrs and 5 minutes later. 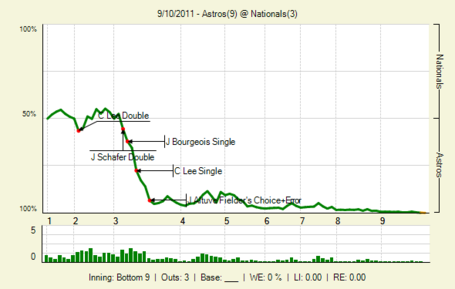