5. Bix And Lombo: With Ian Desmond (2 for 15 vs R.A. Dickey) and Danny Espinosa (0 for 11) sitting this one out, Brian Bixler gets a start at short and rookie infielder Stephen Lombardozzi is in a more familiar position at second in his second major league start on the right side of the infield. Neither Nat gets a hit off Dickey in front of Ryan Zimmerman in the first, and Zim's two-out single™ is the Nationals' only hit through two against the knuckle-balling Mets' starter. Washington's '06 1st Round pick, Ross Detwiler, throws a seven-pitch first, retiring New York's top three in order. Detwiler gives up a two-out walk and a two-out single in a 21-pitch bottom of the second which ends with Mike Nickeas flying out to right. R.A. Dickey retakes the hill in the third and retires the Nationals in order on 10 pitches, setting the 5th, 6th and 7th batters in a row down after Zimmerman's first-inning single...

4. Return Of The Det: Ross Detwiler throws a quick 8-pitch 1-2-3 third that leaves the left-hander at 36 pitches after 3.0 scoreless IP. R.A. Dickey needs just 15 pitches in his fourth scoreless frame, as he sets three more Nats down for 10-in-a-row after Zimmerman's first-inning single. Ross Detwiler's last turn in the rotation was rained out and he was skipped rather than pushed back, so it's been 10 days since his last start, which was against New York, when he gave up seven hits and six earned runs in just 3.0 IP in which the left-hander threw 48 pitches, 34 strikes. After that start, the 25-year-old left-hander told reporters it wasn't, "...arguably my worst outing. It's definitely my worst outing. Nothing worked, they hit everything I threw up there hard." Asked what specifically he had struggled to do, a clearly dejected left-hander said it was simple, "Bad location. Bad pitches. Just...everything." He's sharp through four tonight.

3. 10 for 24 vs Dickey: Jayson Werth breaks up a streak of ten-straight retired by Dickey with a leadoff double to left in the Nats' 5th, then the Nationals' outfielder ill-advisedly breaks for third on a grounder to short by Rick Ankiel. Jose Reyes fields and throws to third trying to cut down the lead runner, but David Wright's off the bag, in the basepath, and he drops the ball allowing Werth to get to third safely on a sure out. Ankiel's safe at first. Dickey gets Chris Marrero swinging through a diving 1-2 knuckler. Wilson Ramos comes through, however, singling up the middle to bring Werth home and put the Nats up 1-0 after four and a half. Nine pitches and three outs later it's 1-0 Nationals after 5.0 as Ross Detwiler throws a 1-2-3 5th to complete 5.0 scoreless on 59 pitches, 39 of them strikes.

2. Two-Run Lead!: Ryan Zimmerman shoots an 0-2 knuckler from Dickey through short for a one-out single in the sixth. One out later, Jayson Werth smokes an 86 mph 2-1 fastball through David Wright at third. Wright can only close his eyes and duck with his glove extended, hoping the ball finds leather. It doesn't. Werth's 11 for 25 against Dickey after the single to left, but Jason Bay cuts it off to hold Zimmerman at third. Rick Ankiel's up next, 8 for 22 against Dickey when the AB starts, and 9 for 23 after an RBI single through second that finds its way up the middle with Mets' 2B just Turner playing the left-handed batter to pull. Zim scores on Ankiel's single and it's 2-0 Nationals in the 6th.

1. Abrupt End, Lombardozzi's First: Ross Detwiler sets R.A. Dickey and Jose Reyes down for the first two outs of the Mets' sixth, but the Nats' lefty gives up back-to-back two-out walks to Justin Turner and Lucas Duda, breaking a streak of twelve-straight New York batters retired. David Wright singles to center on the first pitch he sees to get the Mets on the board, down 2-1, and an RBI double by Angel Pagan ties it at 2-2. Detwiler's done: 5.2 IP, 3 H, 2 R, 2 ER, 3 BB, 2 K's, 83 pitches, 51 strikes. Wilson Ramos improves to 9 for 13 against Dickey (2 for 3 tonight) with a leadoff single to start the Nats' 7th. A wild pitch and productive groundout move the Nats' catcher around to third, and Stephen Lombardozzi goes with a 1-1 knuckler and sends an RBI single into left for his first Major League hit and a 3-2 Nats' lead after six and a half. Congrats, Lombo!

0. Clipp And Store: 11 pitches, 9 strikes for Tyler Clippard in a 1-2-3 seventh. The Nationals fail to add to their lead and their All-Star reliever comes back out for the eighth, setting three more Mets down in a seven-pitch, 1-2-3 frame in Citi Field. 6 up and down for Clippard. 3-2 Nationals after eight and a half and they bring Drew Storen on looking for save no. 35 of 2011, and his first save since August 22nd. David Wright walks on four pitches and takes second on a sac bunt by Angel Pagan. Storen gets up 0-2 on Jason Bay, and gets a backwards K with a filthy 1-2 slider. Two down, and Nick Evans pops a 1-1 change up to first, 3 outs. 3-2 Nats. 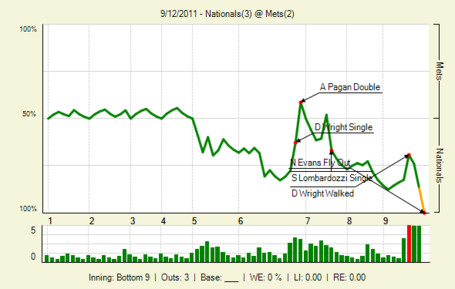