5. 9-8 Nats After 17: Michael Morse misjudges what should probably be out number one, and a fly ball to left by Ruben Tejada gets over the Nats' left fielder's head for a leadoff double to start the bottom of the first of the last game of 2011 between the Washington Nationals and New York Mets. Mets' second baseman Justin Turner takes the first walk in three starts by Nats' lefty Tommy Milone, but the 24-year-old rookie jams David Wright with an 0-1 fastball and starts a 1-4-3 DP before striking Jason Bay out with a 2-2 change to end a 16-pitch bottom of the first in Citi Field. The Nats go down in order to Mets' right-hander Chris Schwinden in a quick 12-pitch second, and Milone walks NY center fielder Angel Pagan to start the bottom of the frame as rain starts to fall at Citi Field. After waiting to see if it passes (it doesn't) the tarp is rolled out (too late) at 1:37 pm EDT with a runner on first and Mets' outfielder Nick Evans up...

4. 40 Minutes Later: Tom Milone paints the outside corner with an 86 mph 1-0 fastball, then gets a weak grounder to third from Nick Evans with a 1-1 slider. One down in the second. Former Montreal Expo Valentino Pascucci grounds to third too. Two down, and Milone opts to walk Ronny Paulino to get to the opposing pitcher. The Nats' lefty then drops a 0-2 curve in on Chris Schwinden and gets a called strike three to end his second scoreless frame in Citi Field.

After another quick inning at the plate by the Nats, Milone throws a five-pitch frame in the third, which leaves the rookie starter at 38 pitches, 22 strikes after 3.0 scoreless innings against New York. MIlone gets a swinging K with a 2-2 change to Jason Bay in the fourth after a 1-2-3 top of the frame by Schwinden, and the Nats' lefty pulls out his A-pick move to catch Angel Pagan off-guard and pick him off after a one-out single by the Mets' outfielder. Nick Evans flies to deep center, but Rick Ankiel tracks it down. 4.0 scoreless for Milone, still no run-support. 0-0 in NY.

3. Former Expo: Back-to-back bunts by Wilson Ramos and Tommy Milone, a swinging one by Ramos and a sac bunt by the pitcher, and the Nats have a runner on second with one down in the fifth. A line drive single to right by Ian Desmond makes it first and third, and an error by Mets' first baseman Valentino Pascucci on a roller toward first allows Ramos to score on what should've been a groundout by Rick Ankiel. 1-0 Nats. Desmond takes third on the error and scores on a sac fly to left-center by Ryan Zimmerman, 2-0 Nats in the 5th.

Pascucci pops an 87 mph 2-2 cutter up to first base. Milone gets a swinging K from Ronny Paulino with a full-count two-seamer, and pinch hitter Josh Satin grounds out to second to end a 13-pitch 1-2-3 fifth by Milone a half-inning after the Nationals took the lead.

2. Bury The 0-2 Pitch, Bally: Milone's rolling through another frame, getting the first two outs of the sixth on three pitches, but a two-out single by David Wright ends the left-hander's outing after 5.2 IP, 3 H, 1 R, 1 ER, 3 BB, 4 K's, 73 pitches, 46 strikes, 6 groundouts and 3 fly ball outs. Collin Balester replaces Milone with Jason Bay, who was 0 for 2 with 2 K's against Milone, due up, and the Nats' right-hander hangs an 0-2 slider that the Mets' outfielder destroys, flying to deep left and off the top of the wall for an RBI double that cuts the Nationals' lead in half. Balester holds the Mets there though and it's 2-1 Washington after 6.0 innings in NY.

1. BALK!: Stephen Lombardozzi connects with a 1-1 change from Mets' reliever D.J. Carrasco, sending his second MLB hit out to left field for a one-out single, and the Nats' infielder is running when Ian Desmond shoots a hit-and-run single through the left side of the infield. Lombardozzi goes first-to-third™ to put runners on the corners. Daniel Ray Herrera comes out of the pen, so Nats' Skipper Davey Johnson turns to Jonny Gomes against the left-hander. Herrera...balks in a run. 3-1 Nationals.

0. B-pen: Henry "Lightning" Rodriguez gives up a one-out walk to Ronny Paulino, throws a wild pitch to move the Mets' catcher into scoring postition and issues another walk to Lucas Duda before popping up Ruben Tejada. Two down. Rodriguez throws a first-pitch curve by Wilson Ramos, moving both runners up to second and third, before a two-out walk to Justin Turner loads the bases for David Wright. Todd Coffey sprints in and pops David Wright up to left to leave'em stranded.

Chris Marrero grounds into a force at second after a leadoff single by Danny Espinosa in the Nats' eighth. Marrero takes third on a Wilson Ramos double off Pedro Beato, and scores on a bases-loaded single by Ian Desmond that makes it 4-1 Washington. Ramos scores when the Mets can't turn a DP on a Jonny Gomes' grounder, and it's 5-1 Nationals. Ryan Zimmerman doubles in the sixth run, 6-1. Tyler Clippard gives up a leadoff double by Jason Bay, who's still on second three outs later when Clippard finishes the eighth. 8-1 Nationals after an RBI sac fly by Chris Marrero and an RBI single by Wilson Ramos, and a two-run double by Ian Desmond makes it 10-1 Nats. Desi goes 5 for 6 with 3 RBI's. Sean Burnett throws a scoreless ninth, and the Nats win four in a row in NY. Five in a row overall. SWEEEEEP!! Milone's first MLB win. 10-1 final. 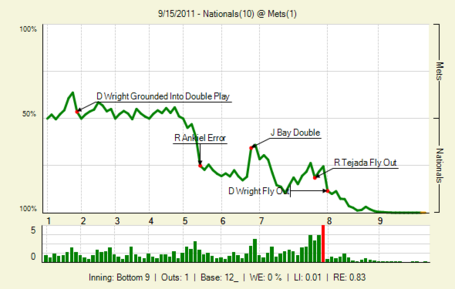