Lannan looks like he might be in trouble in the first tonight, as he gives up a leadoff single by Emilio Bonifacio before walking Omar Infante. Roger Bernadina dives to catch a Mike Stanton liner, however, and Ryan Zimmerman turns a slick 5-3 DP on a grounder to third to end the top of the first after 17 pitches by the Nats' lefty...

4. Stanton = Monster: Lannan issues back-to-back one-out walks to Marlins' first baseman Gaby Sanchez and outfielder Bryan Petersen in the second, and throws a wild pitch that moves both runners into scoring position so John Buck's bloop single to short center gives Florida a 1-0 lead after one and a half. Javier Vazquez gives up back-to-back one-out singles by Rick Ankiel and Danny Espinosa in the Nats' second, but Espinosa's thrown out at second trying to stretch it into a double and two pitches later Chris Marrero flies to right to end the Marlins' starter's second nine-pitch frame. Omar Infante starts the third with a double down the line in left, and Mike Stanton hits an RBI double to right-center in the next AB to improve to 26 for 79 with 7 doubles and 9 HR's in 24 games against the #Nats, 21 for 48 with all seven doubles and all but one of the HR's by the Marlins' 21-year-old outfielder hit in Nats Park. 2-0 Marlins. Make that 3-0 when Gaby Sanchez singles Stanton in.

3. Vazquez Is OE, Original Expo: The Washington Nationals go down in order on 10 pitches by Javier Vazquez in the fourth. The Montreal Expos' 1994 5th Round pick retires seven in a row after Espinosa's thrown out trying to stretch his single into a double in the second. John Lannan gives up a leadoff single by Mike Stanton (22 for 49), but nothing else in a scoreless top of the fifth, but the left-hander's up to 81 pitches after 5.0 to Vazquez's 36 after 4.0 IP. Chris Marrero's two-out infield single breaks the Marlins' starter's retired-batters streak at nine, but Wilson Ramos' groundout to second ends the Fish right-hander's fifth scoreless frame after 10 pitches, 46 pitches total through 5.0. After a 15-pitch 1-2-3 top of the 6th, Lannan's done: 6.0, 8 H, 3 R, 3 ER, 3 BB, 1 K, 9 groundouts, 2 flyouts, 96 pitches, 64 strikes.

2. E:6: Ian Desmond has to rush on a sharp grounder to short by Emilio Bonifacio in the 7th, and he bobbles and drops it. Leadoff runner on against Craig Stammen. Error no. 23 on the year by Ian Desmond, 19 fielding errors and just 4 throwing for Desi. In 2010 the Nats' shortstop had 34 errors total, 21 fielding and 13 throwing. Bonifacio steals second, his 38th SB of the year, but he's stranded at second three outs later. Ryan Zimmerman and Laynce Nix hit back-to-back singles off Javier Vazquez in the bottom of the seventh, but the right-hander strikes out Rick Ankiel and Danny Espinosa and Nix's pinch runner, Brian Bixler, gets picked off first by Fish backstop John Buck. 3 outs, 3-0 Marlins after seven.

1. Dominated By Javy: Javier Vazquez is still out there in the eighth, and he gets the first two outs on five pitches. Rookie Nats' infielder Stephen Lombardozzi battles in an 8-pitch at bat, but grounds out to second to end Vazquez's 8th scoreless frame tonight, and 17th scoreless overall stretching back to the fourth inning of a 9/5 outing two starts back. The Marlins' right-hander's allowed just one ER in his last four starts. Nats' reliever Yunesky Maya gives up a leadoff single, sac bunt and one-out single to put runners on first and third in the Marlins' ninth, but rookie third baseman Matt Dominguez grounds to third allowing Zimmerman to get the lead runner in a rundown, before throwing to second for a 5-2-4 inning-ender. Ian Desmond, Roger Bernadina and Ryan Zimmerman go down in order in the 9th, 18.0 scoreless for Vazquez. Complete game no. 27 of the 34-year-old right-hander's 14-year career, shutout no. 7. Marlins win, 3-0 final.

• Miss The Game? The DC Faithful Suffered Through It... 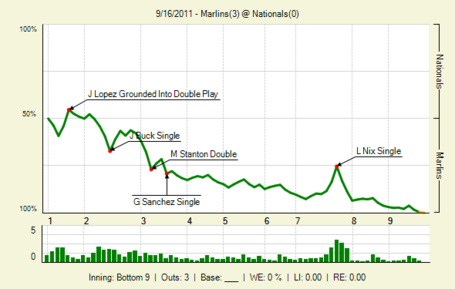