5. 92 MPH? Maybe Gun Was Broken: Emilio Bonifacio battled Stephen Strasburg for eight pitches before popping out to short left in the first at bat tonight, but the radar gun readings are what everyone was watching to see if the noted lack of velocity in Strasburg's last start continued. Those questions were answered early as the Nats' '09 no.1 overall pick was throwing heat in the high 90's throughout that first AB. A two-pitch at bat with Omar Infante ended in a weak groundout to short, then Strasburg took Mike Stanton out, starting the hard-hitting Marlin with a 98 mph fastball for a called strike, then following up with more of the same, hitting the low corner outside for strike two before dialing it up to 99 and going upstairs to get the 21-year-old slugger chasing for out no. 3 of a 13-pitch frame. After the Nationals go down in order in the bottom of the first, Strasburg comes back with a 16-pitch second in which he surrenders a leadoff single by Logan Morrison, who lines a 96 mph 1-1 fastball to right, and a two-out single to John Buck, on a hanging 0-2 curve, before a force at second on a Matt Dominguez grounder ends Strasburg's second scoreless frame. 29 pitches, 19 strikes after two, 25 fastballs, a change and three curves...

4. DIY Stras: The Marlins walk Wilson Ramos to load the bases with Strasburg due up and two down in the Nats' second. Fish right-hander Chris Volstad gets Strasburg swinging to end the second, then leads off the third with a double to center and off the out-of-town scoreboard that Jayson Werth can't catch. A sac bunt by Emilio Bonifacio moves Volstad to third and he tags and scores on a fly to left by Omar Infante, 1-0 Marlins. Two outs. Strasburg strikes Mike Stanton out with a low 0-2 change and he's through the third on eight pitches, and he's at 38 pitches total after 3.0 IP. Ian Desmond walks to start the Nats' third, but Roger Bernadina grounds into a force at second and then gets picked off first. Two down, and three out after Ryan Zimmerman grounds to third. 1-0 Fish after three.

3. Ramos Pimps HR's: An 11-pitch 1-2-3 fourth by Strasburg ends when he gets a foul-tip strike three from Marlins' outfielder Bryan Petersen with a 90 mph 1-2 change after missing with a 97 mph 0-2 fastball. The Nats' right-hander's at 48 pitches, 36 strikes after 4.0 IP. The Nationals come up empty for the 13th straight inning this series as Chris Volstad throws a quick fourth, retiring three in a row after Michael Morse's leadoff single. Stephen Strasburg surrenders a single on the first pitch of the fifth when John Buck lines to left, but Matt Dominguez grounds to short on pitch number two of the inning and Chris Volstad flies out to right to end a 5-pitch frame for Strasburg, who's at 53 pitches, 40 strikes after 5.0 IP. One pitch later, it's tied! Wilson Ramos crushes a first-pitch fastball from Chris Volstad and sends it out to the Red Porch seats in center field. HR no. 13 of 2011 for Ramos, 1-1 game after 5.0.

2. 6.0 And Out: Emilio Bonifaco flies out to left. Omar Infante grounds out to second. Mike Stanton grounds to short. Eight-pitch, 1-2-3 sixth for Stephen Strasburg, who's retired 11 of the last 12 batters he's faced, with John Buck's single in the 5th the only hit since Volstad's leadoff double in the third. Michael Morse hits a one-out ground-rule double into the left field bullpen, but he's stranded at second two outs later. Strasburg's replaced by Henry Rodriguez after 6.0 IP. Strasburg's line: 6.0 IP, 4 H, 1 R, 1 ER, 3 K's, 0 BB, 61 pitches, 45 strikes, 7/6 GO/FO. 21 batters faced. 1-1 game in 7th. Henry "Lightning" Rodriguez takes over in the seventh and throws a 10-pitch 1-2-3 frame. Still tied at 1-1 after seven.

1. [Coffey Sprints To Mound]: Nats' right-hander Todd Coffey gives up a two-out single to pinch hitter John Baker in the top of the eighth, but nothing else as he keeps it tied with a 12-pitch scoreless inning in relief. Fish reliever Edward Mujica throws a quick 1-2-3 bottom of the inning and the Nationals turn to Drew Storen in the ninth. Omar Infante lines out to short where Ian Desmond makes a fully-extended grab, and Drew Storen blows Mike Stanton and Logan Morrison away in a 17-pitch, 1-2-3 top o' the 9th. Still tied at 1-1 after eight and a half. Edward Mujica retires the Nats in order in the ninth with an assist from Logan Morrison who makes a sliding catch down the left field line before crashing into the wall, hard. Appears to be okay...

0. FREE BASEBALL!!: Sean Burnett surrenders a bloop single to center off Gaby Sanchez's bat to start the top of tenth. A sac bunt moves Sanchez to second, and he takes third on a groundout, but the Nats' left-handed reliever strands Sanchez there when Greg Dobbs grounds to second to end the Marlins' half of the inning. Marlins' right-hander Steve Cishek sidewinds his way to a scoreless bottom of the inning and it's on to the 11th. Collin Balester takes over on the mound for the Nats. Pinch hitter Donnie Murphy flies to left for the first out, but an E4 on Danny Espinosa bobbles a sharp grounder to second and throws to first a step late allowing Emilio Bonifacio on. Balester gets Omar Infante to pop out to Roger Bernadina in right and Mike Stanton's 0 for 5 with 4 K's after Balester strikes him out with an 0-2 curve in the dirt.

-1. MONGOOSE?: Ian Desmond turned toward second and was tagged out after a throwing error on a grounder in the first. This time the Nats' shortstop gets it right, taking second after Marlins' reliever Steve Cishek throws one way wide of first on Desmond's weak grounder. A sac bunt by Roger Bernadina moves Desmond to third, but the Marlins walk Ryan Zimmerman to get to Michael Morse. Morse is first-pitch swinging, and he grounds into an inning-ending 6-4-3. Collin Balester strikes out two and gets a fly to deep center to end his second scoreless inning in relief. Marlins' right-hander Clay Hensley strikes out the side in the bottom of the twelfth as Werth, Espinosa and Marrero all K swinging, and it's on to the 13th. Collin Balester gives up a leadoff single to left in his third inning of work, and after collecting his fourth K, gives up HR no. 1 off 2011 by Donnie Murphy, who crushes a 94 mph 1-1 fastball. Line drive to left and into the visitor's bullpen. Two-run HR, 3-1 Marlins. Mike Stanton doubles off the left field wall to drive in another run, 4-1. Leo Nunez retires the Nats in order in the bottom of the thirteenth frame, 4-1 final. 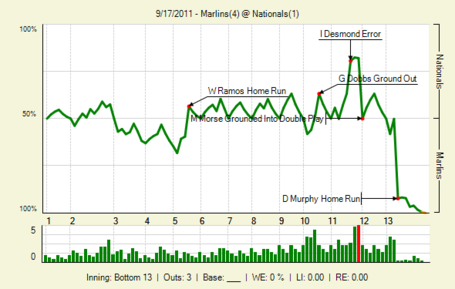