5. "Aloha, Mr. Hand." - Jeff Spicoli: After a quick 14-pitch 1-2-3 first from Washington Nationals' starter Chien-Ming Wang, Florida Marlins' lefty Brad Hand took the mound in Nationals Park against a Nats team that enters today's game with a .226/.310/.350 slash against left-handers this year. The Nationals' team AVG is NL's worst, their OBP 13th of 16, SLG 15th of 16 NL Teams. The Fish lefty surrendered a two-out double by Ryan Zimmerman that bounced off the top of the out-of-town scoreboard, but Michael Morse's pop fly to right ended a scoreless first for both teams. Chien-Ming Wang retired the Marlins' in order on 14 pitches in the second, sending six straight back to the bench. Jonny Gomes connected for the second double of the day off Hand in the home-half of the frame, and got himself over to third on a groundout by Danny Espinosa before scoring ahead of a throw in from right by Mike Stanton on a sac fly by Chris Marrero that gave the Nationals an early 1-0 lead...

4. Who Is This Taiwanese Sinker-Baller?: The first hit off Chien-Ming Wang is, of course, by the opposing pitcher, Brad Hand, who sends a 2-1 sinker back up the middle for a two-out single. Wang strands the Marlins' starter at first, however, when he pops Emilio Bonifacio up to end his third scoreless frame. Wang's 14-pitch third has him at 40 pitches, 25 strikes after three. The Nats go down in order with Wang almost getting his first MLB hit on a pop to right that Mike Stanton grabs. Ian Desmond and Jayson Werth both go down looking for outs no. 2 and 3. Back on the mound, Chien-Ming Wang throws a nine-pitch 1-2-3 fourth, recording his third K and ending the inning at 49 pitches with a 1-0 lead.

3. Does This Count As An Offensive Explosion?: Ryan Zimmerman sends his 21st double of 2011 screaming by third and into left for the Nats' second double of the day off the Marlins' left-hander Brad Hand. Michael Morse walks to put two on for Jonny Gomes, who K's, but Right Side Danny Espinosa comes through with an RBI single to center that scores Zimmerman and an error on Marlins' center fielder Bryan Petersen allows Morse to come around while Espinosa takes third. 3-0 Nationals. 4-0 on an RBI ground-rule double to right by Chris Marrero, who drives in his second run of the game. Chien-Ming Wang's shutout bid ends one pitch into the 5th when Gaby Sanchez sends a first-pitch slider soaring out to left to make it 4-1, but three batters and three outs later, Wang's through the 5th on 59 pitches, with his 4th K of the day, tying a season-high. 4-1 Nationals after four and a half.

2. Abrupt End: Danny Espinosa can't come up with a sharp one-out grounder to second off Emilio Bonifacio's bat, and one out later Marlins' slugger Mike Stanton sends a hard-hit single through short to put two on with two down. Wang gets a groundout to first to end the the top of the sixth though, and the right-hander preserves the Nats' three-run lead through five and half. 80 pitches, 50 strikes, 4 H, 1 R, 1 ER, 0 BB, 4 K's, 7/2 GO/FO through six for Wang. After a quick 1-2-3 bottom of the sixth by Fish right-hander Jose Ceda, Wang's back out for the seventh. Gaby Sanchez goes down swinging to start the inning, and that's a season-high in K's for Wang, and the most he's recorded in a game since June 4, 2009 with the Yankees. Marlins' outfielder Bryan Petersen gets a one-out single under a diving Ian Desmond and one-out later Fish catcher Brett Hayes gets the Marlins within one with a two-run blast on a 1-1 sinker. Line drive HR, 4-3 game. Wang's done: 6.2 IP, 6 H, 3 R, 3 ER, 0 BB, 5 K's, 2 HR's, 93 pitches, 60 strikes, 7/3 GO/FO.

1. Stanton Acts Like Jeter: Tyler Clippard gets the final out of the Marlins' seventh. Still 4-3 Washington. Florida right-hander Ryan Webb retires the Nats in order on eight pitches in the bottom of the frame, and the Nationals' All-Star reliever is back out for another inning or work. Emilio Bonifacio K's swinging. Omar Infante lines out to center. Mike Stanton...takes one on the elbow. HBP...apparently not. Ruled a foul ball, and an angry Clippard blows the Marlins' outfielder away with a 92 mph 2-2 fastball. 1-2-3 eighth for Clippard and another 1-2-3 frame from the Marlins' Webb in the bottom of the inning. Still 4-3 Nats. Drew Storen comes on to close it in the top of the ninth. Greg Dobbs flies out to Roger Bernadina in left. ONE! Gaby Sanchez sends a sharp one-hopper to Ryan Zimmerman at third. TWO!! Bryan Petersen gets a 95 mph fastball for strike one. 85 on a slider inside for a swinging strike two and an 0-2 slider outside for a called strike three. Stare at it, Bryan! Nats win, salvage the finale of the three-game series with the Fish. 4-3 final. 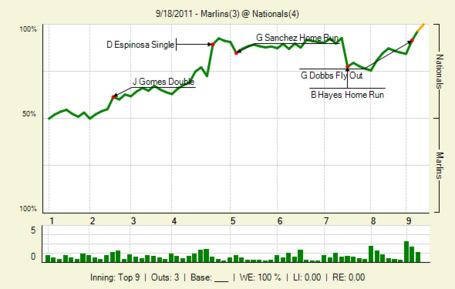