5. Wright's 1st: Nats' starter Ross Detwiler jams Jose Reyes with a two-strike fastball inside but the resultant grounder dribbles by the mound and rolls too far toward first for the 25-year-old left-hander to make the play. Infield single for Reyes. Justin Turner takes a 1-0 sinker to left for a line drive single to put the first two runners on, and one out later, on another 1-0 pitch, this one to David Wright, Detwiler gives up a blast that puts the Mets up 3-0 early when the New York third basemann sends it sailing out to left-center into the Red Porch seats for his 12th HR of the year and his first in 140 career plate appearances in Nationals Park. R.A. Dickey surrenders a one-out double to right by Rick Ankiel and one out later the Mets' knuckler gives up an RBI single over second by Michael Morse, who drives in the Nats first run of the night to make it 3-1 New York after one in Washington...

4. No More 1-0!!: Mets' first baseman Nick Evans gets hold of another 1-0 pitch from Ross Detwiler and this one ends up in the visitor's bullpen in left. Michael Morse takes a few steps toward the track then turns back. Solo shot, 4-1 New York. Chris Marrero takes R.A. Dickey's first pitch of the second back up the middle for a leadoff single and Wilson Ramos drops a single into short-center. The Mets' knuckler buckles down, however, retiring the next three batters in order to strand both runners and preserve New York's three-run lead through two. In the top of the third, Ross Detwiler gets up 0-2 on Lucas Duda and hangs a curve that's drilled to right for a single, and David Wright's down 0-2 when he lines a double to left. Detwiler breaks Angel Pagan's bat, but the Mets' outfielder's bloop single drops into center for a two-run single and a 6-1 New York lead.

3. Quick Hook, 9-3: Ross Detwiler's done after 3.0 IP, 7 hits, 6 runs, 2 K's, 2 HR's, 48 pitches, 34 strikes. Didn't have it tonight. Nats' right-hander Collin Balester throws a quick 8-pitch 1-2-3 fourth against New York, and after Washington wastes a leadoff single by Jayson Werth in the bottom of the frame, Bally's back on the mound in Nats Park and he gives up a one-out walk to David Wright. Angel Pagan flies to right and Wright must think it's gone because he goes too far around second and gets doubled up at first on a strong throw in from the track in right by Jayson Werth. 9-3 putout. And it gets the Nats going...

2. The Arm Goes Yard: Ian Desmond strokes what looks like a double to the right-center gap in the Nats' fifth, but he's thinking triple out of the box and he takes it. Desi beats the throw in from right to third, and then takes it easy on the way home courtesy of Rick Ankiel's oppo-boppo-blast to left and into the visitor's bullpen. Ankiel jacks a 3-1 fastball to left-center to get the Nats within three. 6-3 Mets after five. Collin Balester completes a third scoreless frame and after 3.0 IP in relief and 33 pitches, he's kept the Nats close enough if the offense can come back.

1. Dunn Country: Collin Balester had 3.2 scoreless before he threw a 1-0 fastball inside to Lucas Duda in the 7th. The Mets' power-hitting right fielder hits one into the second-deck in right, up into Dunn Country. The fan who caught that had no right expecting a HR ball. 7-3 NY after six and a half. Duda's 8th. The Mets' 3rd HR tonight. Brian Bixler singles to start the Nats' half of the seventh and knock R.A. Dickey out of the game. Tim Byrdak strikes Ian Desmond and Rick Ankiel out and he's replaced by Ryota Igarashi, who gives up a single to Zim but strikes out Michael Morse with a full-count splitter to end the inning. Still 7-3 NY.

0. Three-Straight: Mets' rookie Josh Stinson makes his MLB debut with a scoreless eighth in which he strikes out two Nats' batters. Still 7-3 Mets after eight. Henry Rodriguez throws a scoreless top of the ninth, with a four-pitch walk to the Mets' rookie hurler the only blemish. Alex Cora singles to start the Nats' ninth, but Roger Bernadina grounds into a double play in his first at bat after being recalled this afternoon. Two down, but Ian Desmond keeps the inning alive with a two-out single that knocks Stinson out. Daniel Ray Herrera comes on to get the last out and strikes Jonny Gomes out to end it. Swinging K. Mets win, 7-3 final. Nats drop to 10 games under .500...

• Miss The Game? So did most of the DC Faithful...Some Were Watching Though... 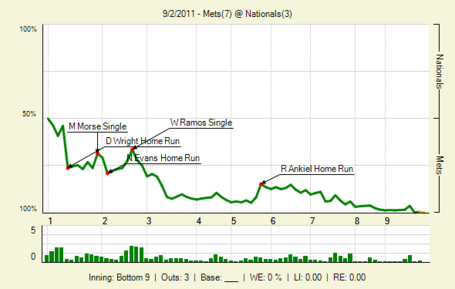