The Philadelphia Phillies, who started play today with a .246/.319/.389 slash against left-handers, got shut out tonight by Washington Nationals' lefty Ross Detwiler, reliever Henry Rodriguez and closer Drew Storen. The Nationals' 25-year-old '07 1st Round pick threw 7.1 scoreless on 81 pitches tonight in Citizens Bank Park, allowing just three hits and a walk as the Nats beat the Phils 3-0 in the night half of the day night doubleheader after another lefty, Tommy Milone, beat Washington's NL East rivals earlier this afternoon.

Detwiler allowed just two hits through seven innings tonight, and erased both Phillies' runners with double plays. In the longest start of the former Missouri State University lefty's career, Detwiler showed signs of why the Washington Nationals drafted him to begin with and have stuck with the starter in spite of his struggles in the last few seasons. When Ben Francisco singled with one down in the 8th, Nats' Skipper Davey Johnson went to the pen for Rodriguez, who got the last two outs of the eighth and Drew Storen, who recorded his second save of the day and 40th save of 2011 in the Nationals' 74th win.

Danny Espinosa provided all the offense the Nationals would need in the top of the second when he hit his 20th HR of the season off Phillies' lefty Cliff Lee. With the solo shot the Nats' second baseman, according to @NationalsPR, "... matched the franchise (1969-pres.) single-season mark for homers by a rookie," and became, "... just the 3rd rookie 2B in MLB history to hit 20 or more HR."

Detwiler drove the Nationals' second run in with an RBI single in the sixth, and Jayson Werth scored the Nats' second run, but suffered an injury on the play. Phillies' catcher Carlos Ruiz tried to catch his former teammate sleeping with a snap throw to third after Werth had doubled and moved up on a Michael Morse single. The pickoff attempt by the catcher bounced off Werth's elbow into foul territory, allowing Werth to score the Nats' third run, but he left the game immediately afterward and was listed as day-to-day with an elbow contusion.

To the frustration of 45,000+ in attendance, the Phillies' offense came up empty, and the win allowed the Nationals to tie the season series with their NL East rivals at 8-8 with two games left tomorrow and Thursday. If Washington can win the next two it would be the first time since 2006 that they've come out on top of Philadelphia at the end of the season. 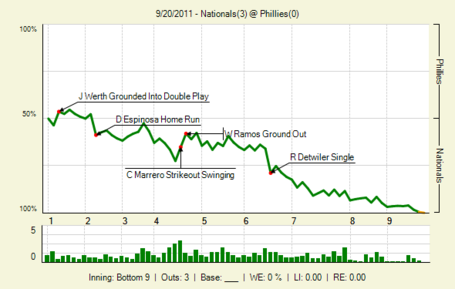