5. Good Lannan/Bad Luck: John Lannan looks calm and composed as he completes a 10-pitch 1-2-3 first in Philadelphia. It's his seventh start in Citizens Bank Park, where the left-hander is (0-5) in his career. When he steps on the mound a second time he has a two-run lead courtesy of Wilson Ramos's oppo-boppo blast off Phillies' right-hander Vance Worley. The Nats' rookie 1B Chris Marrero shoots a 1-1 fastball through second for a one-out single and scores one out later when Ramos goes with a breaking ball away and pushes it out over the right field wall for a two-run HR and a 2-0 Nats' lead after one and a half. The second doesn't go as well for Lannan, who gives up five straight one-out singles and two runs on RBI hits by Phillies' outfielder Ben Francisco and the opposing pitcher, of course. 2-2 game and after a 23-pitch second, Lannan's at 33 pitches...

4. 14 for 26: Raul Ibanez pwns the Nats. And against John Lannan, the left-handed hitting outfielder is 12 for 25 (.480/.519/.880) with two doubles and two HR's and he's 2 for 2 tonight after a two-out single in the top of the third drives John Mayberry, Jr. in and gives Philadelphia the lead. 3-2 Phillies. Mayberry lines a 1-0 fastball over a leaping Ian Desmond at short for a single to left and Ibanez rips a grounder through the left side of the infield to bring Mayberry around and give Philadelphia a 3-2 lead. Lannan gives up a two-out walk in the fourth, but nothing else, and he retires the Phillies in order in the fifth, but still trails by one run in Citizens Bank, having thrown 76 pitches, 51 of them for strikes in 5.0 IP in which he's allowed eight hits, all singles, three runs and a walk.

3. Danny Loves Philly!!: Michael Morse's line drive singl ecomes on a fastball inside from Vance Worley that Morse powers out to right.. Danny Espinosa steps in against the Phillies' right-hander and sends HR no. 21 soaring out to right field and into the Citizens Bank Park seats. Two-run HR, 4-3 Nationals. Danny Espinosa's HR is the 8th HR of his career against the Nats' NL East rivals and his fourth in 11 games in Citizens Bank Park. It's also his second in two games after having gone 16 games and 56 at bats between no.'s 19 and 20. 4-3 Nationals after six. Espinosa's also got a 10-game hit streak going.

2. HBP, BB, E: Phillies' reliever Justin De Fratus throws five pitches in the eighth, hitting Danny Espinosa and walking Chris Marrero to end a quick night on the mound. Philly Skipper Charlie Manuel turns to Antonio Bastardo, and the left-hander jumps all over a bunt attempt by Rick Ankiel, but throws by third trying to cut down the lead runner. Espinosa scores as the ball rolls into foul territory down the left field line. 5-3 Nationals. Wilson Ramos drives Marrero in with an RBI single, but Rick Ankiel stops at third for some reason. 6-3 Nats and 7-3 when Jonny Gomes hits a sac fly to left deep enough for Ankiel to chance it...

1. Atahualp-NO!!!!!: Nationals' left-hander Atahualpa Severino walks the first batter he faces after Washington adds insurance runs and the rookie reliever immediately pays for it. John Mayberry, Jr. battles Severino in a seven-pitch at bat that ends when he launches the seventh pitch to left and deep into the Citizens Bank seats. Two-run HR for Mayberry to pull the Phillies within two after eight innings in Philadelphia. Todd Coffey comes on to end the inning. Still 7-5 Nats after eight and a half and with Drew Storen unavailable after getting a lot of work recently, including two appearances yesterday, the Nats turn to Henry "Lightning" Rodriguez as they try to win their third in a row in Philadelphia.

0. Lightning: Henry Rodriguez, looking for his first major league save, starts the ninth against pinch hitter Ross Gload. A fly to left, where Brian Bixler's placed after getting caught stealing as a pinch runner in the top of the frame, has the Nats' outfielder twisting in the wind, but he somehow manages to make a desperate diving catch. One down. Jimmy Rollins chases a 100 mph 3-2 fastball up out of the zone for out no. 2. Shane Victorino grounds to second, 3 outs. Three straight wins in Philadelphia. Four straight overall. Seventh in a row on the road. Lannan wins his first in Citizens Bank Park. Henry Rodriguez earns his first save in the majors. Nats earn at least a tie in the season series with the Phillies by taking a 9-8 lead with one game left in 2011. 7-5 final. 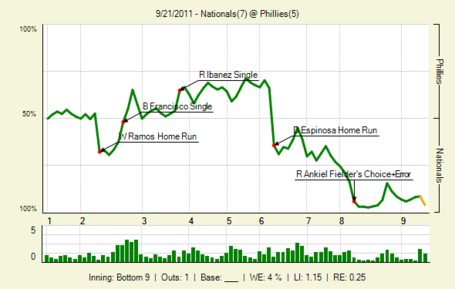