5. The Name Is Peacock, Brad Peacock: Brad Peacock gives up three fly balls to left in an 11-pitch 1-2-3 first. Roy Oswalt needs just 20 pitches, 11 in the first and nine in the second to retire the first six Nationals he faces in the 18th and final game between Washington and Philadelphia in 2011. The first hit for either team is a two-out single by Carlos Ruiz in the bottom of the second, and a throwing error by Ryan Zimmerman gives the Phillies their first RISP opportunity against Peacock, who calmly pops outfielder John Bowker up to end his second scoreless in CBP. Rick Ankiel doubles for the Nats' first hit on the first pitch of the third. Jesus Flores battles Oswalt for 11 pitches, fouling off seven 2-2 pitches before striking out, but the next National up, Brad Peacock, moves Ankiel over to third with a groundout. A pop to right by Ian Desmond brings Ankiel home when Chase Utley and John Bowker almost collide tracking it down and let it fall in for an RBI double. 1-0 Nats. Roger Bernadina rips a single through second to bring Desmond around. 2-0 Nationals over the Phillies in Citizens Bank...

4. 9-8-7: Brad Peacock collects his first two K's of the night in an 11-pitch 1-2-3 third against the Phillies that has the Nationals' starter at 32 pitches after three scoreless. Roy Oswalt bounces back from a long 24-pitch third with a quick nine-pitch 1-2-3 fourth. Peacock's up for this matchup and after a fly to center, pop to short, and hard-hit liner to right later he's through an 8-pitch inning that ends with Roger Bernadina making a leaping catch in front of the out-of-town scoreboard in right. 4.0 scoreless. Oswalt's unimpressed with an 8-pitch frame, so he retires the Nationals in order on 7 pitches, leaving the Phillies' right-hander at 60 pitches, 47 strikes after five innings pitched. A 10-pitch 1-2-3 bottom of the inning has Peacock at 50 pitches after 5.0 IP. 2-0 Nationals.

3. Trouble For Peacock: Roy Oswalt needs just six pitches to retire the Nationals in order in the top of the sixth, and he takes a four-pitch one-out walk from Brad Peacock in the bottom of the frame. At this point rally towels come out and the Phillies' faithful start waving them around as Jimmy Rollins works the second straight walk out of the Nationals' rookie. Peacock pops Shane Victorino up for out no.2 of the 6th, and Davey Johnson goes to the pen. Tom Gorzelanny comes on to face Chase Utley. Peacock's line: 5.2 IP, 1 H, 0 R, 0 ER, 2 BB, 69 pitches, 44 strikes, 2 groundouts, 9 fly ball outs. Two runners are his though. Gorzelanny puts Chase Utley on with the third walk of the inning, but the Nationals' left-hander pops Raul Ibanez up to end the bottom of the sixth with the bases loaded. Still 2-0 Nationals after six innings in Philadelphia.

2. [CHOMP!!] CRUSH!!: Tom Gorzelanny gives up a one-out single by Carlos Ruiz. Roger Bernadina tries to dive for it, but it bounces off his glove. Gorzelanny's done. Ryan Mattheus, pitching for the first time since August 5th when he went down with shoulder issues (right shoulder strain), retires the next two Phillies to preserve the Nats' 2-0 lead through seven innings in Citizens Bank. Roy Oswalt retires the Nationals' eight and nine hitters, but Ian Desmond reaches on an infield single for the Nats' first hit since Rick Ankiel's leadoff double in the fifth. Roger Bernadina gets hold of a 2-0 sinker and drives it to center field for an RBI double and a 3-0 Nationals' lead. Roy Oswalt walks Ryan Zimmerman to put two on, then talks his way out of getting pulled in a visit to the mound by Phils' Skipper Charlie Manuel. Oswalt goes to a full count with Michael Morse and gives up a three-run HR to right-center that makes it 6-0 Nats.

1. Davey Gets Booed: Tyler Clippard throws a quick 10-pitch 1-2-3 8th. Doug Slaten takes over in the ninth after the Nationals go down in order against Phillies' right-hander Joe Savery. Chase Utley goes down swinging. One!!! Raul Ibanez grounds weakly to first. Two down. Davey Johnson's showered with boos as he turns to Todd Coffey to get the final out of the inning. John Mayberry keeps hope alive with a two-out double off the third base bag and into foul territory in left. Carlos Ruiz follows with a line drive single to right that scores the Phillies' first run. 6-1. Roger Bernadina throws home allowing the Phillies' catcher to take second. One on, two out for Ben Francisco, who's quickly up 3-0. Francisco pops up to third on a 3-1 pitch, however, and the Nats take their fourth straight for the Citizens Bank sweep! Nats Park North is one angry place! The Nationals win, 6-1 final. The Nats take four-straight in Philadelphia, fifth straight overall, and take the season series with Philadelphia 10-8. The Nationals win back-to-back four-game road series. 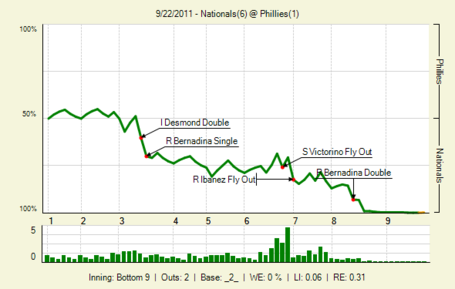