5. Strong, Confident 王建民: Before today's game, Nats' Skipper Davey Johnson once again commented on Chien-Ming Wang's growing confidence in his surgically repaired right shoulder. "I think he's getting more confidence that his shoulder's going to hold up," Johnson said, "and that's the big thing. The last couple of games he's started, he started a lot sharper early in the game, so that tells me he's getting loose easier and he's trusting it, but I think the best is yet to come from him." Wang looks confident and loose early this afternoon as he retires the Braves in order on eight pitches in the first, getting Chipper Jones looking to end the opening frame. Jones knows it's a strike, drops his bat and helmet in the batter's box and walks out to third. After Braves' starter Brandon Beachy retires the Nats in order in the home half of the first, Wang throws his second scoreless on 12 pitches, giving up an opposite field single by Brian McCann, who's eventually thrown out trying to steal second by Pudge Rodriguez. 20 pitches, two scoreless for Chien-Ming Wang in Nats Park...

4. Hit Machine™: Brandon Beachy issues back-to-back one-out walks in the bottom of the second, first to Jayson Werth, after striking Michael Morse out to start the frame, and then to Danny Espinosa after Werth's already stolen second. Chris Marrero's up with one down and two on, and the Nats' rookie first baseman comes through with an RBI single to center. The 23-year-old '06 1st Round pick is now 26 for 92 with 10 RBI's in 26 games since he was called up to make his major league debut back on August 27th. Marrero's also 5 for 20 with 3 doubles when he comes up with runners in scoring position. What the future holds for him is a question mark though with Adam LaRoche under contract and expected back for one more year in the nation's capital. Marrero finished his first year at Triple-A with a .300/.375/.449 slash, 30 doubles and 14 HR's in 127 games and 546 plate appearances.

3. Wang's First HIT!!: Chipper Jones goes with a full-count sinker outside on the eighth pitch of his fourth inning at bat against Chien-Ming Wang and shoots a one-out single into left-center. Ryan Zimmerman stabs a liner off Dan Uggla's bat. Pudge Rodriguez catches a pop behind home by Brian McCann and Chien-Ming Wang's through 4.0 scoreless. A 20-pitch fourth has the right-handed sinker-baller at 56 pitches, 34 strikes with a 1-0 lead. Ryan Zimmerman shoots an opposite field single through second to start the Nats' fourth. One out later, Jayson Werth takes his second walk in two at bats today to put two on for Danny Espinosa. A wild pitch, Beachy's second of the inning, puts both runners in scoring position and Espinosa comes through with a two-run, line drive single to center. 3-0 Nationals. Chipper Jones robs Chris Marrero of a single with a diving play and strong throw, two down, and the Braves walk Pudge Rodriguez to get to Chien-Ming Wang, who steps to the plate 0 for 1 today and 0 for 32 in his career. Make that 1 for 33. RBI single by first, 4-0 Nationals. Wang's first MLB hit.

2. Freddie: The Braves' rookie first baseman Freddie Freeman's got 21 HR's in 2011 after he takes a 3-1 sinker to center, over the W.B. Mason sign and into the Red Porch seats for a solo shot to start the Braves' 5th. Three groundouts later, Chien-Ming Wang's through five innings on 71 pitches, 42 strikes. 4-1 Nationals. Brandon Beachy collects K no. 8 on the day when he gets Rick Ankiel looking to start the bottom of the fifth and gets a double play grounder from Michael Morse after a Ryan Zimmerman single. 4-1 after 5.0. Chien-Ming Wang takes the mound in the sixth and retires the Braves in order on 14 pitches. 85 pitches, 51 strikes, 4 H, 1 R, 1 ER, 0 BB, 4 K's, 1 HR, 8/3 GO/FO and a three-run lead.

1. Pudge Deserves Cheers: Tom Gorzelanny gives up a leadoff walk but nothing else in a scoreless seventh inning. Ivan "Pudge" Rodriguez collects hit no. 2,843 of his career with a leadoff single in the Nats' seventh, leaving him 157 hits away from 3,000. Braves' right-hander Anthony Varvaro strands Pudge at first, however, in a scoreless inning of work. Tyler Clippard gives up a one-out walk to Brooks Conrad and a single by Michael Bourn that puts runners on the corners in the top of the eighth. Bourn tries for steal no. 59 in 71 attempts, but ends up victim no. 13 of the year (in 25 attempts against) as Pudge Rodriguez guns him down at second. 2 for 2 CS for Pudge today. Martin Prado flies to right, 4-1 Nationals after seven and a half.

0. STOREN WARNING!!: Drew Storen takes over in the ninth, looking for save no. 41 of 2011. Chipper Jones grounds out to second. ONE! Dan Uggla reaches on a single in spite of a diving effort by Danny Espinosa. Brian McCann pops up to Desmond behind third. TWO!! Freddie Freeman goes down swinging. Ballgame.

• Miss The Game? The DC Faithful Were Watching...Sorta... 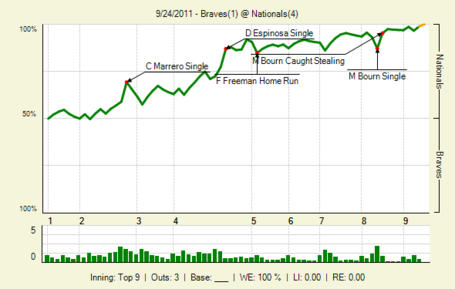