Washington Nationals 3-0 Over Atlanta Braves In Final Home Game Of 2011.

Share All sharing options for: Washington Nationals 3-0 Over Atlanta Braves In Final Home Game Of 2011.

5. Rosswiler: The final home game of the 2011 season started with Washington Nationals' left-hander Ross Detwiler striking Atlanta Braves' leadoff man Michael Bourn out with a 94mph 2-2 fastball for out no.1 and then completing a 14-pitch 1-2-3 top of the first inning in Nationals Park. Ian Desmond starts the Nats' half of the frame with a leadoff double, but three outs (and one walk to Ryan Zimmerman) later, the Nationals' leadoff man is stranded at third. Detwiler's back on the mound, striking out Dan Uggla and Matt Diaz around a flyout to left by Freddie Freeman. 2.0 scoreless, 3 K's on 28 pitches by the Nats' 25-year-old '07 1st Round pick, who has a 9.1-scoreless inning-streak going back to his 7.1 shutout innings in last Tuesday's start against the Phillies. No score after two...

4. Oh, Oh, Oh It's Majik: A single by backup catcher David Ross and back-to-back walks to Jack Wilson and the opposing pitcher Mike Minor, and the Braves have the bases loaded with no one out in the third. Detwiler's struggling to throw strikes, and he goes to a 3-0 count with Michael Bourn before popping the Braves' outfielder up to foul territory in left. No advancement by the Braves' runners. Martin Prado flies out to left, and the Braves' backstop decides not to test Jonny Gomes' arm. Two out. Chipper Jones sends a chopper to third, Ryan Zimmerman fields and throws to second for the force. Crisis averted, 3.0 scoreless by Detwiler. 0-0. Zimmerman and Morse hit back-to-back two-out singles in the Nats' third, but Chris Marrero flies to left to end the inning. Still no score.

3. 8-Spot Pop: A one-out single by Freddie Freeman is erased on a 4-6-3 DP that ends Ross Detwiler's fourth scoreless frame against Atlanta. 69 pitches, 39 strikes for the Nats' lefty. Braves' left-hander Mike Minor gets the first two outs of the Nationals' fourth, and gets two strikes on D.C. backstop Wilson Ramos before the rookie catcher gets hold of a 2-2 curve and sends it out to left on a line and just over the wall into the flower bed above the wall. Solo shot, no. 15 of 2011 for Wilson Ramos, 1-0 Nats. Back on the hill in the 5th, Detwiler gives up back-to-back singles by David Ross and Jack Wilson, and a bunt by Minor puts both runners in scoring position but a sharp liner to second's caught by Danny Espinosa and a fly to right ends the frame. 1-0 Nats after four and a half.

2. Det's Done: After the Nationals come up empty in the fifth, Ross Detwiler retires the Braves in order on 14 pitches to complete his sixth and final inning this afternoon. Detwiler's Line: 6.0 IP, 4 H, 0 R, 2 BB, 4 K's, 92 pitches, 56 strikes, 5/5 GO/FO. Danny Espinosa doubles off the 402ft sign in center to start the Nationals' sixth, but two outs later he's still standing on second when the Nats pinch hit for Detwiler with Rick Ankiel, who grounds out to first to end the sixth. Still 1-0 Nationals. That's 0 for 10 w/ RISP today for the Nats.

1. Lightning Strikes: Henry "Lightning" Rodriguez plows through the Atlanta Braves in the seventh, striking out the side on 11 pitches, but the last one is the most impressive as the flamethrowing right-hander dials it up against Braves' shortstop Jack Wilson. 100, 101, 101 and then down to 88mph with a 1-2 slider for a called strike three. 1-0 #Nats in the seventh. Make that 3-0!! MORSE CRUSH!! After a trademark two-out single™ by Ryan Zimmerman in the Nationals' half of the inning, Michael Morse goes with an 0-2 fastball and sends it out to right for an oppo-boppo two-run blast. 3-0 Nationals on Morse's 29th. The fans want a curtain call and Morse gives it to them.

0. Clipp And Store: Tyler Clippard retires the side in order on nine pitches in the top of the 8th, striking out two, both of them looking around a flyout to left. 3-0 Nationals after seven and a half. The Nats go down in order in the eighth and it's Drew Storen's turn to try to earn save no. 42 of 2011 and win no. 78 on the season for the Nationals. Chipper Jones stares a 2-2 slider in over the outside edge. Called strike three. ONE!!! Dan Uggla grounds toward third, Ryan Zimmerman cuts it off, spins and makes an off-balance throw to first where Chris Marrero makes a full-stretch catch for out no. 2. TWO!!! Freddie Freeman grounds out to second. 1-2-3 The Nationals win!!!! Ballgame. Nats win, 3-0 final. 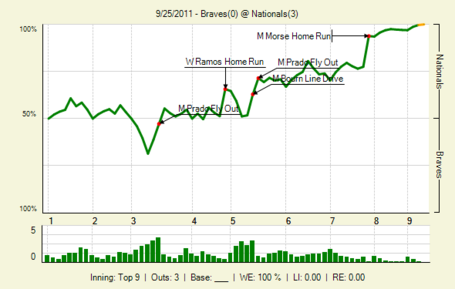