• The Surprising Rain In Florida Top 5:

5. Unexpected Delay: About 57 minutes after the 7:10 scheduled start time, the Florida Marlins and visiting Washington Nationals start the first game of the final series of both teams' 2011 season. Fish starter Anibal Sanchez struggles with his control early, walking Ian Desmond in first at bat, but he gets a 6-4-3 DP from Rick Ankiel and gets Ryan Zimmerman swinging to end the top of the first after 14 pitches. Marlins' leadoff man Emilio Bonifacio singles through the middle of the infield to start Florida's first, but three outs later he's stranded at first when Nats' lefty Tommy Milone retires the next three Marlins in order, striking out Omar Infante and Mike Stanton before Gaby Sanchez grounds out to third. Jayson Werth singles off Sanchez in the second, and he and Danny Espinosa pull a double steal after a walk to the Nats' second baseman. Second and third for Chris Marrero, a Florida kid who has his own cheering section tonight in Sun Life Stadium, but Marrero goes down swinging and the Marlins decide load the bases with two down, walking Wilson Ramos to get to Milone, who flies out to center. No score in the second.

4. HR vs E6, SB, Balk, Tied: Logan Morrison sends an 87 mph 1-1 fastball from Tommy Milone out to right and six rows deep into the sparsely populated outfield seats in Sun Life Stadiu_. HR no. 23 of 2011 for the second-year Fish outfielder. Three quick outs later, Milone, the Nationals' 24-year-old left-hander's through an 18-pitch second. Ian Desmond reaches on an error by Emilio Bonifacio to start the Nats' third then steals second. Stolen base no. 25 of 2011 for Desmond, who takes third on a balk and scores on a Rick Ankiel groundout. 1-1 game. Tommy Milone gets the first two outs of the Marlins' third on five pitches, but a two-out triple by Omar Infante on a fly to center Rick Ankiel can't reach and a sharp grounder to third by Mike Stanton that Ryan Zimmerman can't stab give the Marlins a 2-1 lead.

3. "Magic Pants!" - Mrs. D: Ian Desmond's making things happen in Florida, and doing so in tighter-than-usual pants. Desmond's 27th double of 2011 drives Wilson Ramos in from second after a one-out single by the Nats' catcher and a sac bunt by Tommy Milone in the fourth. 2-2 game on Desmond's double, and 3-2 when the Nats' shortstop comes around to score on a single to center by Rick Ankiel. Tommy Milone gives up a leadoff double to left by Logan Morrison that somehow doesn't clear the high wall in left field. Double no. 25 of the year by Morrison, who hit HR no. 23 to right field in the Marlins' second. Three outs later, Milone strands LoMo at second, however, and the Nats' lefty's at 68 pitches after a 17-pitch fourth.

2. Bases Loaded WP: Marlins' 5th, Vinny Rotino singles and Emilio Bonifacio reaches on a bunt to first that Chris Marrero mishandles. Not an E, but it turns a sac into a single. Omar Infante bunts to third where Zim does his thing(s), fielding and throwing as he charges in. One out. An intentional walk to Mike Stanton ends Tommy Milone's night. Craig Stammen's on with the bases loaded and one down. Gaby Sanchez pops out foul of first for out no.2, but Stammen bounces an 0-2 slider to Logan Morrison and it gets by Wilson Ramos allowing Rotino to score from third and tie it. 3-3 after 5.0. Milone's Line: 4.1 IP, 7 H, 3 R, 3 ER, 1 BB, 4 K's, 1 HR, 82 pitches, 56 strikes, 3/1 GO/FO.

1. [Coffey Doesn't Sprint In]: It takes Nats' reliever Craig Stammen 14 pitches to strike out the side in the Marlins' sixth. Fish reliever Ryan Webb gets three groundouts to second in his second inning of work in relief of Anibal Sanchez. Washington right-hander Ryan Mattheus gets three grounders to short, but just two outs in the Marlins' seventh, the third is deep enough in the hole at short that Omar Infante beats Ian Desmond's throw to first for a two-out single. Mattheus is replaced by Todd Coffey, who doesn't sprint in from the 'pen, walks Mike Stanton, and gives up a two-out RBI single to right by Gaby Sanchez that breaks the tie. 4-3 Fish after seven in Sun Life.

0. MORSE CRUSH!!!: Chris Marrero's replaced by Brian Bixler after singling with one down, but Bixler's erased on an inning-ending DP grounder by Wilson Ramos. A scoreless eighth by Marlins' right-hander Steve Cishek is followed by a scoreless frame by Atahualpa Severino and with the Marlins' usual closer out of the country, Edward Mujica's on to close out Florida's 11th win in 16 games against Washington. Laynce Nix starts the ninth with a pinch hit single to left. Roger Bernadina runs for Nix, and takes second on an Ian Desmond single. Mujica gets Rick Ankiel to chase a two-strike splitter into the dirt. One down. Ryan Zimmerman grounds out to short, but Davey Johnson had the runners going, so an out at first, and two on and two out, runners on first and third for Michael Morse. MORSE CRUSH!!! Michael Morse takes a 1-1 splitter deeeeeeeeeep to left and GONE! GONE!! GONE!!! 3-run HR! No. 30 on the year for Morse! 6-4 Nationals over the Fish in Florida.

-1. Lightning: Henry Rodriguez comes on to close it out. Greg Dobbs singles through short. Emilio Bonifacio rips a grounder to second, but Danny Espinosa dives for it, gets it and shovels to Desmond. One down. The throw to first is too late, but Rodriguez gets the double play from the next batter, Omar Infante. Low liner to second, Espinosa fields it on a hop, backhands it to second, Desmond throws to first, 4-6-3 inning-ending DP!! The Nationals win!! The Nats' ninth-straight road win. Their 79th win of 2011! Henry Rodriguez's 2nd career save. 6-4 final. MMIMH!!

• Miss The Game? The DC Faithful Were Watching...Who Are The Redskins, Again?.... 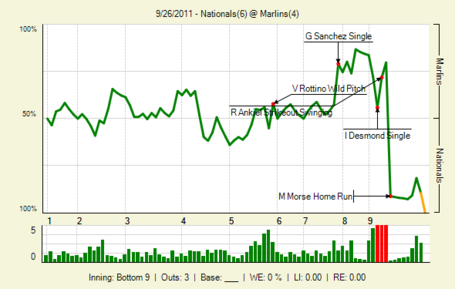