5. K's 1-2: Roger Bernadina's bunt goes back toward the mound and Marlins' starter Chris Volstad is able to cut down the lead runner, Ian Desmond, at second after he'd walked on five pitches in the previous at bat in the opening frame. An 0-2 fastball outside gets Jayson Werth swinging, and the Washington Nationals' big free agent signing is 3 for 31 with 11 K's in his career vs the Florida right-hander and 0 for 1 this afternoon. Bottom of the inning, Stephen Strasburg starts his final start of 2011 with a 95 mph fastball for a called strike on Emilio Bonifacio and follows up with an 80 mph curve to get ahead 0-2. A 2-2 curve gets the Fish leadoff man swinging. Omar Infante pops to left where a sliding Bernadina catches the second out. A 97 mph full-count fastball gets Strasburg K no. 2 from Greg Dobbs and he's through a scoreless first on 15 pitches.

4. 0 K's? 19 Pitches: Stephen Strasburg issues a leadoff walk to Mike Stanton after getting up 0-2 and losing the Marlins' slugger. It's the first walk the 23-year-old right-hander's allowed in 19.0 IP since returning to the majors as he rehabs from Tommy John surgery. He allowed three walks in six starts and 20.1 IP in his minor league rehab starts. A 3-6-3 DP on a real nice play by rookie first baseman Chris Marrero erases the leadoff walk. Strasburg gives up a single to Gaby Sanchez and a two-out walk to Bryan Petersen before popping up Fish catcher Brett Hayes to end his second scoreless after 19 pitches. But two walks? Un-Stras-Like.

3. K's 3-7: Ian Desmond reaches on a two-out error in the third, but Chris Volstad retires Roger Bernadina to keep it scoreless through two and a half. Stephen Strasburg dispatches the opposing hurler with a 1-2 curve for his third K of the day. Emilio Bonifacio works the count full and K's on a 96 mph heater. That's four. Omar Infante grounds out to third. 3.0 scoreless for Strasburg, this one on 13 pitches. 47 total, 29 strikes through 3.0 IP. Chris Volstad's up for the challenge, collecting K's three and four for the first two outs of the fourth and retiring Rick Ankiel after a two-out walk to Danny Espinosa to complete four scoreless on 58 pitches. Marlins' 3B Greg Dobbs takes a 1-2 curve for a called strike three. Mike Stanton gets his knees buckled by an over-the-top 1-2 bender. Logan Morrison chases a 1-2 change into the dirt. 7 K's in 4.0 scoreless by Stephen Strasburg.

2. K's 8-10: Stephen Lombardozzi and Pudge Rodriguez hit singles in back-to-back at bats that start the top of the fifth. A sac bunt moves both runners into scoring position and the third hit of the frame, an RBI line drive to center by Ian Desmond, brings Lomboardozzi home to give the Nats a 1-0 lead. Strasburg strikes Gaby Sanchez out with a 1-2 curve that's called strike three. A 97 mph 0-2 heater gets Bryan Petersen swinging for K no. 9. A fly to left gives Strasburg 5.0 scoreless on 69 pitches, 1-0 Nats. Chris Volstad sets the Nationals down in order in the top of the sixth, and Strasburg comes out for one more, collecting his 10th K in a 10-pitch 1-2-3 sixth. Strasburg's Line: 6.0 IP, 1 H, 0 R, 0 ER, 2 BB, 10 K's, 79 P, 54 strikes, 3/2 GO/FO.

1. "I Got It. I Got It. You Get It.": Ryan Mattheus gets the first two outs of the seventh, then walks Logan Morrison in front of Gaby Sanchez, who flies out to right-cen---Rick Ankiel and Jayson Werth converge on the fly and both stop, letting it drop in for an RBI "double" that cuts the Nats' lead in half. Morrison scores, 2-1 Nationals. Sean Burnett gets the final out of the inning, stranding two Marlins and preserving the Nationals' one-run lead. 2-1 after seven. Alex Cora hits for Burnett and triples to right-center and out of the reach of a diving Mike Stanton. One out later, Cora scores on an RBI single by the Shark, Roger Bernadina. 3-1 Nationals. 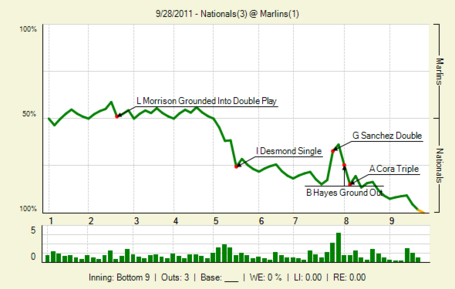