Share All sharing options for: Game 137: Well, that was eventful. 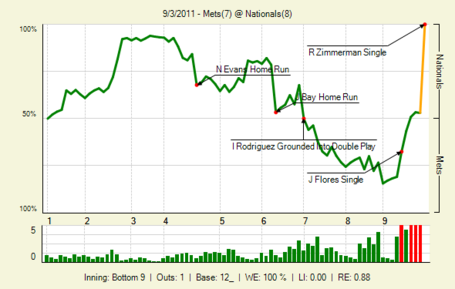 Bonus WE fun after the jump!  Is the "common wisdom" right?

Here are the last few plays of the game with the associated WE:

You know it drives me crazy when position players bunt, but in this case, Desmond's sac bunt increase the team's Win Expectancy (WE) from 50.9% to 53.4%, for +2.5% WPA.  Moving a runner to 3rd with one out (while also removing the chance for a GDP) more than made up for giving away an out in this case.  Walking Bernadina, although it did bring up Zim, actually slightly decreased the WE from 53.4% to 53.0%.  Creating the chance for a GDP made up for putting an extra man on base.