5. 3 Dingers: John Lannan starts slow this afternoon, surrendering back-to-back one-out doubles to Dodgers' second baseman Jamey Carroll and center fielder Matt Kemp in the top of the first. Kemp's 27th two-bagger of 2011 drives Carroll in and gives Los Angeles a 1-0 lead, and the visiting team makes the Nats' lefty throw 27 pitches in the top of the frame. 1-0 after a half. 1-1 four pitches later when Ian Desmond launches a 1-2 slider from LA right-hander Hiroki Kuroda into the left field stands for HR no. 7 on the year by the Nats' shortstop. 1-1 game. After Rick Ankiel singles off Kuroda, Ryan Zimmerman almost sends one out to left, just missing a HR that Tony Gwynn, Jr. catches at the back of the track. Michael Morse does not miss! MORSE CRUSH!! HR no. 25 on the year for the Nationals' LF/1B soars out to left too, as does Jayson Werth's 18th, as the Nats go back-to-back off the Dodger starter. 4-1 Nats on 3 first-inning HR's. First time in 110 starts Kuroda's allowed three HR's in one game...

4. Triple Play? Soooo Close: John Lannan returns to the mound for a 13-pitch, 1-2-3 second, and Kuroda retires the Nats in order too (on 15 pitches) after a long first frame in the nation's capital. A 15-pitch third has Lannan at 55 pitches through 3.0 IP. Kuroda retires the Nats in order as well and after a combined 59-pitch first, the starters have thrown 2.0 scoreless on 53 pitches. Lannan gives up a leadoff walk to Juan Rivera and single by Aaron Miles in the top of the fourth, and the Nationals come a throwing error away from turning a 5-4-3 triple play. Zimmerman fields Russ Mitchell's grounder, steps on third, throws to second, but Danny Espinosa's throw to first is wide and Chris Marrero can't pick it. So close. The Nats settle for a double play and Lannan gets a fly to left from Tony Gwynn Jr. to end the Dodgers' fourth. Still 4-1 Nationals.

3. RHINO: Wilson Ramos connects for his 20th double of 2011 in the Nats' fourth, and the Nationals' backstop's first hit of the day extends his hit streak to nine-straight games over which he's 12 for 33 w/ 5 doubles and 2 HR's. Kuroda strands Ramos at second, however, when he strikes out the opposing pitcher to end the fourth. Lannan then takes the mound and gives up a one-out single but nothing else in an 18-pitch 5th. Still 4-1 Washington. The Nats go down in order in the bottom of the fifth, with Kuroda collecting K's seven and eight of the afternoon. 90 pitches for Lannan, 88 for Kuroda after 5.0 in Nationals Park.

2. 94 And Out: After surrendering a one-out single to Juan Rivera in the 6th, John Lannan gets a visit from Nats' Skipper Davey Johnson, who signals to the bullpen for Collin Balester, lifting Lannan after 5.1 IP, 5 H, 1 R, 1 ER, 2 BB, 4 K's, 94 pitches, 61 strikes, 6/3 GO/FO. Balester pops up Aaron Miles, but gives up a two-out single to James Loney. Davey Johnson goes to the pen again. Tom Gorzelanny's on to face Tony Gwynn, Jr...and Gorzo gets a foul tip strike three with an 0-2 slider. 4-1 Nats after five and a half.

• Davey Johnson on pulling Lannan: "I was going to talk to him," Davey Johnson said when asked if he'd gone to the mound with the intention of pulling the Nats' starter. "But I'd pretty much made up my mind, cause I wanted, with expanded rosters tomorrow, it made it pretty easy to have the two long guys going, and my bullpen was a little bit tired. And I knew what I wanted to do and he said to me, 'Give me one more hitter, I'll get a ground ball, double play,' and all I said was, 'Nice try.' But I liked the fact that he wanted to stay in there."

1. MORSE CRUSH!! AGAIN!!!: It's a 3-2 slider this time. Michael Morse connects for his second HR of the afternoon in the Nats' sixth, taking Hiroki Kuroda deep to left again for his 26th HR of 2011. 2-2 sinker in the first, 3-2 slider in an eight-pitch AB in the sixth, both crushed by the Nats' big middle-of-the-order bat, who's now got more HR's this year than he hit in 10 minor league seasons combined. 5-1 Washington after six in D.C. Tom Gorzelanny and Tyler Clippard get the Nationals through the top of the seventh with a four-run lead.

0. Oppo Ank?: Ian Desmond's 2 for 4 today with a HR and a one-out single after he lines to left in front of a charging Tony Gwynn, Jr. in the seventh. Desi comes around to score on a Rick Ankiel opposite field double to left that falls just inside the line halfway to the left field corner to bring Desmond around. 6-1 Nationals after seven innings in Nats Park. Tyler Clippard throws a 2-2 change by Matt Kemp for a swinging K, pops up Juan Rivera and gets a fly from Aaron Miles to end a 22-pitch scoreless top of the eighth. Jayson Werth reaches on an error in the bottom of the frame and scores from second two outs later on an RBI single by Wilson Ramos that makes it 7-1. Sean Burnett comes on to end it, and gives up a run before finally ending it with a groundout to short. 7-2 Nats win. 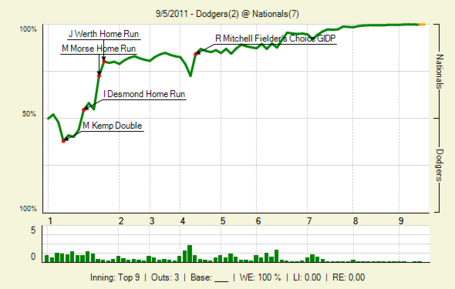