Washington Nationals Drop Game One Of Two With The Los Angeles Dodgers, 7-4.

Share All sharing options for: Washington Nationals Drop Game One Of Two With The Los Angeles Dodgers, 7-4.

5. Not Sinking: Chien-Ming Wang got the ground ball he wanted from the first Dodgers' batter Dee Gordon, but the LA rookie's leadoff single found its way through the right side of the infield. The Washington Nationals' right-handed sinker-baller gets hit hard in the first. Wang gives up the single, a ground-rule double by Los Angeles' first baseman James Loney and after Gordon's caught in a rundown and tagged out on a hotshot to third by Matt Kemp that Ryan Zimmerman expertly backhands, a two-run double by one-time Expo Juan Rivera that puts the Dodgers up 2-0 after a 17-pitch top of the first for the Nats' starter. The right-hander recovers in the second, however, finding his sinker and retiring the Dodgers' batters in order on 11 pitches after LA starter Chad Billingsley's scoreless first...

4. Morse Misjudges It: Chad Billingsley walks Michael Morse to start the Nats' second, and after Jayson Werth flies out to right and Rick Ankiel K's chasing a high fastball, Billingsley issues back-to-back two-out walks to Chris Marrero and Wilson Ramos. The free pass to Washington's catcher brings up Chien-Ming Wang, however, and Wang K's swinging to end a 32-pitch bottom of the second. Gordon and Kemp combine to cause trouble again in the third, with the leadoff man singling again and going first-to-third on Kemp's line drive to right. Then Ryan Zimmerman does it again. Zim fields a weak grounder this time time and throws home to cut Gordon down again. One out. Juan Rivera lines to left...and Michael Morse misjudges it, charging in then leaping at the last moment as it soars over his head. Two runs score, 4-0 Dodgers after a 23-pitch 3rd by Wang.

3. Lomardozzi's AB: After Ian Desmond's single starts the third with the Nationals' first hit off Chad Billingsley, rookie second baseman Stephen Lombardozzi battles the Dodgers' right-hander in a 12-pitch AB, fouling off six two-strike pitches before grounding productively to second and moving Desmond into scoring position so that Ryan Zimmerman's RBI double to right-center drives him in. 4-1 Dodgers. Michael Morse doubles Zim in with a liner to left-center, and Jayson Werth ties it with one swing of his bat, taking a 2-1 slider from Billingsley deeeeeep to left and GONE! Two-run HR. Werth's 19th. 4-4 game. Billingsley gives up a bloop double Rick Ankiel for the Nats' fourth-straight hit and he's lifted after the Nats stretch him to 74 pitches with a 28-pitch third.

2. Werth Robbed: It's still 4-4 in the 5th when Michael Morse walks again to start the bottom of the frame and Jayson Werth almost does it again too, flying to deeeeep right and...into Juan Rivera's glove. The Dodgers' right fielder makes a leaping grab at the out-of-town scoreboard. Upon review, it clearly hit the scoreboard first, but there's no replay since it's not a question of whether or not it's a HR, so the Nats get kind-of-robbed. 4-4 after five innings in Nats Park, and Chien-Ming Wang throws a quick seven-pitch 1-2-3 6th, leaving the right-hander at 80 pitches, 53 strikes with 7 hits and 4 runs allowed, 3 K's, ten groundouts collected and 10 of the last 11 batters he faces retired when Laynce Nix hits for him in a scoreless bottom of the sixth. Still 4-4 in Nats Park.

1. Jansen Pwns Nats: After Todd Coffey retires the Dodgers in order in the top of the seventh, Dodgers' right-hander Kenley Jansen continues to dominate the Nats, setting Lombardozzi, Zimmerman and Morse down in order in a quick 1-2-3 frame. Still 4-4 and the Nationals are still hitless against the 23-year-old 6'5'', 255 lb catcher-turned-pitcher, against whom Washington hitters are now a combined 0 for 15 with 1 walk and 12 K's in 18 plate appearances. Tyler Clippard and Mike MacDougal throw scoreless frames for their respective teams in the eighth, and the Nats bring Drew Storen on in the top of the ninth...

0. Non-Save Situation: Drew Storen's pitched just three times since August 22nd, and the rust shows in the 9th. The right-hander hits Jerry Sands with one out and gives up a line drive to left by Rod Barajas that puts two on with one out. Storen throws a 95 mph full-count fastball by pinch hitter Trent Oeltjen for out no. 2, but another 95mph heater on the first pitch of the next at bat against Tony Gwynn, Jr. ends up soaring over Jayson Werth's head in center for a two-run double and a 6-4 Dodgers' lead. Gwynn steals third and scores on Dee Gordon's fourth hit in five at bats. 7-4 Dodgers. And that's how it ends after Javy Guerra throws a scoreless bottom of the ninth. 7-4 final.

• Doghouse's Post Game WPA Graph: "Game 141: Not even six beers could save this game.": 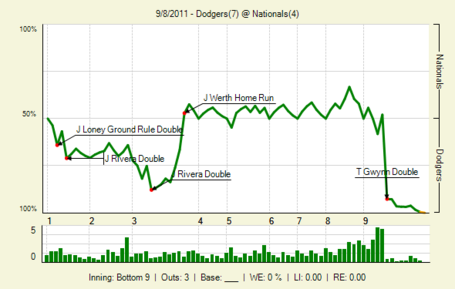