NLDS Game 5 WPA: Stare out the window and wait for spring; Cardinals 9, Nats 7

This was still the best season yet.

Share All sharing options for: NLDS Game 5 WPA: Stare out the window and wait for spring; Cardinals 9, Nats 7 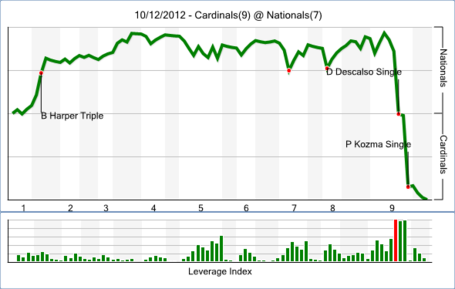 Yeah, so I was going to grab a bunch of strikezone maps off of Brooks Baseball to illustrate just how outrageously we wuz robbed, but it'll be all over teh interwebs tomorrow whether I do not, and I'm trying to focus on how this was AN OUTRAGEOUSLY GOOD, TOTALLY UNEXPECTEDLY AWESOME SEASON. And next season will be even better. Is it Spring yet?