The Washington Nationals decided to give Gio Gonzalez the night off after clinching the NL East crown last night and they're throwing Tom Gorzelanny against the Philadelphia Phillies instead.

The Washington Nationals are aware that there are still games to play this season, two more on the regular season schedule and then however many postseason games follow, but after clinching the NL East crown last night, the Nats decided to give left-hander Gio Gonzalez the night off. In the midst of the celebrations in Nationals Park last night as the Nats lost the game to the Phillies but won the division, Washington's 27-year-old Cy Young Award candidate said he would enjoy the moment, but knew it was right back to work after the celebration.

"I've got until tomorrow," Gonzalez said, "I've got to go out there and try to pitch tomorrow. I've ran my battery dry and I'm ready to recharge and get ready for tomorrow." Late last night, however, after the division was locked up, the Nationals scratched their lefty from tonight's outing in favor of long man Tom Gorzelanny so that they could rest Gonzalez in preparation for the first postseason game. If the Nationals end up first in the NL (the Nats and Reds are tied going into play today), the Nationals will open up the postseason at the home of the Wild Card winner on Sunday and Monday. If they finish behind Cincinnati it will be on the mound Saturday and Sunday in San Francisco. Regardless of where they play, Johnson told reporters today that it will be Gio Gonzalez and Jordan Zimmermann in the first two games of the postseason. The third starter, the Nats' manager said, will depend on who the Nationals end up playing.

Asked this afternoon about the decision to let Gonzalez rest up for the first postseason game, instead of allowing him to make a shorter-than-usual start tonight as had been planned, Johnson said it was a suggestion from Steve McCatty. "That was brought up to me by the pitching coach," Johnson said, "And that was a consideration that... since we could play Saturday [throwing Gonzalez tonight] ended up not being a consideration. McCatty felt like Gio would be better served [by] just throwing on flat ground."

When Davey Johnson shared tonight's lineup, which features exactly two regulars starters, the Nats' skipper was asked if that was a statement about the team's desire to beat the Reds out and finish no.1 overall in the NL. Johnson said it was more about rewarding his team. "I'm rewarding the guys that have been grinding through a tough schedule," the manager explained, so that everyone else could, "... sit back, gather your thoughts and get back out tomorrow. And go from there."

"Listen, I have all the confidence in the world in the guys I've got out there," the 69-year-old manager said, noting that just about every guy has been playing regularly outside of Mark DeRosa, who's battled injuries all season. 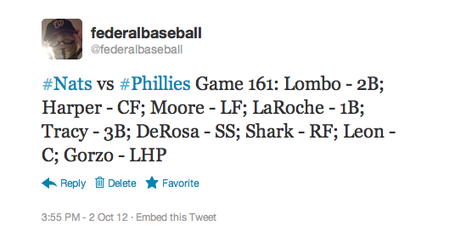