The Washington Nationals overcame a rough outing by Nats' starter Gio Gonzalez and stayed close until Tyler Moore's two-out, two-run single in the eighth put them ahead 3-2 on the St. Louis Cardinals. Nationals win the first game of the NLDS.

Share All sharing options for: Washington Nationals Win 3-2 Over St. Louis Cardinals On Tyler Moore's Two-Run Single In The Eighth

• 79 years to the Day: On October 7, 1933 in Washington's Griffith Stadium, the last postseason game played by a D.C.-based team before today took place in the old ballpark once located between Georgia Avenue and 5th Street, and between W Street and Florida Avenue, NW in the nation's capital. Seventy-nine years after the Senators lost the fifth game of the '33 World Series and lost four games to one to the 1933 World Champion New York Giants, the Washington Nationals started the first game of the 2012 NLDS on the road in Busch Stadium this afternoon where they faced the 2011 World Series Champion St. Louis Cardinals.

The Nats wore their road red jerseys, gray pants and red-billed away navy blue caps with the curly-W logo. The Cards wore the home whites and dark blue caps with Cardinal red bills and red bird on a bat logo on the front.

After Cardinals right-hander Adam Wainwright threw a 10-pitch, 1-2-3 inning against Washington in the top of the first, Nats' starter Gio Gonzalez's first career postseason outing began with the 27-year-old left-hander throwing a 91 mph 1-2 fastball by Cardinals' leadoff man Jon Jay for a called strike three. The Nats' 21-game winner got a groundout to second by Carlos Beltran for out no.2, but got behind and walked/pitched around Cards' slugger Matt Holliday before a fly to center off Allen Craig's bat was caught by Bryce Harper bringing an end of an 18-pitch bottom of the frame.

• ZUK!!!: Adam Wainwright was throwing a curve that looked like it kept hitting a bird on the way home in the top of the second as he struck Michael Morse out for his third K in 1.1 IP, but only after he'd issued his first walk to Nationals' leadoff man Adam LaRoche. The "speedy" LaRoche went first to third™ on an Ian Desmond single to center on a 91 mph 0-1 sinker from the Cards' starter, but Wainwright got Danny Espinosa looking with a 1-2 sinker that fell in under Espi's arms for a called strike, leaving it all up to Kurt Suzuki, the Nats' catcher acquired in an August 3rd deal with Oakland, who came through with a two-out RBI single through short that gave Washington a 1-0 lead early in St. Louis. The Nationals loaded the bases when Wainwright walked the opposing pitcher with two down, but a Jayson Werth groundout ended a 23-pitch inning by the Cardinals' right-hander.

• Still A No-Hitter Though: Gio Gonzalez battled Yadier Molina in an eight-pitch at bat that ended with the Cards' catcher walking on the second free pass issued by the Nationals' left-hander. The third walk came one out later, after Bryce Harper caught a fly to center by David Freese, when Gonzalez went to a full count and put Daniel Descalso on in front of "Pesky" Pete Kozma, the Cards' '07 1st Round pick who has posted a .333/.383/.569 line since being called up to St. Louis on August 31st. The Nats' starter went to a full count with Kozma and got the Cards' fans waving towels as he walked the infielder to load the bases with one out and the opposing pitcher up...

Gonzalez started Wainwright with a ball, throwing one outside the zone to the ninth-straight batter to start the game. Gonzalez went down 2-0 to Wainwright, but got to 2-2 before uncorking a wild pitch that Kurt Suzuki had no hope of corralling. Molina scored from third to tie it, and Gonzalez proceeded to walk the fourth batter of the inning when he put the Cards' pitcher on. Jon Jay hit a sac fly to left to bring Descalso in for a 2-1 Cards' lead. Gonzalez threw 37-pitches in the inning before he got out of the bottom of the frame at 55 pitches total after two in Busch Stadium.

• Gio's Pitch Count Climbs: A 2-2 curve got Wainwright his 5th K in 2.1 IP when Bryce Harper went down swinging on the seventh pitch of the top of the third. Ryan Zimmerman lined a 3-1 sinker to center for the Nationals' third hit, but Adam LaRoche popped out to center and Michael Morse grounded to short to end a 14-pitch inning that had Wainwright at 47 after 3.0 IP. Ryan Zimmerman fielded a grounder to third by Matt Holliday and made an on-target overhand throw to first to get the Cards' outfielder for out no.1 of the third. Gio Gonzalez got Allen Craig to chase a 2-2 change that dove under Craig's bat for a swinging strike strike three and a pop to second on a 3-0 pitch to Yadier Molina ended a 16-pitch 3rd after which the Nats' lefty was at 71 pitches.

• Desmond's Hitting At Least: Ian Desmond was 2 for 2 today when he lined another 0-1 sinker to center for a leadoff single to start the fourth, but Adam Wainwright got Danny Espinosa swinging (after Espinos K'd looking in his first at bat) and got a force at second on a grounder to third by Kurt Suzuki before he struck Gio Gonzalez out for 7 Ks in 4.0 IP after which he was still ahead, 2-1 on the Nats. The 15-pitch frame had Wainwright at 62 after four. David Freese connected on a 92 mph two-seamer and sent a leadoff single through short to start the Cards' fourth with the first hit off Gio Gonzalez. A 1-2 fastball to Daniel Descalso got Gonzalez a swinging K and out no.2 and a first-pitch curve to Pete Kozma got a grounder to short and an inning-ending 6-4-3. 12-pitch inning for Gio Gonzalez. 83 after 4.0.

• 110 Total: Jayson Werth singled to left to start the fourth, then took second on a curve that bounced but got Bryce Harper swinging for K no.8 for Wainwright and out no.1 of the Nationals' fifth. A 76 mph 2-2 bender got Ryan Zimmerman swinging for K no. 9 and out no.2 and Adam LaRoche grounded weakly to first to end a 20-pitch inning by the Cardinals' starter that had him at 82 pitches after 5.0 IP. Gio Gonzalez started the 5th at 83. Jon Jay took the sixth walk of the game with one down in the Cards' fifth, at which point Christian Garcia began to warm up in the Nationals' pen. After Carlos Beltran walked, taking the seventh free pass of the game from Gonzalez, the Nats' left-hander was up to 100 pitches even. Matt Holliday stepped in with two on, but K'd swinging on a 3-2 curve with both runners going and safe as Gonzalez recorded out no.2. Allen Craig's pop to first ended a 27-pitch inning with Gonzalez at 110 pitches overall.

• Werth w/ The Bases Loaded Pt.2: Michael Morse singled to right to start the sixth with the Nats' third-straight leadoff hit, but two outs later he was still standing on first after Ian Desmond popped out and Danny Espinosa struck out for outs 1 and 2 and Wainwright's 10th K. Kurt Suzuki battled for eight pitches and walked with two down, ending the night for both pitchers. Wainwright left with two on and two out. Gio Gonzalez left for a pinch hitter, Roger Bernadina. The so-called Shark took a two-out walk from Cards' right-hander Lance Lynn to bring Jayson Werth up with the bases loaded again, but the Nats' outfielder K'd swinging at an 0-2 curve and the Nats trailed 2-1 after five and a half.

Wainwright first Cardinal with a double-digit K game in a postseason game since Bob Gibson, Game 4, 1968 WS. Right. Heard of him!

Adam Wainwright is 1st pitcher with 10+ strikeouts in less than 6 IP in a postseason game.

• Good Stammen: Craig Stammen took over for the Nats in the bottom of the sixth and gave up a one-out single to left by Cards' 3B David Freese, who had St. Louis' only two hits after he sent a 1-2 two-seamer to left. Daniel Descalso flew to deep right on an 0-1 slider only to have Jayson Werth make a leaping attempt at the wall and bring it down for out no.2. A HBP on Pete Kozma put two runners on, but Stammen got pinch hitter Skip Schumaker swinging to end the sixth. Still 2-1 St. Louis.

• FIREWORKS!!!!: Grounders to second and short by Bryce Harper and Ryan Zimmerman, respectively, got Cards' reliever Edward Mujica the first two outs of the seventh. A groundout to first by Adam LaRoche ended a six-pitch top of the inning by the Cardinals' right-hander. Craig Stammen loaded the bases with no one out in the Cards' seventh when he hit Matt Holliday after Adam LaRoche committed an error on a grounder to first by Jon Jay and Carlos Beltran singled his way on. Ryan Mattheus took over for Stammen and got a force at home on a grounder to short by Allen Craig and a 5-4-3 inning-ending DP out of Yadier Molina to end the seventh. Still 2-1 St. Louis.

• MOAR MOORE!!: Pete Kozma misplayed a sharp grounder to short by Michael Morse that bounced off the Cards' shortstop's glove. Ian Desmond's third hit of the game sent Morse from first-to-third™. Danny Espinosa bunted Desmond over/gave up an out to put two runners on in front of Kurt Suzuki, who drove in the only Nats' run of the game in the second. Suzuki K'd swinging for out no.2. The Cards went to the pen for Marc Rzepczynski to face Nats' slugger Tyler Moore, who singled to right on a 93 mph 2-2 fastball to bring two runs in with an opposite field hit and make it 3-2 Nationals after seven and a half in St. Louis.

• Ready or Not: Tyler Clippard got a grounder to third by David Freese only to have Ryan Zimmerman bounce a throw to first that Adam LaRoche couldn't pick. E:5. Daniel Descalso bunted pinch runner Adron Chambers over to second/gave up an out. Pete Kozma popped out to first for out no.2. Matt Carpenter K'd looking and didn't like it. 3-2 Nats after eight.

• DRUUUUU!!!!: Cards' right-hander Jason Motte retired the Nats in order in the top of the ninth. Nats' closer Drew Storen came on in the bottom of the ninth, looking for postseason save no.1 of the '09 1st Round pick's major league career. Jon Jay flew to left... ONE!!!! Carlos Beltran flew to Harper in center. TWO!!!! Matt Holliday took a front door slider for a called strike one. A fastball at the knees for a called strike two. And K'd swinging on a check-swing strike three!!! Ballgame. Nats win, 3-2 final.

• Doghouse's Post Game WPA Graph: "NLDS Game 1 WPA: Does the team with the most LOB win in the postseason? Nationals 3, Cardinals 2": 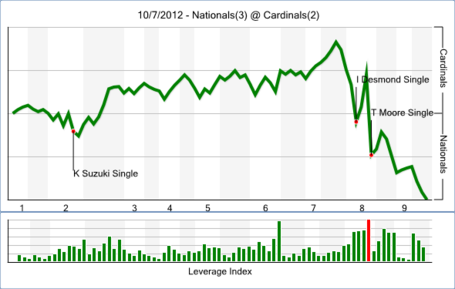 Nationals lead Cardinals 1-0 in the NLDS