St. Louis Cardinals Even NLDS Up At 1-1 With 12-4 Win Over Washington Nationals

Both starting pitchers were out early, but the St. Louis Cardinals got out to a big lead, held on and evened the NLDS series up at 1-1 with an 12-4 win over the Washington Nationals in Busch Stadium.

Share All sharing options for: St. Louis Cardinals Even NLDS Up At 1-1 With 12-4 Win Over Washington Nationals

ST. LOUIS - Jordan Zimmermann told reporters on Sunday that he didn't really get nervous before his starts, and hadn't really since he made his MLB debut. Adam LaRoche, one of a few Nats who has played in the postseason before Game One yesterday, was asked this afternoon how he thought the Washington Nationals' Game Two starter would handle the pressure of the playoff atmosphere in St. Louis and if he thought it might get to the 26-year-old right-hander? "I don't think so," LaRoche told reporters, "And knowing Jordan and knowing kind of his demeanor and the way he goes about his business and the way he pitches, I don't think this will affect him. Obviously time will tell on that. He's got it together out there. It's something about him. He's not scared of anybody, I think we all know that, he's going right after everybody and I don't think the game or the situation is going to change his mentality."

In his first postseason start this afternoon, the Nationals' 07 2nd Round pick went right at the Cards, but wasn't sharp and he lasted just three innings in which he gave up seven hits and five runs, all earned in the Washington Nationals' 12-4 loss in Game Two of the NLDS.

• Garcia vs Zimmermann: St. Louis Cardinals' lefty Jaime Garcia walked Jayson Werth in a seven-pitch game-opening AB, but two outs later the Nats' center fielder was standing on second after taking a base on a Ryan Zimmerman groundout. Adam LaRoche worked the count full, taking a close 2-2 slider outside that broke across the plate and "holding up" on the 3-2 pitch to draw a two-out walk in front of Michael Morse. Morse's groundout to second ended a 24-pitch top of the first by the Cards' 26-year-old, 4-year veteran, however, and the Nationals' 26-year-old, fourth-year starter, Jordan Zimmermann, took the mound in his first postseason start. Zimmermann got Jon Jay looking with a 95 mph 0-2 fastball. A 2-2 heater got a groundout to second from Carlos Beltran. A one-hop grounder right at Danny Espinosa off Matt Holliday's bat ended a 13-pitch, 1-2-3 frame. 0-0 after one in Busch Stadium.

• DIY: Ian Desmond's fourth postseason hit was a single through short to start the Nationals' second. The third walk of the game issued by Jamie Garcia went to Danny Espinosa, putting two on in front of Nats' catcher Kurt "If Clutch Existed" Suzuki, who K'd swinging for the first out of the inning. Jordan Zimmermann squared to bunt in the next at bat, but pulled back and sent an opposite field single to right to drive Ian Desmond in and give himself and the Nats a 1-0 lead. Third base coach Bo Porter tried to hold Desmond up, but the Nats' shortstop took advantage of some hesitation to throw it in on Carlos Beltran's part and scored, sliding headfirst by Cards' catcher Yadier Molina for the early lead. By the time Jaime Garcia got Bryce Harper swinging to end the inning he had thrown 27 pitches in the second and was at 51 overall after two.

• Back-To-Back-To-Back-To-Back...: Ryan Zimmerman knocked down a scorched grounder to third on his backhand side, but couldn't field it as Allen Craig reached on an infield single to start the Cards' second. Craig was running when Yadier Molina lined to center in the next at bat and the Cards' first baseman read it right and took third to put runners on the corners with no outs. David Freese, who was 2 for 2 with a double and a home run against Jordan Zimmermann coming into the game, was 3 for 3 with two doubles after he lined to right over Jayson Werth's head to bring Craig around. Molina made it to third and then scored on the fourth straight hit, an RBI single by Daniel Descalso that made it 2-1 Cards. Zimmermann struck Pete Kozma out with a 1-2 slider, at which point St. Louis' manager Mike Matheny pulled his starter, going with pinch hitter Skip Schumaker when Garcia's spot came around. A run scored on a sharp grounder to short by Schumaker that Ian Desmond somehow managed to play, diving for it, popping up and throwing to first in time for out no.2. 3-1 Cards. Daniel Descalso scored on an RBI single by Jon Jay, but Jay slid by second and was tagged out by Ian Desmond to end a 29 pitch 2nd after which Zimmermann was at 42 pitches overall.

• Storen's Boy: Brownsburg, Indiana-raise right-hander Lance Lynn struck Ryan Zimmerman out with a 1-2 bender that got the Nationals' three-hole hitter looking and got out no. 2 when Adam LaRoche grounded to short on an 0-2 four-seamer that came in at 95, but Michael Morse slowed the Cards' starter down with a two-out single through short. Lynn struck Ian Desmond out with a 96 mph 2-2 fastball to end a 16-pitch 3rd. Jordan Zimmermann retired the first two batters he faced in the third, but a 1-1 fastball to Allen Craig was crushed. Solo HR to left and just fair. 5-1 Cardinals over the Nats. Zimmermann threw 21 pitches before a diving play by Ryan Zimmerman on a David Freese grounder ended the Cards' third. 5-1 St. Louis after three in Busch Stadium.

• 3.0 And Out: Roger Bernadina pinch hit for Jordan Zimmermann after 3.0 innings on the mound in his first postseason appearance. Zimmermann's line: 3.0 IP, 7 H, 5 R, 5 ER, 0 BB, 2 Ks, 1 HR, 63 P, 40 S, 5/1 GO/FO. Bernadina walked, but Lance Lynn threw a high fastball by Jayson Werth to end the Cards' starter's second scoreless innning of work in relief. Daniel Descalso took Craig Stammen deep in the first at bat of the Cardinals' fourth, crushing a 1-1 fastball and sending a home run out to right and over the wall. 6-1 St. Louis. Stammen walked the second batter he faced, putting Pete Kozma on. Kozma took second on a bunt by Lance Lynn, and kept going around to third when Stammen took it easy on the play at first. Kozma hen scored when Danny Espinosa booted a grounder to second by Jon Jay. 7-1 St. Louis. Christian Garcia came on and got two outs to stop the bleeding there, but the Nats' trailed by six after four.

Zimmerman 2.38 ERA against teams other than STL this season. 11.08 ERA in 3 starts against Cards.

• TKCHZ!!!: Lance Lynn retired the first two batters in the Nationals' fifth, but Ryan Zimmerma-- THE KIDS CALL HIM ZIM!! THE KIDS CALL HIM ZIM!!! Nats' third baseman Ryan Zimmerman hit the first postseason HR in Nationals' history out to left-center and into the Cardinals' bullpen to make it 7-2 and Adam LaRoche followed with the second of back-to-back blasts, taking Lance Lynn deep to right to make it 7-3. Morse and Desmond flew out to the track in consecutive at bats, but the Nats were all-of-a-sudden back in it. Christian Garcia walked the first two batters in the Cards' fifth, but got a 6-4-3 DP out of Daniel Descalso before striking Pete Kozma out to end the fifth.

• Espinosa Gets Robbed: Jon Jay ran a long way and ran full-steam into the center field wall to take an extra base hit away from Danny Espinosa for the first out of the sixth on a spectacular play. A groundout to short by Kurt Suzuki got Cards' reliever Joe Kelly the second out of the frame. Steve Lombardozzi lined to left to end the Nats' sixth. Michael Gonzalez retired the first two batters he faced in the bottom of the sixth, but he gave up a bomb of a HR by Carlos Beltran with two down that bounced off the facade of the third deck in left to make it 8-3 Cardinals after six in St. Louis.

• Trying Too Hard: Jayson Werth started the seventh with a single to center then went around to third as Bryce Harper hustled out of the box on a grounder up the middle and turned it into a hustle double. Harper's first postseason hit put two on in front of Ryan Zimmerman, whose sac fly to left was deep enough to score Werth, but Harper got thrown out trying to take third when the throw back in got away from the Cards and Adam LaRoche's pop to foul territory in right ended the top of the seventh. 8-4 Cardinals. Ryan Mattheus needed 12 pitches to retire the Cardinals in order in the bottom of the seventh.

• Comeback Attempt No.3: Michael Morse singled to right off Mitchell Boggs to start the Nats' eighth. Ian Desmond battled for seven pitches before flying out to right. Danny Espinosa singled over the outstretched glove of Daniel Descalso and into right, but a fly to right by Kurt Suzuki and an infield pop by Chad Tracy ended the top of the inning with the Cardinals still ahead by four. Pete Kozma lined to left with one down in the Cards' eighth and took second when Morse trapped and lost track of the ball. Matt Carpenter K'd looking, but Jon Jay came through with an RBI triple to right that made it 9-4 Cardinals. Jay scored too when Carlos Beltran hit his second home run of the game, crushing a 2-2 sinker from Burnett and hitting a two-run home run to left-center that made it 11-4 St. Louis. Matt Holliday walked to end Sean Burnett's night, then scored on a double to left by Allen Craig. 12-4. 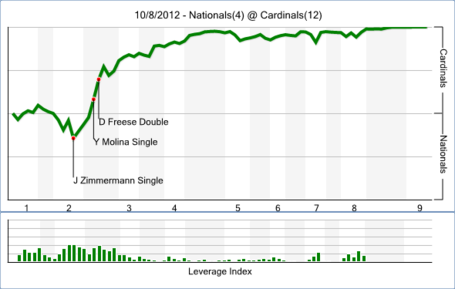 Nationals and Cardinals tied 1-1 in the NLDS.