Washington Nationals; Top 5 Of 2012 Lists; Movies, Music And Other Things Not Related To Adam LaRoche Non-Updates

The year in music, movies and most importantly Washington Nationals-related quotes, videos, curveballs, and more. Federal Baseball takes a look back at the year that was covering the 2012 NL East Champions.

Share All sharing options for: Washington Nationals; Top 5 Of 2012 Lists; Movies, Music And Other Things Not Related To Adam LaRoche Non-Updates

Top 5's: I've only done this once before, last January 1st and I apologize in advance for doing it again, especially when it comes to the music that's on My Top 5 Albums of 2012. We already did our Top 5 Storylines of 2012. So what else is there to do at this list-filled stage of the offseason... But who doesn't like a post full of arbitrary rankings of things? Put your hand down. Year-end best-of lists are great! How about the Top 5 Movies we watched when we weren't watching baseball this year? (Though I still haven't seen the controversial Zero Dark Thirty). The Top 5 things we listened to this year when we were writing about the Nats? The Top 5 Davey Johnson Quotes? Top 5 Top 5 Lists Of 2012? You asked for it... OK, I admit you didn't ask for it. But you're getting it. Top 5 Lists And Lots Of Them...

5. Life of Pi - Directed by Ang Lee - There was no way I was going to miss the director of "Crouching Tiger, Hidden Dragon" and the underrated (techically/visually at least, though I hated the poodle) "Hulk" making his first 3-D movie. Ang Lee, with help from James (Titanic) Cameron's 3-D production company, creates a mesmerizing adaptation of Yann Martel's novel about a boy trapped on a lifeboat for 227 days with a bengal tiger named Richard Parker. Bonus points for the best use of electric jelly fish since The Life Aquatic with Steve Zissou. (ed. note - "What? They're not electric jelly-fish?")

4. Moonrise Kingdom - Directed by Wes Anderson - Speaking of Wes Anderson, the director of The Life Aquatic, Bottle Rocket, Rushmore, The Royal Tenenbaums, The Darjeeling Limited and The Fantastic Mr. Fox returned this year with Moonrise Kindgom. The plot? Sam and Suzy, two 12-year-olds in 1965 New England, meet, fall in love, run away together and set up a new home for themselves on a remote beach on the island of New Penzance. Edward Norton's Scout Master Ward tells Sam after the two have finally been [SPOILER ALERT] "rescued" that it's one of the best-pitched camp sites he's ever seen.

3. Lincoln - Directed by Steven Spielberg - Bill "The Butcher" Cutting. Daniel Plainview. Now Abraham Lincoln? Even if it wasn't directed by Steven Spielberg and written by Tony Kushner, the return to the screen of Daniel Day-Lewis is worth the price of admission. Buzzard's guts, man. This was one enjoyable, dialogue-driven examination of the passing of the 13th Amendment to the Constitution.

2. Silver Linings Playbook - Directed by David O. Russell - As someone who is, well, obsessed is a nice way of putting it, with the movie I Heart Huckabees and has seen all of its director's films, the return of David O. Russell was the second most exciting thing in theaters this year. That he returned with a well-written and acted love story/romantic comedy that deals seriously with bipolar issues, dysfunctional families and the at-times disturbing actions of its characters and somehow makes it all work shouldn't have been a surprise.

1. The Master - Directed by Paul Thomas Anderson - I'm still not sure whether it was Philip Seymour Hoffman's Lancaster Dodd seducing Joaquin Phoenix's Freddie Quell with the promise of answers to a lifetime of problems through his philosophical movement called "The Cause" (reportedly based on L. Ron Hubbard/Scientology) or the other way around with Mr. Quell's home-made intoxicants luring Mr. Dodd into unwittingly helping a veteran of World War II dealing with post-traumatic stress stay afloat in a world he can no longer seem to make sense of or deal with. In fact, at the end, I'm really not sure what I'd just watched, but it was enthralling. 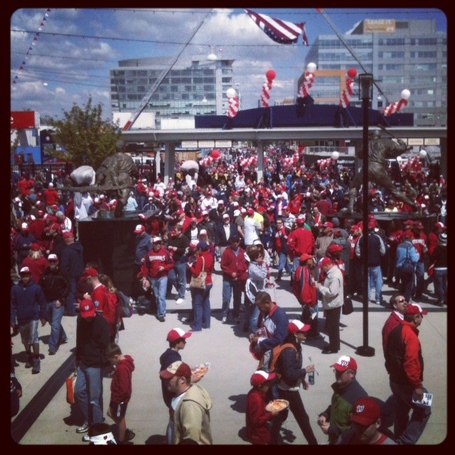 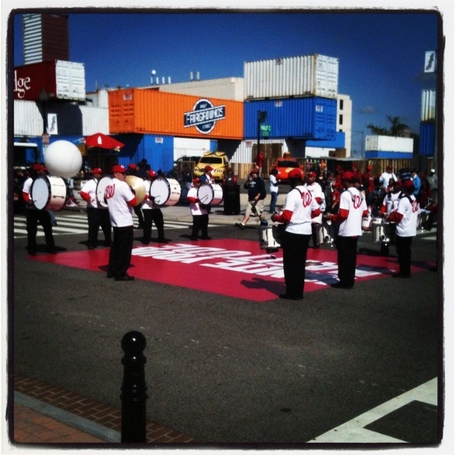 3. CF Gate From Red Loft Before Game 3 of the NLDS: 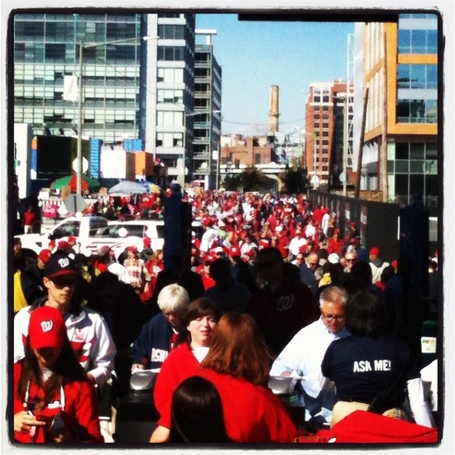 2. Center Field Gate Before Game 5 of the NLDS: 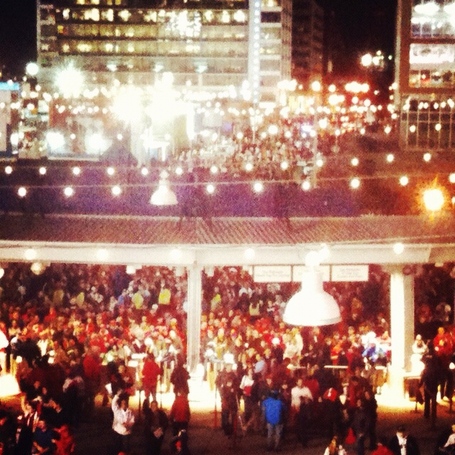 1. TIE: I Cheated, These are GIFs of Strasburg making the Braves' Martin Prado flinch with a curve and then another of Stras buckling Hunter Pence's knees (with a cinematic city scape intro):

3. "Davey on Maddon: 'I don't know him that well, but I thought he was a weird wuss anyways.'" - via @MarkZuckerman on Twitter.

2. "'I can’t really tell you what the problem was, but some Hot Stuff got misplaced," - Davey Johnson to the Washington Post on Strasburg having "Hot Stuff" issues on the mound.

• Top 5 Albums Of 2012: (Warning, some NSFW material below and some not-safe-for-ears sounds, as it was a big year for noisy pop music in the offices at FBb and in the car as we drove to D.C. and back to N.J. repeatedly all summer.)

5. Mouse On Mars - Parastrophics - Dusseldorf, Germany-based purveyors of what they describe as, "... a unique blend of sound annihilation, fragmented melodies and an impassioned hatred of conformity," return with their 10th studio album of ever-evolving electronic music that's best described as meticulously crafted and produced noise/pop.

4. Liars - WIXIW - The members of Liars, an LA-based trio (via Brooklyn, NY and for a time Berlin), retreated to a remote cabin in California to write their sixth studio album which features synth-heavy, introverted, introspective electronic pop with disjointed, meandering song structures and trance-like rhythms... uh, yeah, it's an odd pop record. Sample Track: Brats live via pitchfork tv on Youtube.

3. Fiona Apple - The Idler Wheel Is Wiser Than the Driver of the Screw and Whipping Cords Will Serve You More Than Ropes Will Ever Do - If you don't like Fiona Apple, well, that's your problem. This one's a stripped down mix of piano and vocals with percussive elements provided by drummer Charley Drayton, but the draw here is Apple's voice, phrasing and song writing. Sample Track: Every Single Night (official video)

2. Of Montreal - Paralytic Stalks - Of Montreal's chief architect and songwriter Kevin Barnes described the band's 11th studio album, "Paralytic Stalks," as a document of the dark state he was in when he recorded the nine shape-shifting, angry, aggressive, constantly-evolving, string-heavy, horn-filled, orchestral noise pop songs. "I spend my waking hours, haunting my own life, I made the one I love start crying tonight. And it felt good." - lyrics from Sample Track: Spiteful Intervention (NSFW) Official video.

1. The Brian Jonestown Massacre - Aufheben - The mastermind behind the 13 albums recorded by the ever-changing lineups and personnel of the Brian Jonestown Massacre, Anton Newcombe, recorded "Aufheben" in Berlin, Germany adding Middle Eastern rhythms and percussion to the droning, exquisitely produced, psychedelic 60's pop he and his band have been mining and producing since he released the BJTM's first album in 1995.

"Bryce Harper's Faux-Hawk = Awesome: The Washington Nationals' 19-year-old 2010 no.1 overall pick Bryce Harper's first at bat in the majors took place in the top of the second inning in front of 54,242 fans in Dodger Stadium against LA Dodgers' right-hander Chad Billingsley."

4. John Lannan Beats Braves: Game Story: 7/21/12 - With the Braves within 2.5 games of first following wins in the first two games of a four-game set in the nation's capital, the Nationals turn to veteran lefty John Lannan, who'd been sent to Triple-A Syracuse to start the season and the Nats' starter gives Washington 7.0 innings in which he allows 5 H, 2 R, 2 ER, 2 BB, 3 K's, 2 HBP and throws 98 pitches, 65 for strikes in start no.1 of 2012. The Nationals beat the Braves that day and the next to split the series and give themselves a 3.5 game lead when the Braves had been threatening.

2. Nats Wait Out Rain Delay Rally To Beat Marlins: 9/8/12 - Game Story: Heath Bell came out to close it out for the Marlins... when a violent storm hit Nats Park. Rain Delay...Over two hours later, [2:33 to be exact] they retook the field to play the bottom of the ninth. Jayson Werth vs Heath Bell. Full count... and WERTH GOES YARD!! Into the Red Porch Seats and two and a half hours later it's a tie game 6-6 in the ninth. Werth's 5th HR of the year. Bryce Harper K'd swinging for out no.1. Zim K'd swinging for out no.2. Tyler Moore K'd swinging. On to the tenth...

1. Werth-Quake: Happy New Year, everyone. No better way to end the year than watching this at bat again...

Happy New Year, and thanks to everyone for another great year talking and covering the Nats. - Patrick.