New York Mets' right-hander Dillon Gee threw 7.2 scoreless in a May 19, 2011 game against the Washington Nationals in what ended up being a 1-0 Mets' win. New York's 25-year-old '07 21st Round pick had a no-hitter through 6.2 IP that day before former Nats' starter Livan Hernandez broke it up with a two-out single. The start continued a stretch of dominance for Gee against the Nats which stretched back to the Mets' starter's major league debut the previous September when he had a no-hitter against Washington through five before Willie Harris broke it up in a big way with a leadoff home run in the bottom of the sixth. The Nationals fared better against Gee in the other three outings in which they faced the Mets' starter last year, but they still haven't beaten him. Gee entered tonight's game (3-0) in five starts against the Nats, but he was down 1-0 early after Ian Desmond crushed a 2-0 fastball for a leadoff solo blast to left and the Nationals' shortstop's first home run of 2012.

Mets' leadoff man Ruben Tejada almost tied things up with one swing in the Mets' first, doubling off the left field wall on a full-count fastball from Nats' lefty Ross Detwiler, who gave up a single by Mets' 3B Ronny Cedeno too before striking Daniel Murphy out, popping Jason Bay up and throwing a 91 mph 1-2 fastball by right fielder Lucas Duda to end a 24-pitch bottom of the first. The Nationals had a runner on first and third with one down after a Jayson Werth double and a one-out single by Roger Bernadina in the Nats' second, but Wilson Ramos grounded into an inning-ending 1-6-3 DP to close out the top of the frame. Detwiler issued a two-out walk to Mets' catcher Mike Nickeas in the bottom of the inning, but got Dillon Gee to ground out to short and got help from Ian Desmond who made backhand play and a strong throw from deep in the hole to first in time to get the opposing pitcher and end a 15-pitch second.

A 1-2 curve got Ross Detwiler a called strike three in his second at bat against Ruben Tejada in the bottom of the third. After a groundout to short that Ian Desmond bobbled before making a strong throw to first, Detwiler went with the slider, dropping one in for another called strike three on an 0-2 pitch to Daniel Murphy that ended an 11-pitch frame. Detwiler was back on the mound quickly after Dillon Gee K'd two in a 12-pitch 1-2-3 fourth. The Nats' lefty got up 0-2 on Jason Bay, and on the seventh of the first 13 batters he faced tonight according to SNY's announcers, and threw a 90 mph fastball inside for a called strike three and K no. 5 on the night. K no. 6 came in the next at bat on a 95 mph 1-2 fastball to Justin Turner for out no.3 in a 12-pitch fourth that left Detwiler at 63 pitches total, 43 strikes after 4.0 scoreless IP.

Detwiler threw an eight-pitch 1-2-3 fifth, retiring Scott Hairston, Mike Nickeas and the opposing pitcher in order and setting down the 10th straight batter going back to Nickeas' two-out walk in the second. 15 of 16 batters retired overall by Detwiler after the two hits that started the Mets' first. 71 pitches, 50 strikes through 5.0 scoreless in Citi Field. Ryan Zimmerman started the sixth with a line drive double to left on a 3-1 fastball from Gee, and the Nats' third baseman scored from second one out later on an RBI single through the right side by Jayson Werth. Xavier Nady's single in the next at bat ended Gee's night after 5.1 IP, 8 H, 2 R, 2 ER, 1 BB, 6 K's, 1 HR, 104 P, 69 strikes...

Roger Bernadina grounded to second in the next at bat against Gee's replacement, Bobby Parnell, for what should have been an inning-ending DP, but Daniel Murphy booted it, allowing a run to score, and another run came in when Wilson Ramos doubled to right to make it 4-0 Nats after five and a half. Chad Tracy hit for Detwiler in the top of the sixth, ending the left-hander's first outing of 2012 after 5.0 scoreless in which he gave up two hits and one walk while striking out six on 71 pitches, 50 of them strikes. The 5.0 scoreless innings give Detwiler a streak of 18.1 scoreless going back to last September's back-to-back scoreless outings against the Phillies (7.1 IP) and the Braves (6.0).

Ryan Zimmerman walked with one down in the seventh, took third on an opposite field double by Adam LaRoche and scored on an RBI single by Jayson Werth to make it 5-0 Nationals. Werth's hit left him 3 for 4 with 2 RBI's tonight, after the Nats' right fielder entered action today 1 for 14 with 7 K's so far this season. Craig Stammen, in his second inning of relief work, gave up a run on an RBI single by Justin Turner that scored Jason Bay from second after a leadoff double by the Mets' outfielder. Sean Burnett came on with two on and one out and retired the next two batters to preserve the four-run lead, 5-1 Nats after seven.

• #500!!!: Former Nats' reliever Miguel Batista loaded the bases with one down in the eighth to set Ryan Zimmerman up with an RBI opportunity which the Nats' 27-year-old first baseman cashed in with a sac fly to right for RBI no. 500 of the Nats' '05 1st Round pick's 8-year/850 game career. 6-1 Nationals after seven and a half. Tyler Clippard gave up a leadoff walk and an RBI double by Mets' infielder Ronny Cedeno to make it a 6-2 game, before he retired the next three batters in a 19-pitch, 12 strike eighth. Jayson Werth collected his fourth hit in five at bats tonight on a single to center off Miguel Batista in the 9th. Werth's first 4-hit game as a National (and according to the Washington Times' Amanda Comak and BB-Ref his first 4-hit game since June 27, 2009.) Brad Lidge gives up a hit, but throws a scoreless ninth and the Nats win, 6-2 final. 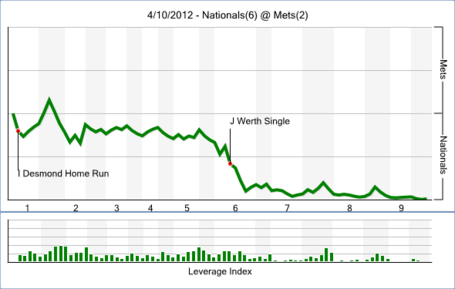