• Duel?: 27-year-old Nats' catcher Jesus Flores wrote on Twitter this morning that he was looking forward to the "gran duelo de pitchers" lined up for this afternoon's series finale in Citi Field. 23-year-old Washington Nationals' phenom Stephen Strasburg matched up against the New York Mets' 33-year-old, two-time Cy Young Award-winning left-hander Johan Santana in the rubber match of the three game set. The Mets' lefty labored in the first, but worked around a one-out walk and a two-out single with help from his catcher, Josh Thole, who caught Danny Espinosa trying to steal second as part of a double steal with Mark DeRosa at the plate. The caught stealing ended a long first for Santana, who threw 27 pitches, 15 of them strikes in a scoreless frame.

Nats' right-hander Stephen Strasburg had a word with the home plate ump after Ruben Tejada singled on a line drive to center in the first at bat of the Mets' half of the first. The Nats' starter wondered where the 2-2 fastball he threw to Tejada had missed, and umpire Larry Vanover was apparently not amused by the young starter's questions. A four-pitch walk to Daniel Murphy followed, and Strasburg started behind 2-0 to Lucas Duda before eventually getting a line drive to center for out no.1. An unhittable 3-1 change and a brutal full-count curve got Ike Davis looking for out no.2, though a wild pitch put runners on second and third, before a groundout to short by Jason Bay finally ended an erratic first for both starters. Strasburg finished the first at 26 pitches, just 10 of them strikes. 0-0 in City Field.

• 1 for 12: Mark DeRosa singled to center on a 2-1 fastball from Santana to start the Nats' second with the veteran utility man's first hit in 12 at bats this season. An Xavier Nady one-out single to right allowed DeRosa to go from first-to-third™ ahead of a throw in by Lucas Duda which allowed Nady to move into scoring position as well. A one-out walk to Jesus Flores loaded the bases, and a two-out wild pitch by Santana got by Mets' backstop Josh Thole allowing the first run of the game to score when DeRosa cruised in from third for a 1-0 Nats' lead. Santana's at 53 pitches and down a run when he gets out of a 26-pitch second.

Strasburg "missed" with a 2-2 curve to Mets' catcher Josh Thole, then "missed" with a 97 mph full-count fastball that the home plate ump called ball four for a leadoff walk to start the bottom of the second. Strasburg got angry, then got a called strike three with a 1-2 fastball to Kirk Nieuwenhuis, got Ronny Cedeno looking with a 2-2 curve and popped the opposing pitcher up to end a 19-pitch frame. 2.0 scoreless on 45 pitches for the Nats' right-hander. Johan Santana settled down in the third, getting Danny Espinosa looking, Zimmerman swinging and getting a fly to right from Jayson Werth to complete a quick, 1-2-3, 14-pitch frame. A weak groundout to second, a fly to left and a swinging K with an unhittable 0-2 change to Lucas Duda got Strasburg through a quick, 12-pitch, 1-2-3 3rd, leaving him at 57 pitches after 3.0 IP with 9 of the last 10 batters he's faced set down after the first two runners of the game reached base.

An 11-pitch, 1-2-3 4th by Johan Santana ended with the left-hander at 78 pitches, 44 of them strikes over 4.0 IP in which he'd struck out seven. Stephen Strasburg dropped a 2-2 curve on the Mets' Ike Davis and got a check-swing strike three from the Mets' 1B, who's 0 for 2 today, and 0 for 18 with 9 K's to start the 2012 season. A full count change got Jason Bay swinging and one pitch and one fly to left later, the Nats' right-hander was through a 13-pitch fourth, having retired nine straight following the leadoff walk to Thole in the second.

Ian Desmond broke up a streak of 10-straight batters retired by Johan Santana with a two-out single to left in the top of the fifth. Danny Espinosa followed with a single to center, but Ryan Zimmerman popped up to Ike Davis to end a 15-pitch frame by the Mets' left-hander. With one down in the Mets' fifth, Strasburg hit Ronny Cendeno with a 93 mph first-pitch fastball to put the first runner on since the leadoff walk in the second, but the right-hander got Johan Santana swinging with a 1-2 curve for his seventh K of the day, and dropped a 2-2 bender in for a called strike three on Ruben Tejada to end a 14-pitch frame. 84 pitches, 29 strikes, 8 K's through 5.0 scoreless by Strasburg, Nats still up 1-0.

Jayson Werth walked to start the Mets' 5th and chase Johan Santana, who was out after 5.0 IP, 5 H, 1 R, 1 ER, 3 BB, 8 K's and 99 pitches, 56 of them strikes. Mets' right-hander Manny Acosta threw a slider by the Mets' catcher Josh Thole on the first pitch he threw, allowing Werth to take second, and walked Mark DeRosa and Adam LaRoche to load the bases with no one out before Xavier Nady lined into a double play at second. Jesus Flores then flew out to center to waste a big opportunity for the Nats to add to their 1-0 lead. Strasburg walked Lucas Duda with one down in the Mets' 6th. The Nats' right-hander reached 100 pitches for the first time in his career with a 1-2 curve to Ike Davis, but the Mets' first baseman fouled it off and then lined a 1-2 change to right to put two on with no one out. 102 pitches for Strasburg 18 pitches into the sixth. A 95 mph 2-2 fastball outside gets Jason Bay looking and Strasburg pops Josh Thole up to end the inning, still 1-0 Nats after six.

Ian Desmond doubled to center off Manny Acosta with one down in the seventh, and a one-out walk to Danny Espinosa put two on with one out for Ryan Zimmerman. Mets' right-hander Ramon Ramirez took over on the mound and walked Zimmerman to load the bases for the second-straight inning, but Jayson Werth K'd swinging at a 1-2 slider, leaving the Nats 0 for 6 w/ RISP today, and leaving it up to Mark DeRosa to make something of the situation. DeRosa battled Mets' reliever Ramon Ramirez in a 10-pitch at bat and walked to force the second run of the game in. 2-0 Nationals after six and a half.

Ryan Mattheus walked the first batter he faced in the Mets' seventh, but got a force at second and two swinging K's to make the Nats' 2-0 lead hold up through seven. The Nationals added a run in the top of the eighth. An RBI groundout by Chad Tracy gave the Nats a 3-0 lead after Mets' reliever Ramon Ramirez gave up a back-to-back singles by Xavier Nady and Jesus Flores. Nady stole second with Flores up and took third on the Nats' catcher's single to center before Tracy's groundout brought him home. Sean Burnett gave up a leadoff single but nothing else in a scoreless eighth. The Nationals load the bases against Miguel Batista in the ninht, but Mets' lefty Tim Byrdak comes on and pops Adam LaRoche up for the first out of the frame, Xavier Nady K's, but Jesus Flores takes a bases-loaded, two-out walk to force in run no. 4, 4-0 Nats. Henry Rodriguez comes on in the ninth and retires the Mets in order. Nationals win, 4-0 final. 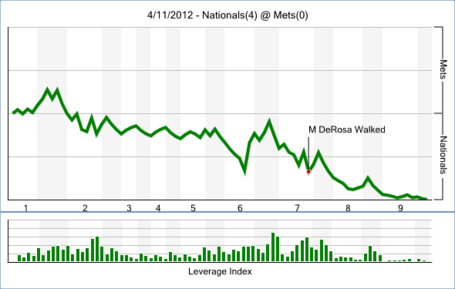