The huge American flag was unfurled over the outfield. There was a well-timed fly over by four F-16s above Nationals Park at the end of the anthem. There was bunting on the stands all around the ballpark, and more red, white and blue decorative bunting painted on the grass along each base line. But after all the ceremonial trappings of Opening Day in D.C. there was baseball, and the Washington Nationals and the visiting Cincinnati Reds opened Nationals Park for the year in front of a sellout nation's capital crowd of 40,907 with a low-scoring game that saw Nats' left-hander Gio Gonzalez wow the home crowd in his first start in D.C. following the December deal with Oakland that made the former A's starter a Nat.

Gonzalez was animated on the mound early, objecting to a call on a 2-2 curve he thought had earned him his first K from Reds' leadoff man Drew Stubbs, but the Nats' left-hander came back with a full-count fastball low in the zone that was called strike three for the first out of the year in Nationals Park. Gonzalez got a groundout to short from Reds' shortstop Zack Cozart and a swinging K from Cincinnati's three-hole hitter Joey Votto to end a 15-pitch, 1-2-3 first in his first inning of work in front of the D.C. faithful. Danny Espinosa worked an 11-pitch walk in the Nats' first, but Reds' right-hander Mat Latos needed just seven pitches to collect the other three outs and strand the first runner of the game.

Cincinnati got its first runner on with one down in the second when Jay Bruce took a 2-1 fastball the other way for a low line drive double by third, but Gio Gonzalez stranded the Reds' outfielder at second in a 17-pitch frame. After Latos sets the Nats down in order in the third, the Nats' left-hander retook the mound and worked around a two-out error by third baseman Ryan Zimmerman to complete a 10-pitch top of the third that had the 26-year-old starter at 42 pitches, 27 of them strikes after three scoreless in Nationals Park. Ian Desmond hit a two-out single in the Nats' fourth, but Danny Espinosa grounded weakly to first on the first pitch he saw from Latos and there was no score after three in D.C.

Gio Gonzalez got the first two outs of the fourth on four pitches, and completed a nine-pitch 1-2-3 frame for his fourth scoreless inning in Nationals Park. Mat Latos worked around a bad call on a ball four and a two-out walk to Xavier Nady to complete his fourth scoreless on 71 pitches. Back on the mound in a hurry, Gio Gonzalez gave up a two-out double off the out-of-town scoreboard in right on a two-bagger by Reds' catcher Devin Mesoraco, but Gonzalez dropped a cruel 1-2 curve in on the opposing pitcher for a called strike three to end a 13-pitch 5th.

Gonzalez was at 64 pitches, 43 strikes after five when he stepped up to the plate and connected for a fly to short right that fell in for the fourth-year pro's first MLB hit. Took Gio (who pitched in the AL til this year) 16 at bats to do it. A line drive single to center by Ian Desmond put Gonzalez in scoring position with one down. Danny Espinosa worked a six-pitch walk out of Latos to load the bases for Ryan Zimmerman, who grounded to short. Reds' shortstop Zack Cozart threw home for the force and the second out. Two down, but the bases were still loaded. Adam LaRoche came up next, and he came through with a two-out, two-run single to center that made it 2-0 Nats after five innings in Nats Park.

A fly to right and two swinging K's from the Reds' Zack Cozart and Joey Votto had Gio Gonzalez through the top of the sixth. Cozart chased a full-count change that dropped out of mid-air and Votto K'd swinging through a fastball up high. Gio Gonzalez rolled through six scoreless with a 16-pitch 1-2-3 frame in Nationals Park. 80 pitches, 53 strikes, 6 K's collected, 0 walks, 0 walks, 0 walks, two hits allowed, 9/2 GO/FO and he's back out for the seventh after Reds' reliever Sam Lecure sets the Nats down in order. 17 pitches, three outs and one more K later, Gonzalez was through 7.0 IP on 97 pitches, 64 strikes. 7 K's in Gonzalez's Nationals Park debut. And he was done:

Tyler Clippard took over in the eighth, battling Wilson Valdez for eight pitches in the first at bat and getting a grounder to third that got by Ryan Zimmerman, who couldn't make a backhand play. Ruled a leadoff double for the Reds' second baseman, but he was stranded there three batters later as the Nats' right-hander reliever completed a 23-pitch frame with back-to-back strikeouts to preserve the Nats' 2-0 lead. After the Nats failed to add to their lead in the bottom of the eighth, Brad Lidge took the mound in the ninth and issued a one-out to Joey Votto to bring the tying run to the plate in the form of veteran infielder Scott Rolen, who doubled by third and down the left field line. Second and third, one out for Jay Bruce. Davey Johnson then had his closer walk Reds' outfielder Jay Bruce intentionally to load the bases and bring Ryan Ludwick up, and the Reds' outfielder got a grounder by Zimmerman at third. Two runs scored as the ball rolled into left. 2-2 game. Lidge held it there, but blew the save.

Wilson Ramos got the home crowd excited in the bottom of the frame, however, doubling to right with one down off Reds' right-hander Jose Arredondo. Brett Carroll came on to run for the catcher. Pinch hitter Mark DeRosa's walked, and Ian Desmond stepped in with two on and one out, with the game tied at 2-2 in the Nats' 9th. Infield single. Bases loaded. It was up to Danny Espinosa, but the Nats' second baseman grounded back to the mound, Arredondo threw home, 1, and the Reds' catcher threw to first, 2, 1-2-3 inning-ending DP.

Craig Stammen dominated the Reds in a 10-pitch, nine-strike 1-2-3 10th in which he struck out the side, and Ryan Zimmerman was hit by the first pitch by Reds' reliever Alfredo Simon in the Nats' half of the extra frame. Adam LaRoche popped out foul of third in the next at bat, bringing Jayson Werth up with one on and one out. Werth made contact on an ugly swing at a 2-2 slider and sent a slow roller to short for an infield single. Runners on first and second, one down for Xavier Nady. The Nats' outfielder grounded weakly to third, Scott Rolen fielded and threw to first, in time. Two down. Roger Bernadina came up next with runners on second and third, and Simon bounced one, that got away from the Reds' catcher, Zim broke from third and scored, sliding in safely for the win! Nats win! Nats win!! 3-2 final on a walk-off wild pitch! 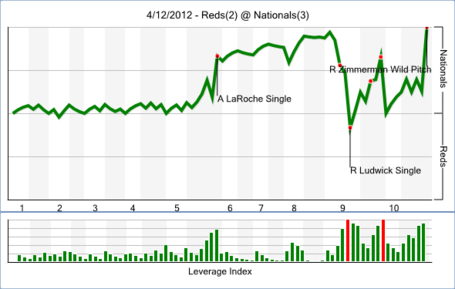