Share All sharing options for: Washington Nationals Win 2-1 Over Cincinnati Reds On Jayson Werth Walk-Off Single In The 13th.

Jordan Zimmermann went 7.0 innings on 80 pitches in his first start of the year last week in Chicago's Wrigley Field, but the right-hander got just one run of support while he was on the mound in a game in which he allowed two runs, one earned, while striking out four and getting 10 groundouts and 13 fly ball outs in what ended up a 4-3 Nats' loss to the Cubs. The Nationals' offense didn't support the Nats' 25-year-old '07 2nd pick tonight either, though Zimmermann did get help from the defense early and often in his second start of the year against the Cincinnati Reds in Nationals Park.

A sliding catch in right field by Jayson Werth robbed Cincinnati center fielder Drew Stubbs of a leadoff single in the first at bat of the game, and after Zimmermann issued a two-out walk to the Reds' left-handed hitting first baseman, Joey Votto, the Nats' right-hander got a line drive to center from Scott Rolen that Roger Bernadina caught to end a 14-pitch first inning. After the Nationals' top three went down in order against Reds' right-hander Bronson Arroyo in the bottom of the first, Zimmermann returned to the mound and struck Jay Bruce out with an 84 mph full-count slider for K no.1 on the day before retiring the next two batters to set the Reds down in order, leaving Zimmermann at 25 pitches total, 17 of them strikes in two scoreless.

Bronson Arroyo singled off Zimmermann in the third, but a force at second got the Reds' pitcher off the basepaths and the Nats' right-hander got a groundout to third from Cincinnati shortstop Wilson Valdez to end a 21-pitch third, after which the Reds' starter retired the Nats in order on 10 pitches in his third scoreless and hitless frame of the game.

The Nats' infield shift against Joey Votto cost Zimmermann a leadoff single in the Reds' fourth when a dribbler just to the right of mound rolled untouched to the outfield grass behind second as the realigned Ian Desmond and Danny Espinosa hurried back toward the middle of the infield. Desmond helped his pitcher out in the next at bat, however, throwing from deeeep in the hole in time to get Scott Rolen on a grounder with eyes for left. A nice pick on the play by Adam LaRohce, and a nice diving play and throw by Ryan Zimmerman on a two-out grounder by Ryan Ludwick ended Zimmermann's fourth scoreless after 12 pitches.

Ryan Zimmerman followed up his diving play at third in the top of the fourth with a one-out double to center field for the first hit off Reds' starter Bronson Arroyo in the bottom of the frame, but two fly balls to left field later, the Nats' FOF was stranded at third. 0-0 after four. Former National Willie Harris doubled on a 2-1 fastball from Jordan Zimmermann in the Reds' fifth, took third on a groundout to short by Reds' catcher Ryan Hanigan and scored on a sac fly to center by the opposing pitcher that gave Cincinnati a 1-0 lead after five. A 12-pitch frame had Zimmermann at 70 pitches, 50 of them strikes after 5.0 IP in which he allowed 3 H, 1 R, 1 ER, 1 BB while striking out 2, 9/2 GO/FO.

Roger Bernadina worked the count full with one down in the Nats' fifth and doubled to right center on a full-count slider from Arroyo, slamming on the brakes as he rounded second and saw Nats' third base coach Bo Porter telling him to pull up. Bernadina's second double of the year was only the second hit for the Nats tonight in five innings against the Reds' starter. Wilson Ramos got punched out on a check swing strike three in the next at bat, however, and Jordan Zimmermann lined out to first to end Arroyo's fifth scoreless frame of the evening.

Roger Bernadina tracked down a hard hit fly to center off Wilson Valdez's bat for the first out of the sixth, but Zimmermann missed with four straight 0-2 pitches to walk Joey Votto with one down. The Reds' first baseman got caught in no man's land off first on a soft liner to second in the next at bat though and another nice play by the Nats' infield, Espinosa this time with the catch and throw to Adam LaRoche, resulted in an inning-ending DP. Ian Desmond singled to center on a full-count fastball from Arroyo in the bottom of the sixth after making two outs on two pitches in his first two at bats. A sac bunt by Danny Espinosa moved Desmond into scoring position, but a fly to right by Ryan Zimmerman and a check-swing groundout to third by Adam LaRoche stranded Desmond there as the Reds' starter completed his sixth scoreless frame in Nationals Park.

With no run support yet again, Jordan Zimmermann returned to the mound in the seventh down 1-0. A weak grounder to first by Jay Bruce and a swinging K on a 94 mph fastball from Ryan Ludwick followed, but a two-out error on a grounder to first by Willie Harris and an error on a high chopper to short by Ian Desmond extended Zimmermann's inning by seven pitches before Bronson Arroyo's groundout ended the top of the frame with the Nats' right-hander at 100 pitches total and likely done for the night with no support on the scoreboard from the Nationals' offense.

Ryan Mattheus took over for Zimmermann in the eighth, giving up a one out walk in a scoreless inning of work. Bronson Arroyo returned to the mound in the bottom of the frame and got the first out on a grounder back to the mound by Wilson Ramos. Nats' skipper Davey Johnson then announced Chad Tracy as the pinch hitter, prompting the Reds' Dusty Baker to make a move for left-hander (and former Expos' 1st Rounder) Bill Bray, so the Nats' manager burned a bat and brought Xavier Nady to the plate. Two pitches later the game was tied when the X-Man hit his first HR as a National out to the visiting team's bullpen and just over the fence off Reds' left fielder Ryan Ludwick's glove. Tie game. 1-1 after eight. Somewhere Bronson Arroyo just destroyed a water bucket or one of his acoustic guitars.

Henry "Lightning" Rodriguez threw an 8-pitch, 1-2-3 top of the ninth, setting Ryan Zimmerman up for a leadoff walk-off opportunity against Reds' right-hander Logan Ondrusek, but a weak groundout to second followed, disappointing Nats fans who've come to expect the Face of the Franchise's late-game heroics. Jayson Werth came through with two down, working the count full and then singling to center in front of Mark DeRosa, whose two-out single through short put two on with two out for Roger Bernadina, but the Shark K'd swinging through a full-count fastball to send this one into extra innings tied at 1-1.

Brad Lidge bounced back from Thursday's blown save in the opener with an 8-pitch 1-2-3 10th tonight in Nationals Park. Reds' lefty Aroldis Chapman followed with a 9-pitch, 1-2-3 bottom of the inning. Tom Gorzelanny got a little help from Jayson Werth, who made a sliding catch on a two-out line drive to right by Jay Bruce to end the top of the eleventh, but the Nationals failed to score in the bottom of the frame so it was on to the 12th, where Ryan Ludwick doubled to left to start the Reds' half of the inning. Pinch hitter Zack Cozart helped the Nats out by popping up a bunt attempt that Wilson Ramos caught for out no.1 of the Reds' 12th. Gorzelanny walked Reds' backstop Ryan Hanigan to put two runners on, but struck out pinch hitters Chris Heisey and Drew Stubbs to keep it tied through eleven and a half.

Roger Bernadina walked with one down in the Nats' twelfth to put himself in scoring position with Wilson Ramos at the plate against Reds' right-hander Alfredo Simon. The Shark was running on contact when Ramos connected on a grounder, but he took much too wide a turn past third as it rolled out to short, and got caught in a rundown for a fairly awful 6-5-2-6 putout. Ramos almost doubled up on the play, but managed to slide in safely at third after the Reds ran Bernadina down. With Steve Lombardozzi at the plate, and a runner at third, the crowd started cheering, "Wild pitch, [clap clap]! Wild pitch [clap clap]," hoping for a replay of last night's walk-off win, but the Reds' right-hander got the rookie infielder looking with a 93 mph 2-2 fastball inside to send it to the lucky 13th.

Joey Votto sliced an opposite field single to right with one down in the Reds' thirteenth, but Craig Stammen, coming off his 10-pitch, 1-2-3 inning last night, put in another strong effort, striking out the next two batters to complete an 18-pitch inning. Danny Espinosa reached on an infield single in the Nats' half of the 13th, beating a throw to from short by Zack Cozart to first to bring Ryan Zimmerman up again, but Reds' lefty Sean Marshall walked the walk-off threat to get to left-handed hitting Adam LaRoche, who has a .246/.302/.431 line against lefties in his career. LaRoche walked too, leaving it up to Jayson Werth, who's hit lefties in his career to the tune of a .279/.383/.526 line until last year when he mysteriously dipped to .184/.307/.368. This time Werth comes through, singling to center AROOOOOO!!! on a 1-2 bender to bring Espinosa home for the walk-off win. Walk-off single, 2-1 Nats. Cheer your Werth, NatsTown!!!

• Doghouse's Post Game WPA Graph: "Game 8: Baseball is a marathon, not a sprint.": 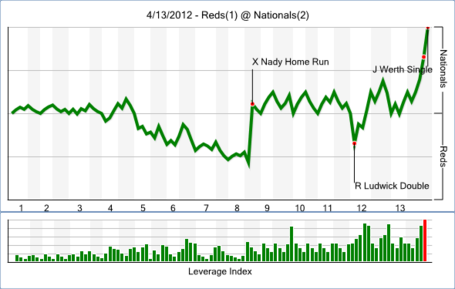 (h/t to cookielover for "XtraordiNady.")