With a four-game win streak on the line in the third game of the Washington Nationals four-game home-schedule- opening set with the Cincinnati Reds, the Nats turned to 28-year-old right-hander Edwin Jackson this afternoon, looking for another strong start from a pitching staff that's so far lived up to the hype. A 7-pitch, 5-strike, 1-2-3 top of the first got the World Series-winning (w/ St. Louis) starter who signed a 1-year/$11M dollar deal in D.C. this winter off to a good start, but after Reds' starter Homer Bailey retired the top of the Nats' order in order in the bottom of the first, Jackson gave up a run on two hits as he surrendered a one-out double that got by a diving Ryan Zimmerman at third and after a HBP on Reds' outfielder Chris Heisey, gave up an RBI single through short to make it a 1-0 Reds early. Zimmerman got hold of a grounder to third from Drew Stubbs in the next at bat, however, and stepped on the bag before throwing to first for the inning-ending 5-3 DP. A 9-pitch frame had E-Jax at 16 pitches, down 1-0 after one and a half in Nationals Park.

Reds' right-hander Homer Bailey walked Adam LaRoche to start the Nats' second, then after Jayson Werth grounded into a force that took LaRoche off the basepaths, Cincinnati's 25-year-old '04 1st Round pick issued a one-out walk to Xavier Nady, but he had two down when Jesus Flores stepped to the plate and lined an RBI single over short to bring Werth in from second and tie the game up at 1-1.

After the Nats tied it up, Jackson got the opposing pitcher swinging with a filthy 1-2 slider, got Willie Harris to chase an 0-2 curve and got a high chopper toward third that Ryan Zimmerman leapt for, barehanded and threw to first where Adam LaRoche stretched across the basepath and makes the catch in foul territory. What was Davey Johnson saying about the Nats' defense again? Adam LaRoche is getting it done at the plate too. After walking in his first at bat, the 32-year-old left-handed power threat came up with two on and one out in the Nats' third, after Bailey walked Danny Espinosa and gave up an infield single by Zimmerman, and LaRoche ripped into a 91 mph 1-1 two-seamer and sent a screamer out to right-center and all the way to the out-of-town scoreboard for a two-run double that made it 3-1 Nats on LaRoche's second two-bagger of 2012 and 9th and 10th RBI's of the year.

Edwin Jackson retook the mound in the fourth with a 3-1 lead and retired the Reds in order on nine pitches, leaving the Nats' right-hander at 38 pitches total, 29 of them strikes after 4.0 IP in Nationals Park. Jesus Flores and Jackson hit back-to-back one-out singles in the bottom of the fourth to bring Ian Desmond up with runners on the corners, but Flores broke for home on a grounder to short and got gunned down by Zack Cozart. Flores came up limping on the play. After Danny Espinosa lined out to second to end the inning, however, Flores came back out and was apparently fine, and the Nats still led 3-1.

After a 10-pitch, 1-2-3 top of the 5th for Edwin Jackson, the right-hander was at 48 P, 37 strikes through 5.0 IP and he'd set down ten straight. The Nationals failed to score in the 6th, and Jackson retook the hill and threw a 9-pitch, 1-2-3 6th to set down his 11th, 12th and 13th-straight Reds going back to a 2-out single in the 2nd. 57 pitches, 43 strikes through six innings. Still 3-1 Nats. Jesus Flores connected with a 1-0 fastball and pushed a one-out single to right in the Nats' sixth, leaving the catcher 3 for 3 today and 6 for 10 on the season, but the Nationals couldn't add to their lead in the bottom of the frame.

A fly to center by Joey Votto, and swinging K's by Jay Bruce and Wilson Valdez and Edwin Jackson was through seven on 66 pitches, having retired 16 batters in a row. A leadoff line drive single to center by Danny Espinosa, a one-out single to right by Adam LaRoche and an RBI double to right by Jayson Werth gave Edwin Jackson another run to work with as the Nationals went up 4-1 in the seventh. The Nats' right-hander started the eighth with a walk to Reds' left fielder Chris Heisey, giving the Reds their first base runner since the second and breaking his streak of batters retired at 16. Jackson got Reds' center fielder Drew Stubbs swinging with a 2-2 slider, Devon Mesoraco with a 95 mph 1-2 fastball and went to a full count with Scott Rolen before he blew the veteran Reds' infielder away with an 85 mph slider for E-Jax' 8th K of the day. 4-1 Nats, and Jackson's at just 85 pitches, 61 strikes after 8.0 IP. 5 straight K's for E-Jax.

Edwin Jackson stayed in to hit in the Nats' eighth and K'd trying to bunt, but no one cared. The right-hander came back out to the mound in the ninth, got a groundout to second from Willie Harris, a swinging K from Zack Cozart and a fly to center from Joey Votto to end it!! Complete game two-hitter. You've got to believe!!

Tonight's game story: Jackson throws a beauty of a game. 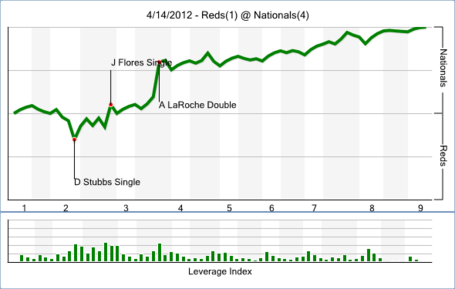