In a rare instance when 69-year-old Washington Nationals' skipper Davey Johnson, (who was four years old on April 15, 1947 when Jackie Robinson made his MLB debut, broke baseball's "color barrier" and started the change that would eventually fully integrate Major League Baseball), didn't have an anecdote to share, the Nats' manager told reporters this weekend that he'd never had the opportunity to meet the game-changing Hall of Famer who debuted in the majors sixty-five years ago today and finished his career ten years later in 1956, having compiled a .311/.409/.474 line in 1,382 games and 5,804 plate appearances with the Brooklyn Dodgers. "No. I saw him a lot on tv," Davey Johnson said, "My first tv was black and white, watching Brooklyn play the Yankees. But I would have liked to. I met just about everybody else almost during that era." Around Major League Baseball today, Jackie Robinson was honored as players once again wore his retired 42 to honor his contributions to the game and the country he played a part in changing. #42.

Johnson did field another question about Jackie Robinson after today's game. Asked for his thoughts about the former Brooklyn Dodger, the Nats' skipper said, "It's just a great day. He was one of my idols growing up. I was a shortstop and I paid more attention to [Phil] Rizzuto and [Pee Wee] Reese in the first television I saw, but I was impressed with the way [Robinson] played. I liked the way he played all out. Smart. Aggressive. Steal home. Take the extra base. So, it's a great there's a day after him."

• On a beautiful 77° day in Washington, D.C. this afternoon, 26-year-old Nats' '07 1st Rounder Ross Detwiler gave up a one-out single in the first before getting Reds' first baseman Joey Votto looking at a 2-2 fastball low and away that was called strike three, and Detwiler almost had out no. 3 on a grounder to short from Scott Rolen, but a throwing error on Ian Desmond (and a blown call by first base ump Mike Everett, who missed LaRoche touching the bag) put two runners on for Cincinnati slugger Jay Bruce, who took a full-count curve (after two close pitches were called balls) that was called ball four in spite of its middle-of-the-zone letter-high location. Ball four, bases loaded. Ryan Ludwick then came up and with some more help from home plate umpire Laz Diaz's stamp-sized strike zone, worked the count to 2-2 before launching a 94 mph fastball to the Red Porch seats to the left of center for a grand slam and a 4-0 Reds' lead.

• (ed. note - "Lest you think I've lost all objectivity, MisterIrrelevant.com's @ChrisMottram provided the following images on Twitter in support of the Nats' case against home plate umpire Laz Diaz, who got chirped out by the Reds' dugout after Votto's K and suddenly stopped calling strikes."):

Ross Detwiler came back with a seven-pitch 1-2-3 2nd after a 38-pitch 1st in which he gave up 4 unearned runs, and threw 18 pitches after Ian Desmond's two-out "error" extended the inning. 4-0 Reds after 1 and a 1/2 in Nationals Park. Nats' right fielder Jayson Werth took a one-out walk from Cincinnati right-hander Mike Leake to put Washington's first runner of the day on in the second, but the Reds' pitcher started a 1-4-3 DP on a grounder back to the mound from Mark DeRosa in the next at bat and the Reds led 4-0 after two innings in the nation's capital this afternoon.

Detwiler walked Joey Votto with one down in the Reds' third, but Scott Rolen grounded into a 4-6-3 DP to end a quick 12-pitch third. The Reds hit three straight one-out hits off the Nats' left-hander in the fourth with Ryan Ludwick, Chris Heisey, and Cincinatti backstop Ryan Hanigan singling in succesion to bring the Reds' fifth run around. 5-0 Cincinnati after three and a half. Ian Desmond dropped a bloop single into right field for the Nats' first hit of the day in the bottom of the fourth, and Danny Espinosa followed with hit no.2. Ryan Zimmerman walked to load the bases with no one out vs Leake. The Nats' RBI leader Adam LaRoche stepped to the plate and doubled to right in the next at bat, just inside the line. Two runs score. 5-2 Reds. One out later, after Jayson Werth popped out unproductively, an RBI groundout by Mark DeRosa made it a 5-3 game after four innings in Washington.

Reds' shortstop Zack Cozart, who's had an impressive series in D.C., started the fifth with a single to left, but a sharp grounder to first off Joey Votto's bat started a 3-6-3 DP that was expertly executed by Ian Desmond and Adam LaRoche to help Ross Detwiler through a 12-pitch 5th after which he was hit for by Roger Bernadina, ending Det's day after 5.0 IP, 6 H, 5 R, 1 ER, 2 BB, 2 K's, 1 Grand Slam. Bernadina took a one-out walk from Mike Leake and scored from first on a double to center by Ian Desmond that sailed over Chris Heisey's head for a two-run, two-bagger that made it a 5-4 game. Desmond took third on the throw home, but two outs later he was stranded there after Danny Espinosa and Ryan Zimmerman failed to bring him home. 5-4 after five.

Craig Stammen retired the Reds in order in the top of the sixth, collecting K's no. 8 and 9 in 6.2 IP this season, over which he's allowed just one run. After Mike Leake threw a quick 14-pitch sixth, retiring the Nationals in order, Stammen was back on the mound, where he surrendered a leadoff single to center after getting up 0-2 on Reds' catcher Ryan Hanigan. Leake showed bunt, then pulled back and lined a 1-1 fastball to center to put two runners on with no one out. Reds' skipper Dusty Baker had Brandon Phillips bunt, giving up one out, and a grounder to third that Zimmerman fielded gave Stammen out no.2. The Nats' skipper had Stammen walk Joey Votto to load the bases and Stammen got Scott Rolen on a check-swing strike three with a 2-2 breaking ball in the dirt. Still 5-4 Red after six and a half. Davey 2, Dusty 0.

Rick Ankiel was down 0-2 in the first at bat of the Nats' sixth, but he got around on a Mike Leake cutter and doubled to right field and off the lip of the grass where the warning track starts. Wilson Ramos' groundout to short failed to advance the runner, but it did end Leake's day as Dusty Baker went to the bullpen for right-hander Logan Ondrusek, allowing Davey Johnson to counter with left-handed bench bat Chad Tracy. Davey 3, Dusty 0. Tracy K'd swinging at a two-strike bender inside. Two down. It's up to Ian Desmond, and the Nats' shortstop comes through, lining to center on a 92 mph 0-1 fastball for an RBI single that scored Ankiel from second. Reds' catcher Ryan Hanigan dropped a strong throw in from center, and the game was tied at 5-5 after seven innings in Nationals Park.

Ryan Mattheus got the first two outs of the eighth fairly quickly, with the help of a web-gem-worthy diving play by Gold Glove third baseman Ryan Zimmerman, and Mattheus had no. 3 on a pop-up that Nats' catcher Wilson Ramos dropped for the Nats' second E of the game. Reds' outfielder Chris Heisey took second on the play, but a liner back to the mound off Ryan Hanigan's bat got Mattheus through the top of the 8th. Still 5-5. Hard-throwing Reds' lefty Aroldis Chapman got the first two outs of the Nats' eighth with swinging K's from Zimmerman and LaRoche, before a Jayson Werth one-out single to left interrupted what was a 15-pitch scoreless frame after Mark DeRosa flew out to right.

Ian Desmond charged on a soft pop, fielded a short hop and fired to first to get Reds' leadoff man Drew Stubbs for the 1st out of the ninth. Brad Lidge just missed with a 1-2 slider to Brandon Phillips and ended up giving up a double to center on a 3-2 pitch to the Reds' infielder, who reaggravated an injury earlier in the game and left after the one-out hit in the ninth. Brad Lidge got Zack Cozart looking with a full-count fastball on the 10th pitch of a long at bat against the Reds' shortstop, allowing Davey Johnson to put Votto on again, and Lidge dropped an 0-2 slider outside to get Scott Rolen swinging and end the top of the ninth with the score still tied at 5-5.

Aroldis Chapman retired the Nationals in order in the bottom of the ninth, adding two K's including an inning-ender on a 99mph 0-2 fastball to an over-powered Xavier Nady. Henry "Lightning" Rodriguez then took the mound as the Nats brough their own flamethrower into the game. A weak grounder to second and a swinging K on an 0-2 slider followed as the Nats' reliever recorded the first two outs. Cairo, Georgia's own Willie Harris then took a two-out walk from the Nats' right-hander before Ryan Hanigan grounded out to second to end a 16-pitch frame for Rodriguez. Still tied at 5-5 after nine and a half. Reds' reliever Jose Arredondo took over for Cincinnati in the tenth, retiring the Nats in order with some more help from the home plate ump. Another questionable strike call had mild-mannered Ryan Zimmerman barking at the ump and he slammed his helmet and bat down after he K'd swinging.

Tyler Clippard gave up a leadoff single on a broken bat blooper to center by Drew Stubbs, and after the Reds gave up an out bunting again when Ryan Zimmerman did his best Superman impression, diving for a popped up bunt attempt by Wilson Valdez, Zack Cozart singled and Joey Votto hit a two-run double to left to make it a 7-5 game. Another broken bat single by Scott Rolen brought Votto around and made it an 8-5 game before Clippard escaped a 21-pitch frame. Reds' lefty Sean Marshall gave up a back-to-back singles through short by Adam LaRoche and Jayson Werth, but got a force at second out of Mark DeRosa, a backwards K out of Jesus Flores and an assists from Reds' first baseman Joey Votto on a diving play at first to rob Wilson Ramos of a two-out game-extending hit. Reds win, 8-5 final, and salvage one of four in Nationals Park's season-opening series. 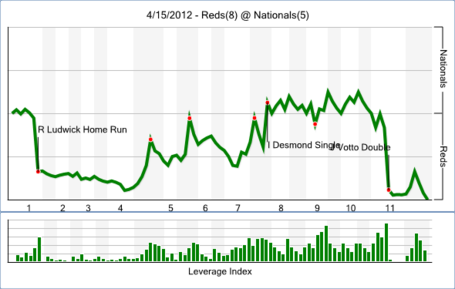 Look at all the random green inside the box and red outside! Pick a strike zone and stay with it, Laz. The 4-run first never should have happened, given there were three missed 3rd outs before the big hit (including the horrendous call at first), and the Reds ended up winning by... 3. (Yes, I know it never would have gone to extras, and it's a fallacy to assume the same game without the HR, blah, blah. I don't care--Blue stank today.)