Share All sharing options for: Washington Nationals' Stephen Strasburg Gets "W" In 6-3 Win Over Houston Astros, But Steve Lombardozzi Shines.

Stephen Strasburg made his first start in the majors in front of 40,000+ adoring fans in an electric Nationals Park back in June of 2010. Start no.20, the 23-year-old right-hander's first in Nationals Park this season, had an announced crowd of 16,245 on hand. Of course, it was an April series with a Houston Astros team that lost 106 games last season on a night when the Washington Capitals were playing the Boston Bruins in D.C. in Game 3 of the Stanley Cup Playoffs...but, uh... Are Stephen Strasburg starts no longer events in an event town? Or is it more about the time of year, rival entertainment and the opponent? fwiw: On April 15th 2011, the Nats drew 17,217 on a Friday night w/ Milwaukee. The previous Monday against Philly, 4/12 they drew 13,413. Discuss.

15 pitches, 10 strikes by Stephen Strasburg in a quick 1-2-3 first. Astros' leadoff man Jordan Schafer pops up behind short on a looping 80 mph curve that follows a 96 mph fastball inside from Strasburg, who gets the next two batters, shortstop Jed Lowrie and outfielder J.D. Martinez looking, Lowrie with a 97mph full-count fastball and Martinez with a one-two bender that breaks away from the bat of Houston's 24-year-old left fielder who couldn't hold up and couldn't come close. 1.0 scoreless in the books. The Nationals got a one-out single up the middle by today's second baseman Steven Lombardozzi in the bottom of the first, but two outs later Strasburg was back on the mound. A pop to Lombardozzi and a groundout to short got the Nats' right-hander two quick outs, but after working his way back from a 3-1 count, Strasburg gave up a line drive single to left-center by Astros' third baseman Chris Johnson, who powered a 98 mph fastball inside out to Xavier Nady. Four pitches later an 82 mph change caught Jason Castro off guard and Houston's catcher grounded out to second to keep it scoreless in Nats Park after one and a half...

25-year-old former Red Sox' prospect Kyle Weiland, acquired along with Lowrie in the trade last December that sent Mark Melancon to Boston, gave up two singles, one by Lombo in the first and one by Xavier Nady in the second, but he got through two scoreless on 23 pitches and got an opportunity to lay down a sac bunt in his first at bat after Astros' second baseman Jose Altuve singled to center on the first pitch of the third. Nine pitches later, after a sac bunt, backwards K and pop to Ryan Zimmerman foul of third, Stephen Strasburg was through 3.0 scoreless against the Astros on 45 pitches, 30 of them strikes.

Ian Desmond ripped a 92 mph 1-0 fastball by third into left and hustled out of the box, beating the throw in from J.D. Martinez for a one-out double in the Nats' third. In the next at bat, Steve Lombardozzi surprised everyone by trying to to bunt for a hit, and his speed forced Kyle Weiland to throw one away, by first, allowing Desmond to score from second for an early 1-0 Nats' lead. Strasburg got up 0-2 on J.D. Martinez in the first at bat of the fourth and bounced an 80 mph curve that got the outfielder swinging. El Caballo Carlos Lee popped up to short on a 96 mph 1-1 fastball, but Travis buck disrupted the flow by lining to right on a 95 mph first pitch fastball. Three pitches later a 1-1 curve got a fly to center from Chris Johnson that Rick Ankiel caught to end Strasburg's 10-pitch fourth.

#Nats' catcher Wilson Ramos started today's game with six hits, two of them doubles in 28 at bats. The 24-year-old catcher lined out to right in his first at bat against Weiland in the second. In Ramos' second at bat in the fourth, the Nationals' starting catcher hit his first HR of the year, sending a 2-1 fastball out the other way and over the far-left of the out-of-town scoreboard in right-center for an opposite field solo blast and a 2-0 Nats' lead. With a two-run lead, Strasburg retook the mound and got a hard-hit grounder to Adam LaRoche at first, a line drive to Desmond and a groundout to short in a quick six-pitch 1-2-3 fifth against the 7-8-and-9 hitters in the Astros' lineup. 61 P, 43 strikes through five scoreless for Strasburg in Nationals Park.

• The Lombo Lobby: Steve Lombardozzi singled to start the Nats' fifth, leaving the 23-year-old infielder 3 for 3 tonight in a start he was making because Davey Johnson thought Danny Espinosa needed a "mental break." The 2011 Minor League Gold Glove winner was 5 for 10 on the season after he lined the first pitch of the inning from Kyle Weiland to right, but he was doubled up on a Ryan Zimmerman grounder to second as the Nationals came up empty in the bottom of the frame.

• Respect The Arm: The Astros started strong against Strasburg in the sixth with Jordan Schafer and Jed Lowrie hitting back-to-back singles to put runners on the corners before the Nats' right-hander had recorded out. J.D. Martinez started down 0-2, but worked his way back to walk and load the bases with no one out, but "The Arm", Rick Ankiel, dared Jordan Schafer to run on a 310ft Carlos Lee fly to center, firing a strike in to Wilson Ramos at home to hold the runner at third and draw a standing O with a throw. A 95 mph 2-2 fastball got Strasburg a swinging K from Travis Buck and Strasburg was one out, then one strike away from escaping unharmed when Astros' third baseman Chris Johnson connected with a 97 mph fastball and drove it to right for a two-out, two-run double that tied it at 2-2. A 32-pitch frame had Strasburg at 93 pitches after six innings pitched.

• LomboLobbyGoesCrazy!!: Roger "The Shark" Bernadina hit for Stephen Strasburg with two down in the 6th, officially ending Strasburg's third start of the year after 6.0 IP, 6 H, 2 R, 2 ER, 1 BB, 5 K's, 93 P, 62 S, 5/2 GO/FO. Bernadina walked to put two on with two out and Ian Desmond due up, and the Nats' shortstop walked too to load the bases for second baseman Steve Lombardozzi, who came through with a bloop single to left to leave him 4 for 4 on the night and put the Nationals up 4-2 over the Astros. Lombardozzi hustled around for a double and then scored from second on Ryan Zimmerman's two-run single in the next at bat. 6-2 Nats. #andtheLomboLobbygoescrazy

• The Return of J-Max: Jose Altuve doubled and former Nats' outfielder Justin Maxwell beat out a grounder to short on which Ian Desmond didn't even bother throwing. But Nationals' left-hander Sean Burnett struck out the next two batters before Nats' Skipper Davey Johnson brought Ryan Mattheus out to face J.D. Martinez with two on and two out. A check-swing strike three on a 1-2 slider got out no.3 to preserve the Nats' four-run lead. Ryan Mattheus came back for the eighth, giving up an unearned run on a double by Travis Buck and a three-base error on a line drive to center that Rick Ankiel misjudged and missed. 6-3 after seven and a half. Henry Rodriguez threw a 17-pitch, 12-strike 9th, giving up a 2-out walk, but he got his second save, and Strasburg gets the W. Strasburg improves to 2-0 on the year. 6-3 Nationals over the Astros. 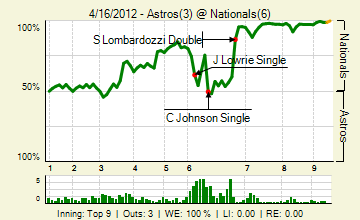