Houston's 33-year-old lefty Wandy Rodriguez entered tonight's game (5-1) in nine career starts against the Nationals, with 18 walks (3.06 BB/9), 44 K's (7.47 K/9), a 4.92 ERA, 1.32 WHIP and a .263 BAA when facing Washington, but the one loss to the Nats did come in Nationals Park at least, back in September of 2010 when Danny Espinosa hit a two-run two-run blast off then-Astros' reliever Jeff Fulchino in the seventh after Rodriguez had walked current-Astros' outfielder and leadoff man Justin Maxwell to start the Nats' inning. Espinosa's two-run dinger was his 4th HR in his first 59 MLB plate appearance after he was called up late that year, and it was the difference in a come from behind 4-3 Nats' win. Espinosa entered play tonight, at the start of his second full-season in D.C., with a .194/.333/.278 line and one home run 10 games and 46 plate appearances into the 2012 campaign. In his career he's 1 for 6 against the Astros' starter, however, so maybe he'll have to start to heat up against Houston's pen...

Nats' right-hander Gio Gonzalez gave up a leadoff single on the first pitch of the game, but he threw a quick 15-pitch first against the Astros tonight. Danny Espinosa hit a one-out single to center off Wandy Rodriguez in the bottom of the first, taking a 1-0 two-seamer back up the middle, but the Nats' second baseman was erased two pitches later when Ryan Zimmerman grounded into an inning-ending DP, ending a 5-pitch first by the Astros' lefty. Gio Gonzalez went back out and struck out the side in the Astros' second, taking Chris Johnson down with an 85 mph 3-2 change, Travis Buck down with a 1-2 bender that was called strike three and Chris Snyder out with an 0-2 curve that Gio got the Astros' catcher to chase. 14 pitches in the second, 29 total in two scoreless for the Nats' left-hander.

The two left-handers are dealing. 0-0 after two in Nats Park.

A 14-pitch third by Gio Gonzalez had the Nationals' lefty at 41 pitches total, 26 of them strikes, with a walk and four K's in 3.0 IP, with seven-straight batters set down (four of them via K's) after the two-out walk to J.D. Martinez in the first. Jesus Flores K's looking, Gio flies out to the track in CF, Ian Desmond grounds back to the mound, and the Astros' lefty is through an 11-pitch third on 29 pitches, matching Gio frame for scoreless frame through three. A 7-pitch, 1-2-3 fourth for Gio Gonzalez saw the eighth, ninth and tenth straight Astros go down to the Nats' lefty who was through four scoreless on 48 P, 32 strikes, still 0-0 in Nats Park.

Jayson Werth hustled out of the box and took second safely on a pop to right-center that a sliding Justin Maxwell couldn't catch. Two out double by Werth. Adam LaRoche stepped in next and popped to shallow left, but Astros' left fielder J.D. Martinez and shortstop Jed Lowrie tracked it but pulled back at the last second and let it drop between them for an RBI "single" by the Nats' first baseman that gave the Nationals a 1-0 lead when Werth came around.

After a 12-pitch scoreless 5th for Gio Gonzalez and another scoreless frame by Wandy Rodriguez, Astros' second baseman Jose Atluve started the sixth with single, breaking a streak of 13-straight batters set down by the Nats' left-hander. A sac bunt by Wandy Rodriguez moved Altuve up and put an Astros' runner in scoring position for the first time tonight against Gonzalez, and the Nats' 26-year-old starter threw a wild pitch to move Altuve to third before he got Justin Maxwell on a check-swing strike with a full-count curve, issued a two-out walk to Jed Lowrie and got a force at second on a grounder to short by J.D. Martinez to end his sixth scoreless frame after 18 pitches. 78 pitches total, 48 of them strikes for Gio Gonzalez, who's thrown 13.0 scoreless over the last two starts.

Make that 14.0 scoreless as Gio sets the Astros down in order in the seventh, ending the frame with back-to-back K's from Chris Johnson and Travis Buck, who K's swinging through an 80 mph 1-2 curve. 13 pitches in the Astros' seventh, 2 more K's, 8 total for Gio Gonzalez in his 7th scoreless inning against Houston. Gio's Line: 7.0 IP, 2 H, 0 R, 0 ER, 2 BB, 8 K's, 91 pitches, 57 strikes, 9/1 GO/FO. 1-0 Nats after seven in Nationals Park. Tyler Clippard took over in the eighth, giving up a bunt single by pinch hitter Jordan Schafer, but a fly to center by Altuve, a swinging bunt by Jason Castro and a swinging K by Justin Maxwell later the Nats' right-hander was through a nine-pitch, eight-strike scoreless top of the eighth with the Nationals still up 1-0 on the Astros.

The Nationals went down in order against 25-year-old Houston right-hander Rhiner Cruz in the bottom of the eighth and the Nats turned to Brad Lidge, who was looking for save no. 225 of the 35-year-old right-hander's 11-year MLB career. Astros' infielder Jed Lowrie lined to right on an 0-1 slider from Lidge for a leadoff double into the right field corner, then Lidge walked J.D. Martinez to put two on with no one out against El Caballo, Carlos Lee. An 0-2 slider popped Houston's slugging first baseman up for out no.1. A 3-1 fastball got a fly to center from Chris Johnson for out no.2, and a groundout to first secured save no. 225. Lidge gets the save, Gio Gonzalez gets the win. The Nationals make one run hold up and take the first two of four from Houston to improve to 9-3 on the year. 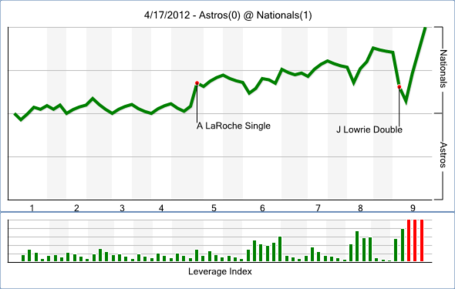