Washington Nationals Win 3-2 Over Houston Astros, Improve To 10-3 On The Season.

Share All sharing options for: Washington Nationals Win 3-2 Over Houston Astros, Improve To 10-3 On The Season.

Jordan Zimmermann caught the outside corner with a 95 mph 2-2 fastball to Houston's leadoff man Jordan Schafer to ring the first batter of the game up looking, but Astros' infielder Jed Lowrie connected with a 94 mph four-seamer in the next at bat for the first single of the night off the Nats' 25-year-old right-hander. Zimmermann got behind Travis Buck, but popped the 'Stros' outfielder up with a 2-1 curve. Lowrie was running, didn't see where it went, and the Nats' infield deked the runner into a double play when Ryan Zimmerman caught the foul pop and fired to first before Lowrie could return to the bag. A 5-3 DP and a 14-pitch frame for the Nationals' starter in the top of the first. After helping out in the field, Ryan Zimmerman hit a two-out double, his fourth of the year, off Astros' right-hander Lucas Harrell in the bottom of the first, but the Nats' third baseman was stranded when Adam LaRoche grounded out to end a scoreless frame for Houston's starter. 0-0 after one.

Zimmermann got one out with one pitch against El Caballo Carlos Lee in the top of the second, but he hit Chris Bogusevic on the foot with a 1-2 slider, losing the second batter of the frame to a HBP. A 1-2 slider to Astros' third baseman Chris Johnson got the Nats' starter a 6-4-3 DP though, Ian Desmond, Danny Espinosa and on to Adam LaRoche to end a 10-pitch frame. 24 pitches, 15 strikes, two double plays in two scoreless. Still 0-0 in Nationals Park. Nats' right fielder Jayson Werth did everything he could to score a run for Jordan Zimmermann in the Nats' second, walking, stealing second and taking third on Wilson Ramos' swinging K on a ball in the dirt, but the Astros' right-hander Lucas Harrell walked Roger Bernadina to get to the opposing pitcher and retired Jordan Zimmermann to end a 27-pitch second which left him at 46 pitches total after two in Nats Park.

A 10-pitch, 1-2-3 third for Jordan Zimmermann had the right-hander at 34 pitches total, 22 of them strikes in three scoreless. Seven pitches and three outs later, the Nats' starter was back on the mound in a 0-0 game, with no offensive support yet again. Astros' outfielder Jordan Schafer bunted for a hit on the first pitch of the fourth, dropping a slow roller toward first and beating the covering pitcher to the bag. The former Atlanta Braves' prospect stole his sixth base of the year in the next at bat as Zimmermann got behind Jed Lowrie, whose groundout to the right side moved the runner to third with one down. Another groundout from Travis Buck brought Schafer in and made it 1-0 Astros after a 13-pitch frame for the Nats' starter.

A 14 pitch fourth for Astros' Lucas Harrell, who was thru 4.0 scoreless on 67 P, having allowed just one hit by the Nats' batters. 1-0 Houston after four. Jordan Zimmermann gave up a two-out double by Houston infielder Marwin Gonzalez in the top of the fifth, but he got the opposing pitcher looking with an 0-2 fastball to end an 18-pitch inning that had the Nationals' starter at 65 pitches, total, 44 of them strikes after five innings pitched. Ian Desmond tested Jordan Schafer's range with a two-out blast to straight-center in the Nationals' fifth, but the Astros' right-handed starter pitched around a leadoff walk to Wilson Ramos to complete his own scoreless fifth scoreless. Still 1-0 Houston.

Jordan Zimmermann rang former Nats' outfielder Justin Maxwell up with a full-count slider that was called strike three, ending a 13-pitch 6th with Washington still trailing 1-0. Zimmermann was at 78 pitches total, 53 of strikes after six. Nats' second baseman Danny Espinosa started the Nats' sixth with a leadoff single for just the second hit of the night off Lucas Harrell, but the Astros' right-hander was through the inning four pitches later after a fly to center by Ryan Zimmerman and a DP grounder off Adam LaRoche's bat ended the bottom of the inning. Still 1-0 Houston.

An 8-pitch, 1-2-3 7th for Jordan Zimmermann had the Nats' starter at 86 pitches, 49 of them strikes after 7.0 IP in which he's allowed four hits, one run and struck out four while inducing 10 ground ball outs. But Zimmermann still trailed 1-0 in the 7th. Nats' center fielder Rick Ankiel connected with a first-pitch change, driving an opposite field double to left-center and off the bullpen wall with one down. A balk by Harrell moved Ankiel to third, but Wilson Ramos K'd chasing a 1-2 slider outside for out no.2 of the inning. Roger Bernadina, who's 0 for 1 with a walk and a K, goes the other way with a 1-0 change and doubles to left to bring the tying run in. 1-1 game. Harrell's done. So is Zimmermann, as Steve Lombardozzi hits for the Nats' right-hander.

Lombardozzi walked as Bernadina stole third, but Astros' right-hander Fernando Rodriguez popped Ian Desmond up foul of first to end the bottom of the seventh with the score still tied at 1-1. Astros' catcher Jason Castro battled Nats' right-hander Ryan Mattheus in an eight-pitch at bat that ended with a leadoff double off the wall in center to start the Astros' half of the eighth. For the second time this week, Ryan Zimmerman made a diving play on a popped-up bunt attempt by Marwin Gonzalez for the first out of the inning. A diving backhand stab at third by Zimmerman robbed Jose Altuve on a low hard-hit liner. Two outs. Jordan Schafer got hold of a 92 mph 1-1 fastball from Mattheus and lined it to right to bring Castro home and make it 2-1 Astros in the 8th.

Danny Espinosa took a leadoff walk and Ryan Zimmerman followed with a single through short to chase Astros' right-hander Fernando Rodriguez in favor of left-hander Wesley Wright with Adam LaRoche due up in the bottom of the eighth. Two on, no outs. LaRoche worked back from an 0-2 count to take a bases-loaded walk. Wright was lifted in favor of Rhiner Cruz, who came on to face Jayson Werth. Werth worked the count full and... took ball four. Bases-loaded walk. The Astros force in a run, 2-2 game. Rick Ankiel grounded into a force at home, but avoided the DP, so in front of Wilson Ramos, who followed with an RBI fly to center that made it 3-2 Nationals when LaRoche tagged and scored to make it 3-2 after eight. Henry "Lightning" Rodriguez came on to end it in the top of the ninth. After missing with an 0-2 slider, Rodriguez came back with another bender for a called strike three on Justin Maxwell. ONE! El Caballo Carlos Lee flew to center, TWO!! And Brian Bogusevic grounded to second to end it. 1-2-3, Nats win, 3-2 final. Another one-run win, and eight of their last nine overall. 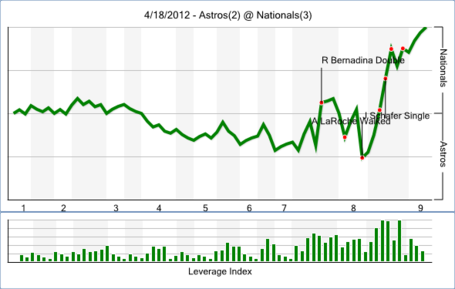