Washington Nationals' lefty Ross Detwiler missed with a 1-2 curve outside to Emilio Bonifacio, but after the Miami Marlins' outfielder and leadoff man fouled off a 2-2 sinker, he took a called strike three on a knee-high 94 mph four-seam fastball inside from Detwiler for the second out of what ended up a 15-pitch 1-2-3 top of the first for the 26-year-old Nats' 07 1st Round pick. Detwiler's opponent on the mound tonight, 33-year-old former Chicago Cubs' starter Carlos Zambrano, retired the Nats in order on 10 pitches in the bottom of the first, striking Ian Desmond out before Danny Espinosa flew out to left and Ryan Zimmerman grounded out to short.

Giancarlo Stanton entered tonight's game 25 for 61 with a .410/.471/.934 line in 15 games and 70 plate appearances at Nationals Park in which the 22-year-old '07 2nd Round pick has hit eight doubles and eight home runs, while taking six walks and striking out 16 times. The Marlins' right fielder singled to left on the first pitch of the second from Ross Detwiler and one out later took third when Austin Kearns doubled to left field on a 3-1 four-seamer from the Nats' starter. Both runners were eventually stranded, however. Detwiler got help from Rick Ankiel's arm's reputation on a fly to shallow center by John Buck when Stanton didn't even think about running from third and the Nats' lefty got a swinging K from Donnie Murphy with the help of a 94 mph 0-2 fastball upstairs. 15 pitches for Detwiler again in the second, 30 pitches total in two scoreless.

Detwiler issued his first free pass to Marlins' shortstop Jose Reyes with one out in the third. Reyes tried to steal his fifth base of 2012 with Emilio Bonifacio at the plate, but a strong throw by Jesus Flores and a bad jump by Reyes had the 28-year-old, first-year Marlin hustling back to the first base bag. Detwiler dropped a 2-2 slider on Emilio Bonfacio for his 3rd K of the night and Bonifacio's second, then collected his fourth strikeout with a 93 mph 2-2 sinker inside that was called strike three on an unconvinced Marlins' third baseman Hanley Ramirez. 20-pitch frame for Detwiler, who's up to 50 pitches after three and up 1-0 three pitches into the Nationals' third after Rick Ankiel absolutely crushes a 2-0 fastball from Carlos Zambrano. Over the 402ft sign, over the ambulance behind the CF fence and GONE! Rick Ankiel takes Zambrano yard and then some, 1-0 Nationals on Ankiel's first home run of the year, his first since last September and the Nationals' first hit of the night.

It took Detwiler just eight pitches total to get through a 1-2-3 top of the fourth against Stanton, Gaby Sanchez and Austin Kearns, with Kearns striking out swinging through the 80 mph 0-2 slider that followed a 91 mph fastball from the Nats' left-hander. Detwiler's at 58 pitches after four scoreless frames. Carlos Zambrano retired the Nats in order in the bottom of the fourth, setting Espinosa, Zimmerman and LaRoche down in order to keep his one-hitter going through four. Ryan Zimmerman almost made a Gold Glove-caliber play on a swinging bunt from John Buck, but Zim had to dodge Detwiler and he threw wide of first pulling LaRoche off the bag, resulting in an infield single for the Marlins' catcher. The Nationals almost turned a double play in the next at bat, but Donnie Murphy beat Danny Espinosa's throw to first after the force. Another force at second on a swinging bunt by Carlos Zambrano and a fly to left that Jose Reyes just missed ended a five-pitch fifth for Ross Detwiler.

After homering in his first at bat in the third, 32-year-old Nats' center fielder Rick Ankiel singled to center with two down in the top of the fifth for the second hit of the game off Carlos Zambrano, who got a force at second out of Jesus Flores to end a 10-pitch fifth. 60 pitches total for the Marlins' starter. Ross Detwiler got a grounder back to the mound from Emilio Bonifacio, got the Marlins' Hanley Ramirez swinging at an 0-2 slider and got Giancarlo Stanton with a 3-2 change for a called strike three to end a 16 pitch sixth with seven K's and 79 pitches in six scoreless frames.

The Nationals are still stretching Ross Detwiler out, so the left-hander's done after: 6.0 IP, 3 H, 0 R, 0 ER, 1 BB, 7 K's, 79 P, 52 K's, 8/3 GO/FO. Nats' right-hander Craig Stammen took over in the top of the 7th and threw a 12-pitch, 1-2-3 frame against the Marlins. After Jayson Werth flew out to end the bottom of the seventh, the Nats had just two hits, both of them by Ankiel against Zambrano, but they were up 1-0 with Tyler Clippard headed out for the top of the eighth.

Ian Desmond couldn't get a hold of the baseball on a one-out grounder to short by pinch hitter Logan Morrison, and Desmond's double-clutch cost him a chance to beat the runner to first with the throw. Adam LaRoche then mishandled a grounder in the next at bat, and settled for an out at first on what could have (potentially) been an inning-ending 3-6-3. Runner on second instead. Emilio Bonifacio fouled off six full-count pitches from Clippard and walked on the 14th pitch of his two-out eighth-inning at bat, but the Nats' right-handed All-Star reliever dialed it up to 94mph and blew Hanley Ramirez away with a 2-2 fastball in the next AB to end a 25-pitch Marlins' eighth, still 1-0 Nationals...

And Rick Ankiel's 3 for 3 after he lines to right and hustles to beat the throw to second for a one-out double in the Nationals' eighth. Ankiel took third on a Jesus Flores groundout and then scored after a walk to pinch hitter Chad Tracy when Ian Desmond lined a one-hopper to Jose Reyes deep in the hole at short and Tracy hustled to second to beat an attempted force. 2-0 Nats. Both runs are Ankiel's. Henry Rodriguez is on for the ninth. Giancarlo Stanton pops up to Ankiel in center. ONE!! Rodriguez lost Gaby Sanchez and walked the Marlins' first baseman with one down, and threw a wild pitch before popping pinch hitter Greg Dobbs up to left. TWO!! John Buck took a 101 mph 3-1 fastball for a called strike before walking with two down, but Henry Rodriguez got a grounder to short and a force at second to end a 2-0 shutout win. 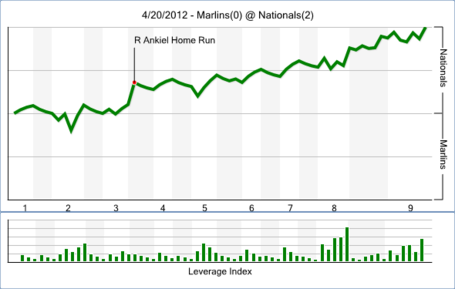