Share All sharing options for: Washington Nationals Win, 3-2 Over Miami Marlins On Ian Desmond's Walk-Off Sac Fly In The 10th.

The Washington Nationals couldn't beat Anibal Sanchez the last time they faced him in late September 2011, but they did beat the then-Florida Marlins with the 28-year-old right-hander on the hill in Sanchez's final start of the year for the Fish, who were 3-0 in the seventh-year pro's starts against the Nats last season before that 9/26 outing. It was Sanchez's fourth start of 2011 against the Marlins' NL East rivals, against whom he'd thrown a combined 15.0 scoreless in his previous two starts, shutting the Nats out in back-to-back games on May 8th in Nats Park and May 14th in Florida after giving up seven hits and two earned runs in a 3-2 Marlins' win over the Nats on April 5th in which he'd received no decision.

In Nats Park, Sanchez was (3-0) with a 0.85 ERA, 10 walks and 29 K's in five starts and 32.2 IP before today. Sanchez took the mound in the first this afternoon after Nats' starter Stephen Strasburg caught Hanley Ramirez looking with an arguably high full-count curve to end an 18-pitch top of the frame and the Marlins' starter threw a quick eight-pitch, seven-strike 1-2-3 bottom of the inning.

Marlins' outfielder Logan Morrison lined a single to center on a 2-0 fastball from Strasburg for a leadoff hit in the top of the second this afternoon. A cruel 3-2 curve got Gaby Sanchez swinging for out no.1. A darting 2-2 change danced away from Greg Dobbs' bat for another swinging K and out no.2 and Morrison got thrown out on 1-2 pitch in the dirt to John Buck. 12 pitches, 2 K's and one caught stealing (or out trying to advance on a WP) get Strasburg through his second scoreless frame of the afternoon. Jayson Werth, who started the day 4 for 27 with 18 K's in his career against Anibal Sanchez, avoided K no.19, grounding out to third for out no. 2 of the Nats' second in Werth's first at bat of the game, and the Marlins' starter struck out Rick Ankiel in the next at bat to complete an 11-pitch 1-2-3 second, setting the first six Nationals down in order.

Stephen Strasburg collected his fourth K in the third, striking the opposing pitcher out with an 81 mph 1-2 bender on the 10th pitch of a quick 1-2-3 inning. Wilson Ramos collected the Nationals' first hit of the day off Anibal Sanchez, singling to left on a 3-2 slider with one down in the bottom of the inning, but Strasburg failed in an attempt to bunt his catcher over, sending one right back to the mound so Sanchez could cut down the lead runner, and the Marlins' right-hander struck Ian Desmond out with a 92 mph 2-2 fastball to complete his third scoreless frame on 33 pitches total, 24 of them strikes.

Marlins' leadoff man Jose Reyes doubled to left on a 97 mph full-count heater, and took third on a sac bunt by Emilio Bonifacio, but a line drive to second on the first pitch to Hanley Ramirez and a fly to left by John Buck stranded Reyes at third as Stephen Strasburg pitched around the leadoff double to finish an 11-pitch top of the fourth that had the right-hander at 54 pitches total after four scoreless innings in Nationals Park. Marlins' right-fielder Greg Dobbs hit a one-out single to right off Stephen Strasburg in Miami's fifth, but the Nats' right-hander struck John Buck out with an 81 mph full-count curve and got a weak grounder to first from Chris Coghlan to end a 17-pitch top of the fifth. 71 pitches total for Strasburg.

The Nats came up empty against Anibal Sanchez in a quick 1-2-3 home-half of the fifth. Another cruel two-strike curve to the opposing pitcher got Stephen Strasburg his sixth K of the day against the Marlins, but Fish leadoff man Jose Reyes sent a chopper over first in the next at bat and took second on Jayson Werth, who fired a wide throw in from right. Strasburg popped Emilio Bonifacio up to left, however, for out no.2, then went to a full count with Hanley Ramirez, just missing two two-strike benders before eventually walking the Marlins' third baseman to put two on with two out for Logan Morrison, who grounded out to short to end a 23-pitch top of the sixth, after which Strasburg was hit for by Roger Bernadina...

Roger Bernadina K'd swinging through an 0-2 fastball to start the Nats' sixth, but Marlins' stater Anibal Sanchez got behind Ian Desmond 2-0 and fed the Nats' shortstop a slider that Desmond crushed, sending a solo HR soaring out to left and half way up the stands for a 1-0 Nationals' lead. Desmond's second HR of the year, and the first of his career vs Sanchez. Ryan Mattheus took over for Strasburg in the top of the seventh, and threw a quick 11-pitch, 1-2-3 inning to preserve the Nationals and Strasburg's 1-0 lead. Anibal Sanchez got behind Jayson Werth 3-1 in the first at bat of the Nationals' seventh and served up another slider that the Nats' right fielder lined to left and just over the wall for his first home run off the Marlins' right-hander in 30 career at bats, and Werth's first of 2012. 2-0 Nats after seven. Werth's 5 for 30 in his career vs Sanchez, and the fifth hit gives the Nats a little wiggle room.

Ryan Mattheus returned in the eighth, giving up an infield single in the first at bat against Chris Coghlan. Giancarlo Stanton ripped a grounder to short, but was robbed by Ian Desmond, who fielded it deep in the hole before spinning and throwing to second where Danny Espinosa picked it like LaRoche for the force. Nats' lefty Sean Burnett took over on the mound with one down and got a groundout to second by Jose Reyes and a fly to left by Emilio Bonifacio to end the 17th scoreless frame in the Nats' first two games of the year with the Marlins.

Brad Lidge started the ninth after the Nationals failed to add to their lead in the bottom of the eighth, and issued a leadoff walk to third baseman Hanley Ramirez. Lidge got behind Logan Morrison in the next at bat too, and threw a 91 mph fastball that ended up in the second deck in right, high above the Nats' bullpen for a two-run HR and a tie game in the top of the frame. After popping Gaby Sanchez up, Lidge issued the second walk of the inning to Greg Dobbs, who was replaced on the basepaths by pinch runner Donnie Murphy, who promptly stole second with John Buck at the plate. Buck popped to left for out no.2 and an intentional walk to Chris Coghlan put two on with two out, but pinch hitter Omar Infante grounded into a force at third to end the top of the ninth with the score tied at 2-2.

Marlins' right-hander Edward Mujica threw a quick 1-2-...and almost three, but Jayson Werth reached second safely on a bloop double to right that dropped in fair between three Fish fielders. An intentional walk to Rick Ankiel brought Xavier Nady up with two on and two out, but the Nats' outfielder grounded back to the mound to send this one to extra innings in Nationals Park. Tom Gorzelanny, who took a beating against the Astros last time out, retired the Marlins in order on eight pitches in the top of the tenth.

Wilson Ramos reached out for an 0-1 slider from the Marlins' Edward Mujica and lined to center for a leadoff single in the Nationals' tenth. Adam LaRoche grounded to first and into a potential 3-6-3, but Marlins' first baseman Gaby Sanchez threw high to shortstop Jose Reyes at second and it bounced off Reyes' glove and into center. Ramos to third on Gaby Sanchez's throwing error... and Ramos tags and scores from third on a sac fly to center by Ian Desmond. 3-2 Nationals on the walk-off sac fly. Lidge off the hook. Nats 12-4. 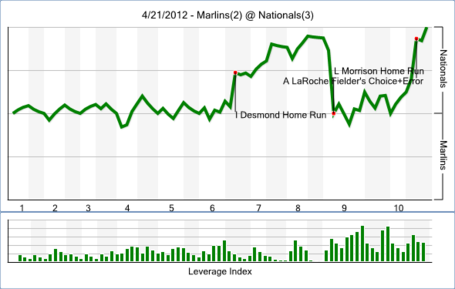