Signed for two years to man first base, Adam LaRoche sure looked like a bust last year. Before his season-ending shoulder surgery in 2011, he struggled with his torn labrum to hit 172/288/258 (58 wRC+) with 3 HRs and a SB in 177 PA. He managed only a .205 batting average on balls in play (BAbip), when his career average BAbip is .311. That is, 50% more of his balls in play should have fallen in for hits--the injury certainly seemed to have weakened his swing, taking away a lot of zip off the bat. Despite the weak contact, he showed encouraging discipline at the plate, walking 14.1% of the time and striking out 20.9% of time, both better than his career averages (9.5% BB, 22.3% K). I saw this as a promising sign for ALR at the time, assuming he could come back healthy in 2012. This season, a healthy ALR has broken out with a 286/375/444 batting line (131 wRC+) in 72 PA with 2 HRs, exceeding even my expectations of league-averageness (a 100ish wRC+). If not for the shoulder injury, should we have expected him to have performance like his H8R-defying numbers so far this year?

(I wrote this before ALR went 3-4 with a walk and a double tonight, so... everything I say below, only more.)

After the jump, a quick look how LaRoche fares through the analytical lens of Fielding Independent Offense!

Many of you have probably heard of Fielding Independent Pitching (FIP). It's an attempt to estimate a pitcher's ERA after you remove the effect of defense. FIP assumes all pitcher skill is wrapped up in a pitcher's ability to strike out batters, avoid walks, and not give up HRs. There are plenty of valid objections to how applicable it is--some pitchers succeed or fail well beyond their K/BB/HR numbers--but it's still an interesting stat. Fielding Independent Offense (FIO) essentially does the same thing for hitters. It estimates their wRC+ (or wOBA) based on how much a batter walks, strikes out, and goes yard. It also includes SBs to account some for speed. The reason FIO is interesting to me, though, is that it allows you adjust a player's BAbip and see how their FIO changes. In other words, if you think a player is lucky/unlucky with his hits, and you can plug that in and see exactly how much it would change their offensive production. In this case, we use career average BAbip to represent "normal" luck.

(Discussion of FIO and some fun FIO-calculating toys here.)

First of all, let's take a look at the 2011 season. Recall that Adam's injured shoulder seemed to have lowered his BAbip to .205. If we plug in his career average BAbip of .311, here's what we see: 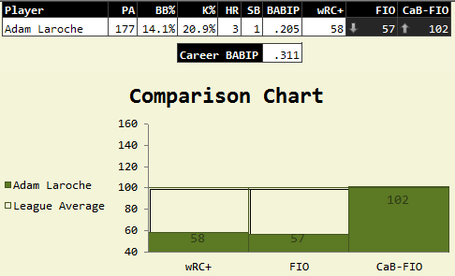 First of all, FIO gives a pretty close estimate of ALR's actual wRC+ (57 vs 58). The interesting part is what happens when we plug in his career-average BAbip and recalculate the FIO (CaB-FIO). His CaB-FIO is a solidly league-average 102! Mind you, he's playing 1B, a premium offensive position. League average for NL 1Bs in 2011 was a 113 wRC+, so he still would have been a below average hitter for a first baseman.

Moving ahead to 2012, the NL average 1B has hit for a paltry 102 wRC+ so far, making ALR's 131 wRC+ look like elite offensive output! However, now we have the opposite concern of 2011: his hitting is based on a .346 BAbip so far this season, which is well above his career average. If his BAbip was injury-lowered in 2011, it may be luck-inflated in 2012. Again, we consult the FIO tool to see by how much: 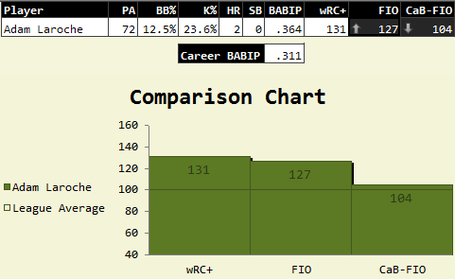 FIO gives a pretty good estimate of his current production (127 FIO vs 131 wRC+). Unfortunately, once we plug in the career-average BAbip, we get a 104 CaB-FIO, right around league average offense. Luckily, NL first basemen as a whole have been league-average with the bat so far this season (instead of being substantially better), so at least LaRoche won't be hurting the team if his apparent good luck at the plate evens out a little bit.

Bottom line: we should have expected a healthy Adam LaRoche to deliver league-average offense based on his power, batting eye, and career BAbip. His current hot streak is better than we should have expected, and it probably won't last. The fundamentals behind his hitting still support league-average output at the plate going forward. And, of course, both the 2012 and 2011 batting stats are SSS, so apply salt to taste.