Share All sharing options for: Washington Nationals Win, 7-2 Over San Diego Padres. Improve To 14-4 In 2012.

• Getting To Know You: 22-year-old San Diego Padres' right-hander Joe Wieland was acquired along with 21-year-old left-hander Robbie Erlin last July in a deadline deal that sent veteran reliever Mike Adams to the Texas Rangers. Weiland spent his 2011 campaign at Class-A and Double-A between the two teams' systems. In 26 games, 25 starts and 155.2 IP, the '08 4th Round pick, identified as a control specialist in every scouting report you read, had a 1.97 ERA, 21 walks (1.21 BB/9) and 150 K's (8.67 K/9). In the top of the first inning this afternoon, Wieland retired the Washington Nationals in order on 15 pitches, 11 of them strikes, getting Chad Tracy looking with a 92 mph 1-2 fastball inside to end a quick 1-2-3 frame. Nats' right-hander Jordan Zimmermann then took over on the hill and threw a 1-2-3 first of his own in Petco Park, retiring the Padres' batters in order on 13 pitches to send San Diego's young starter right back out to the mound...

Wieland left two breaking balls up inside to two left-handers in the top of the second and both of the Nats' batters doubled off the Padres' right-hander. Adam LaRoche ripped a 1-1 curve by Yonder Alonso at first and down the right field line for a leadoff two-bagger, and one out later, after taking third aggressively on a Jayson Werth groundout, LaRoche scored on a Rick Ankiel double to right, with the Nats' veteran outfielder lining a 1-0 curve to San Diego right fielder Jeremy Hermida. Ankiel's fourth double of 2012 makes it 1-0 Nats. Ankiel then took third on a fly to right by Wilson Ramos and after an intentional walk to Roger Bernadina brought the opposing pitcher up, the Nats' center fielder scored from third when the Padres' starter gave up an RBI single to center by Zimmermann, who provided his own run support tonight with the two-out hit. 2-0 Nationals after one and a half.

• New Club Record: Jordan Zimmermann gave up a one-out double by Yonder Alonso in the Padres' second, but he stranded San Diego's first baserunner there two outs later as he got Cameron Maybin and Orlando Hudson to ground and pop out, respectively, ending an 11-pitch frame, which was the 24th consecutive scoreless inning thrown by the Nationals' starters...

• Graceful, Effortless: Adam LaRoche walked with two down in the top of the third, but Jayson Werth flew out to center field, the deepest part of the park to end the top of the frame. Zimmermann made quick work of the Padres in the home half of the frame, striking Padres' catcher John Baker out with a 2-2 curve outside before popping the opposing pitcher up and jamming Will Venable to induce a groundout to second that ended a 12-pitch frame. 25.0 consecutive scoreless by Nats' starter, and Zimmermann's at 36 pitches after three in Petco.

• Why Bunt After His RBI Single?: Zimmermann popped up in front of home on a bunt attempt in the fourth, with Wilson Ramos at second after singling and Roger Bernadina on first after reaching on an error by Padres' shortstop Andy Parrino. San Diego's first baseman Yonder Alonso let it drop, then threw to second for one and on to third to get Ramos and complete a 3-6-5 inning-ending DP. Zimmermann retook the mound, and the 17th pitch of the inning, and 53rd pitch of the night was a 78 mph 3-2 curve that dropped in for a called strike three on the Padres' Jeremy Hermida, ending Zimmermann's fourth scoreless tonight, and the 26th scoreless overall for the Nats' arms.

• Streak Ovah: Nats' shortstop Ian Desmond walked to start the fifth, then went first-to-third™ two outs later when Adam LaRoche singled on a line drive to right for his second hit of the night in three at bats vs the Padres' Joe Wieland. Both runners were stranded, however, when Jayson Werth grounded into a force at second to end the top of the fifth. Jordan Zimmermann was rolling again in the bottom of the inning, retiring the first two batters and recording his fifth K in five innings pitched before he left a 1-1 curve up for Orlando Hudson, who sent his first HR of 2012 and the first HR of the year surrendered by Zimmermann out to right field and into the stands way above Jayson Werth's head to cut the Nationals' lead in half. 2-1 Nats and Zimmermann was up to 66 pitches total after the 13-pitch bottom of the fifth.

• Zimmermann's Done: Pinch hitter Jesus Guzman reached out over the plate to connect with a 1-0 slider from Jordan Zimmermann, and he dumped a single into center for a leadoff hit in the Padres' sixth. Two outs later, Chase Headley snuck a two-out grounder by Danny Espinosa at second to put two on with two out, but Zimmermann threw a 94 mph 1-2 heater by Jeremy Hermida to end a 17-pitch frame and his fourth start of the year.

• More Grace And Effortlesness: Ian Desmond and Danny Espinosa hit back-to-back one-out singles off Padres' reliever Luke Gregerson in the top of the seventh. Padres' lefty Josh Spence took over for Gregorson with two on and one out, immediately walking Mark DeRosa to load the bases for Adam LaRoche, whose third hit of the night gave the Nats a 3-1 lead. LaRoche singled to right to bring Desmond in from third. Jayson Werth, facing the third Padres' pitcher, Micah Owings, took a shot at a 3-0 pitch, but fouled it off before walking with the bases loaded to force in the fourth run. 4-1. Wilson Ramos' two-out opposite field single drove in two more to make it a 6-1 game before Owings escaped the top of the seventh.

• Cheese Does It All: Tom Gorzelanny threw a quick seven-pitch 1-2-3 seventh. Ian Desmond walked with one down and went first-to-third as Danny Espinosa followed with the second of two back-to-back singles for the second inning in a row. Nats' skipper Davey Johnson then decided to leave Gorzelanny in and the reliever came through with an RBI single to right to bring Desmond home and make it a 7-1 game after seven and a half in Petco Park. That's Gorzelanny's 13th career RBI, and his second in two seasons in Washington. Gorzelanny came back out for the eighth, giving up a two-out ground rule double by Will Venable before retiring the Padres without San Diego cutting into the Nats' six-run lead. After the Nats came up empty in the top of the ninth, Gorzelanny came back out, giving up back-to-back one-out hits by pinch hitter Mark Kotsay, who singled, and Yonder Alonso, who doubled, to put runners on second and third with one down. A Cameron Maybin groundout brought in the Padres' second run of the game, but Gorzelanny struck Orlando Hudson out to end the Nats' fourth-straight win. 7-2 final. Sixth-straight series win to start the season...

With a win today, the Nationals are now 14-4... that marks the most wins any Nationals/Expos team has ever had thru 18 games. 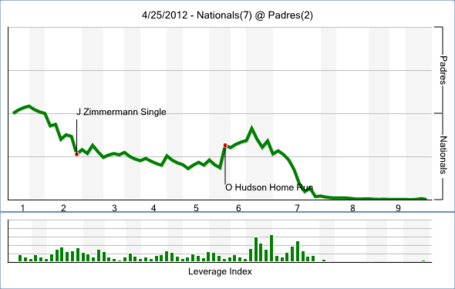