• Countdown To 9:00 PM EDT Tomorrow Begins: Saturday night in Dodgers Stadium it's going to be all about Bryce Harper and the 2010 no.1 overall pick's MLB debut, which Washington Nationals' manager Davey Johnson has already announced will see the 19-year-old outfielder in left field and batting seventh in support of Stephen Strasburg as the Nats take on the Dodgers and LA right-hander Chad Billingsley. Tonight, it was a battle of left-handers with 24-year-old '06 Dodgers' 1st Round pick and 2011 Cy Young Award-winner Clayton Kershaw on the mound for Los Angeles against 26-year-old '07 Nats' 1st Rounder Ross Detwiler. Kershaw started the night up 0-2 on Nationals' leadoff man Ian Desmond, and the LA lefty recorded his first strikeout of the game with a slider in the dirt that got the Nats' shortstop swinging. An error on Juan Uribe put Steve Lombardozzi on with one down, but Jayson Werth and Adam LaRoche both K'd looking at two-strike benders in what ended up being a 16-pitch, 11-strike inning by the Dodgers' left-hander.

• Kemp Can't Be Stopped Or Contained: Ross Detwiler got LA's leadoff man Dee Gordon to chase an 0-2 pitch into the dirt too, throwing a 93 mph sinker outside by the left-handed hitting shortstop. A 3-2 fastball to Mark Ellis got a fly to left for out no.2, but red-hot Matt Kemp singled by a diving Lombardozzi at third with two down to lift his average to a ridiculous .457 (32 for 70) in his 20th game of 2012. Two pitches later, it was a 2-0 game, after Andre Ethier jumped all over an 1-0 slider inside from Detwiler and launched it to right for a two-run blast, Ethier's fifth of the season and his first off a left-hander. 16 pitches, 10 strikes for Detwiler after one.

• Right Side: Danny Espinosa, who was dropped from the two spot to sixth in the order tonight, doubled to center in his first at bat, lining a 94 mph 1-2 fastball to center and sliding in safely ahead of Matt Kemp's throw in to second, but two quick outs later, Clayton Kershaw was through his second scoreless inning on 29 pitches total. A 13-pitch 1-2-3 second had Detwiler at 29 pitches too, but down 2-0 after two innings in Dodger Stadium.

• Cy Kershaw: Clayton Kershaw retired the Nats in order on four pitches in the top of the third, then battled Ross Detwiler for eight pitches at the plate before grounding out to start the bottom of the frame. Two outs later, the Nats' left-hander was through a quick 14-pitch 1-2-3 frame of his own and at 43 pitches total after three innings in LA, having retired seven straight batters after Ethier's two-out blast in the first. Adam LaRoche's one-out single to right in the fourth was the Nats' second hit off the Dodgers' left-hander. Mark DeRosa grounded into a force at second for out no.2 of the fourth, and Danny Espinosa, who doubled in his first at bat, took a 3-1 fastball inside for a strike he didn't like before chasing a full-count slider for an inning-ending swinging K. 5 K's for Kershaw through four.

• 2-out RBI: Matt Kemp singled through short again to start the Dodgers' fourth, (33 for 71) reaching down for an ankle high four-seamer inside and sending it to left for another hit off an astonished Ross Detwiler. Desmond broke for second when Kemp started from first with Andre Ethier up in the next at bat, and Ethier, who homered in the first, singled in the fourth, sneaking a grounder through the hole in back of Desmond to put two on with no one out in the home half of the frame. Jerry Hairston advanced both runners with a sac bunt back to the mound and James Loney grounded weakly to Adam LaRoche at first for out no. 2, but Detwiler gave up a two-out infield single by Juan Uribe that brought Kemp home from third for a 3-0 LA lead after four.

• Dee And James: Dodgers' shortstop Dee Gordon bounced a throw to first that James Loney couldn't handle, putting Jesus Flores on with one down in the Nats' fifth, and Loney returned the favor on the throw to second as the LA first baseman tried to get the force on a bunt attempt by Ross Detwiler but threw one that Gordon couldn't handle for back-to-back E's. Two errors for Los Angeles, but Clayton Kershaw got a fly to right from Ian Desmond and a pop to first by Steve Lombardozzi to end a 14-pitch fifth at 68 pitches total. Ross Detwiler threw a seven-pitch, 1-2-3 fifth in Dodger Stadium, retiring Matt Kemp for the first time in three AB's tonight. But Detwiler and the Nats trailed 3-0 in LA after 5.0.

• Graceful, Effortless, Gone: "Jayson [Werth] always looks like the star of a Passion play," Dodgers' announcer Vin Scully said as Werth walked to start the Nats' sixth. The free pass was the first issued by Clayton Kershaw tonight, and the home run Adam LaRoche hit on an 0-2 slider in the next at bat was the first HR the LA lefty surrendered through 27.1 IP this year. LaRoche's third home run of 2012 made it a 3-2 game in the sixth. Ross Detwiler walked Jerry Hairston, Jr. with one down in the Dodgers' half of the inning, but struck James Loney out and got a force at second on a grounder to short by Juan Uribe to end a 15-pitch sixth. 91 pitches, 58 strikes for the Nats' left-hander, who's done for the night.

• Yeah My Cap's Titled, What?: After a 10-pitch, 1-2-3 seventh for Clayton Kershaw, the Dodgers' lefty was up to 97 pitches and up 3-2 over the Nationals, but he still came up to bat after Nats' lefty Sean Burnett issued a leadoff walk to LA backstop A.J. Ellis. Burnett was aggressive on the sac bunt attempt by the opposing pitcher, however, throwing to second and "just" getting the force to take the lead runner off the basepaths. A second walk to Mark Ellis put two on for Matt Kemp though, and forced Davey Johnson to go to the pen for Ryan Mattheus. 2 on, 2 out. 3-2 game. A wild pitch/passed ball on a curve in the dirt advanced both runners, but a groundout to short kept it close through seven in LA.

• Enough With The Kershaw Already: An infield pop by Lombardozzi. A weak fly to left by Werth. And Clayton Kershaw had two down in the eighth and Adam LaRoche pushed Dodgers' left fielder Jerry Hairston, Jr. back to the track on an inning-ending opposite field flyout. Kershaw was at 113 pitches, 71 strikes after 8.0 IP in which he gave up 3 H, 2 R, 2 ER, 1 BB while recording 6 K's and inducing 11 ground ball outs. 3-2 LA after seven and a half. Ryan Mattheus returned in the bottom of the eighth, giving up a one-out single by Jerry Hairston, Jr., who's replaced on the basepaths by Tony Gwynn, Jr. One out later, Gwynn, Jr. tries to score from first on a Juan Uribe double to right, but the relay throw comes in from Mark DeRosa to Danny Espinosa to Jesus Flores, who blocks the plate and applies the tag. "You're out," yells home plate ump Angel Hernandez. (ed. note - "At least he got this right, but nice strike zone, Angle!") 3-2 game after eight.

• No Luck: Eleven-straight Nationals in a row were set down after LaRoche's HR when LA right-hander Kenley Jansen retired Danny Espinosa on a fly to center for the second out of the Nats' 9th, one pitch after Espinosa came within inches of tying the game on a line drive to right that landed just one seat outside of the RF foul pole. The Nats were down to their last strike when Jansen hit Chad Tracy with a 96 mph 2-2 fastball. Tracy looked hurt. Edwin Jackson came on to run with Jesus Flores at the plate, but Flores K'd swinging through a 96 mph fastball. Ballgame. 3-2 Dodgers win. 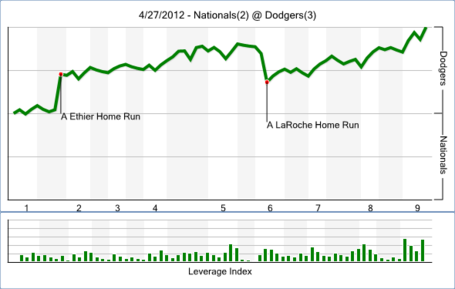 The zone is supposed to be a rectangle, Angel, not, uh, whatever it was you were doing.