• Bryce Harper's Faux-Hawk = Awesome: The Washington Nationals' 19-year-old 2010 no.1 overall pick Bryce Harper's first at bat in the majors took place in the top of the second inning in front of 54,242 fans in Dodger Stadium against LA Dodgers' right-hander Chad Billingsley. The Dodgers' right-hander had two down before the top outfield prospect in baseball stepped up to the plate for the first time in his major league career. Harper took a 91 mph four-seamer for a called strike, took two fastballs outside and then hit a 2-1 fastball back to the mound. Billingsley fielded it cleanly and tossed the ball casually to first baseman James Loney as the Nats' phenom sprinted down the line and emphatically stomped on the first base bag several steps behind the throw but still going full steam. 3 outs. 2.0 scoreless for the Dodgers' right-hander in the second of three for Washington in Los Angeles.

2009 Nats' no.1 overall pick Stephen Strasburg, (who'd thrown an 11-pitch top of the first, giving up a one-out single by his former SDSU coach's son, Tony Gwynn, Jr. before getting the hottest hitter in baseball Matt Kemp. 33 for 74, .446, to ground into an inning-ending 5-4-3 DP), gave up a two-out single by James Loney in the second and then hit Juan Uribe on the elbow with a 97 mph fastball to put two on with two out before striking Dodgers' catcher A.J. Ellis out with an 81 mph 0-2 curve in the dirt after Strasburg had started him back-to-back 96 mph four-seamers. A 19-pitch scoreless second for the Nats' right-hander. 0-0 in LA after two.

• STARE AT IT!!: After Chad Billingsley pitched around a leadoff walk to Wilson Ramos with the help of a diving catch/double play by Jerry Hairston, Jr. at second for outs no. 2 and 3 of the Nationals' third, the Dodgers' pitcher stepped in against Strasburg in the home-half of the frame and got abused by another 81 mph Strasburg bender, which dropped in for a cruel called strike three on the overmatched opposing pitcher. Tony Gwynn, Jr. found a spot in left-center that neither Harper, Ian Desmond or Rick Ankiel could reach for a two-out single that brought Matt Kemp to the plate with one on and two-out, but the Nats' right-hander got the Dodgers' slugger looking at a 97 mph 1-2 fastball outside that was called strike three ending a 16-pitch scoreless third that had Stephen Strasburg at 46 pitches total on the night.

• 1-2-3 and AB No.2: Strasburg got the first out of the fourth with one pitch on which Andre Ethier grounded out to Nats' shortstop Ian Desmond. K no. 5 in 3.2 IP came on a 98 mph 2-2 fastball to Jerry Hairston in the next at bat and a long fly to center off James Loney's bat that Rick Ankiel tracked down ended a nine pitch 1-2-3 bottom of the fourth. Ankiel started the fifth with an eight-pitch at bat that ended on a leadoff single to right for the Nationals' second hit of the game off Chad Billingsley. One-out later, following a Danny Espinosa K, Bryce Harper stepped in for his second MLB at bat, lining a breaking ball foul on the first pitch he saw before flying out to left field on a 2-1 change from the Dodgers' starter, who completes a 20-pitch fifth with 67 pitches total through five scoreless.

• Stras More Hitterish Than Harp Through Six?: Strasburg left an 0-2 pitch up for Dodgers' catcher A.J. Ellis, who jumped on it and lined a one-out single to left in the bottom of the fifth for the fourth hit of the night off the Nats' starter. The Dodgers' starter K'd trying to bunt on a 1-2 curve from Strasburg that he could only foul off, and LA SS Dee Gordon lined a 97 mph 1-2 fastball right back to the Nationals' right-hander on the mound where Strasburg caught the ball with a snap of his glove for out no.3 right back to end a 16-pitch fifth at 71 pitches total on the night. In the top of the sixth, Strasburg collected his first major league double, lining to right-center and all the way to the wall on an 0-1 fastball from Billingsley, but three outs later Strasburg was stranded at third in what was a 0-0 game after five and a half in LA.

• 8 K's, 9 K's: Stephen Strasburg threw a high 97 mph fastball by a swinging Dodgers' slugger Matt Kemp for out no. two of the Dodgers' sixth and the Nats' right-hander's seventh K of the night through 5.2 scoreless. A 1-2 sinker in the dirt got Strasburg K no.8 from Andre Ethier, ending an 11-pitch, 1-2-3 bottom of sixth. 82 pitches, 58 strikes for Strasburg through six scoreless. And Strasburg has a lead five pitches into the seventh when Adam LaRoche launches a 3-1 fastball to right for a line drive HR that just clears the low wall for HR no. 4 on the year and a 1-0 Nationals lead in the seventh.

• 1st MLB HIT!!!: Bryce Harper refused to bite on a first-pitch slider in the dirt, then the 19-year-old took a fastball for a called strike, fouled off a 92 mph four-seamer and took two pitches outside to work the count full in his third at bat. Another foul broke the left-handed hitting slugger's bat, but just like Roy Hobbs he had the Nationals' "Bobby" pick him out a winner and the Nats' preternaturally gifted outfielder took the next pitch for a ride on a line drive double that sailed over Matt Kemp's head and bounced off the base of the center field wall for Bryce Harper's first major league hit. A two-out double to center off Chad Billingsley for Harper. Remember that moment. Harper's stranded at second after Stephen Strasburg K's swinging, but the 2010 no.1 overall pitch gets his first MLB hit out of the way.

• Harper Shows Off Arm: After hitting exactly one batter in his first 117.0 IP, Stephen Strasburg hit his second tonight when he lost an 0-2 fastball inside to Jerry Hairston, Jr. and hit the former National on the wrist for the second HBP of the evening. James Loney reached on a chopper over the mound that Strasburg couldn't reach and Danny Espinosa couldn't field and there were two on with no one out in the bottom of the seventh. E on Espinosa. Juan Uribe K'd chasing a 82 mph 0-2 curve. K no. 9. Strasburg got up 0-2 on A.J. Ellis, but gave up single to left on a 1-2 curve. Hairston rounded second as Bryce Harper charged in and came up throwing, sending a line drive strike to home where Wilson Ramos caught it and applied the ta--- Hairston knocked it out Ramos' hand. "Safe!" says home plate umpire Mark Carlson. Blown call, tie game. But what a throw. 1-1 after seven in Dodger Stadium.

• CLIPPARD!!: Tyler Clippard took over for Stephen Strasburg in the top of the eighth...

The Nats' right-handed reliever thought he had strike three on a check swing by Dodgers' slugger Matt Kemp, but neither the home plate or the first base umpire thought the batter went and Clippard ended up issuing the outfielder a two-out walk. Kemp stole second with Andre Ethier at the plate, but Clippard threw a 2-2 fastball by the Dodgers' right fielder for out no.3 of a scoreless eighth. 1-1 after eight in LA. And Adam LaRoche lines to left for a leadoff single off Dodgers' left-hander Scott Elbert to start the Nationals' ninth.

LaRoche was forced out at second on a poorly executed bunt by Rick Ankiel, but the Nats' center fielder went first-to-third™ in the next at bat when Danny Espinosa lined to left for the second hit of the Nationals' ninth, this one off LA reliever Javy Guerra. That brought Bryce Harper to the plate with runners on first and third and the 19-year-old phenom took the first pitch he got deep enough to left to bring Ankiel in and give the Nationals a 2-1 lead. Harper's first MLB RBI. Danny Espinosa took second on an ill-advised throw home on Harper's sac fly, then scored when Wilson Ramos came through with the third hit of the inning on a single to right, making it a 3-1 Nats' lead after eight and a half...

• Oh Henry!: Henry "Lightining" Rodriguez got the call in the 9th, giving up a leadoff single to right by Mark Ellis on a 99 mph 1-1 fastball in the first at bat. After a wild pitch with James Loney at bat moved Ellis to second, a single moved the runner to third. Runners on the corners, no one out, and Juan Uribe hit a ground-rule double into the left-field stands to get the Dodgers within one at 3-2 with runners on second and third. Still no outs. Rodriguez, who's all over the place, goes to a full count with A.J. Ellis before throwing a 101 mph fastball by the Dodgers catcher. 1 out. Adam Kennedy grounds to first allowing Adam LaRoche to throw home where WIlson Ramos tags Loney. 2 down. And Dee Gordon is quickly down 0-2, when a wild pitch in a 1-2 count allows Juan Uribe to score from third to tie the game at 3-3. Gordon K's swinging, but it's on another pitch in the dirt, and the Dodgers' SS reaches first safely as Adam Kennedy takes third. First and third, two outs. Tom Gorzelanny vs Tony Gwynn, Jr. A lineout to second sends it to extras.

• 11? Really?: After the Nationals come up empty in the top of the 10th, going down in order against Dodgers' right-hander Jamey Wright, Dodgers' slugger Matt Kemp, who was 0 for 3 with a walk, hits his 11th HR on an 92 mph 1-2 fastball that ends up in the center field bleachers. An "MVP!! MVP!!" chant comes from the Dodgers' crowd. Kemp's 11th HR of the year wins it. A walk-off blast sends the Dodgers fans home happy and the Nationals have dropped three-straight on the road. Two losses in a row in LA. Harper ends his MLB debut 1 for 3 w/ a double and an RBI. 4-3 Dodgers final. 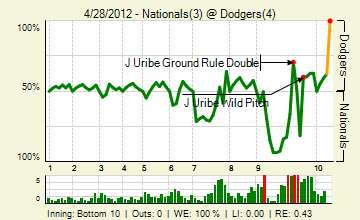