Share All sharing options for: Washington Nationals Shut Out, 2-0, Swept By Los Angeles Dodgers' In LA.

• Moore Debuts: Tyler Moore, D.C. GM Mike Rizzo told MLB Network Radio hosts Jeff Joyce and Jim Bowden this afternoon, is, "... kind of the pride of the minor league system, because [he was] a late-round pick, came to the minor leagues [with] very low expectations and exceeded all of our expectations and is just a testament to what good scouting can do when you get guys in the 16th Round and hand them over to a competent player development system," and a testament to what that player development system, "... can really do to make a player that's good become very good." The 25-year-old '08 16th Round pick, who's hit 31 HR's in each of the last two seasons and already had seven this season in his first year at Triple-A, was the second Washington Nationals' prospect to debut in last two days.

2010 no.1 overall pick Bryce Harper made his debut in left field last night in LA, and today, Moore was inserted in the lineup playing left field about thirty minutes before the game started with Jayson Werth a late-scratch at the Nats' manager's discretion. (ed. note - "No reason but a 'manager's decision' was given to the media before the game.") Moore's first at bat, vs Dodgers' lefty Chris Capuano, came with two down in the top of the second. The right-handed hitting slugger took a breaking ball high on his first major league pitch, fouled off both the 1-0 and 1-1 offerings, and grounded out to third to end the Nationals' half of the frame. 2.0 scoreless, 6 up and down vs Capuano through two.

• 21.0 Scoreless?: At the start of what would be Nats' lefty Gio Gonzalez's 21st scoreless inning in a row on the mound, legendary Dodgers' announce Vin Scully noted that the left-hander had yet to give up a hit in any two-strike count this season, with opposing batters a combined 0 for 42 so far this year against the 26-year-old starter. After Gonzalez gave up a leadoff walk to Tony Gwynn, Jr. on a 3-1 pitch that missed in the first at bat of the Dodgers' first, Gonzalez struck Mark Ellis out for his first K of the day with an 0-2 fastball, 0 for 43, struck Matt Kemp out K no.2 with a high 2-2 fastball, 0 for 44, and struck Andre Ethier out with a 95 mph 1-2 heater (0 for 45) to end the bottom of the first with a walk and three K's on 17 pitches.

• Peter's Son?: Dodgers' SS Justin Sellers went with a 93 mph 1-0 fastball outside and sent a flare to right field for a two-out double off Gio Gonzalez in the Dodgers' second, but a fly to left by Matt Treanor that Tyler Moore handled ended a 10-pitch bottom of the inning for the Nats' left-hander. Nationals' center fielder, Bryce Harper, almost beat out a weak grounder to Juan Uribe in the first at bat of the third, but the hustling 19-year-old arrived a step late. Jesus Flores and Gio Gonzalez followed with a backwards K and a fly to left, respectively, and Dodgers' lefty Chris Capuano was through three scoreless on 41 pitches, 27 of them strikes.

• 23rd Scoreless Frame: Chris Capuano K'd looking at a 94 mph 1-2 fastball (0 for 46), Tony Gwynn popped out to Ian Desmond in short left, and Mark Ellis got down 0-2 to Gio Gonzalez and K'd swinging at a low 94 mph fastball outside that made him victim no. 47 of the year in two-strike counts vs the Nats' left-hander, who was through 3.0 scoreless innings in LA with 5 K's and 39 pitches total after a twelve-pitch frame. Gio's 23rd scoreless inning in a row sets a new franchise record:

• Nice Bunt, Lombo! But WHY!!!: Ian Desmond doubled to left and off the wall for the first hit of the game off Chris Capuano in the top of the fourth. Steve Lombardozzi bunted Desmond over successfullly, but Danny Espinosa struck out for the second time this afternoon and the 27th time in 77 at bats this year for out no.2. Adam LaRoche walked with two down to put runners on the corners for Xavier Nady, but the Nats' outfielder K'd swinging to end Capuano's fourth scoreless inning of the afternoon. Matt Kemp lined a 2-2 pitch back to the mound and off Gio Gonzalez, who recovered and threw low to first for the first out of the Dodgers' fourth. (0 for 48). Gio issued a four-pitch walk to Andre Ethier in the next at bat, then got help from Bryce Harper, who crashed into the wall while catching a fly to center by Juan Uribe, and Adam LaRoche, who gracefully and effortlessly fielded a sharp grounder to first off James Loney's bat to end the bottom of the fourth. 24.0 scoreless for NatGio.

• MOORE!!: Tyler Moore's first career MLB hit came on an 87 mph 1-1 sinker from Chris Capuano that the Nats' left fielder lined to right. Bryce Harper's first Major League K followed when the Dodgers' starter got the 19-year-old slugger to chase an 0-2 slider outside, and after Jesus Flores lined out to short, Gio Gonzalez swung through a 2-2 change that even Vin Scully said as they went to commercial, was "dirty pool." 5.0 scoreless, 8 K's for Capuano, who's at 78 pitches to the 52 Gio Gonzalez starts the fifth with. The Nats' lefty gave up a one-out line drive single to center by Matt Treanor in the bottom of the fifth, but got out no.2 on a sac bunt by Capuano and out no.3 on a fly to left by Tony Gwynn, Jr. to end Gio's 25th scoreless inning in a row after just seven pitches. 0-0 after 5.0.

• 1 for 49 In Two-Strike Counts: After a 14-pitch scoreless 6th by Capuano, the Dodgers' left-hander was at 92 pitches total, with nine K's on the day. Gio Gonzalez popped Mark Ellis up for the first out of LA's sixth, before missing with a 3-1 curve to walk Matt Kemp with one down. Andre Ethier took the fourth free pass of the afternoon to put two on with one out and Juan Uribe took the fifth base on balls as Gio Gonzalez threw eleven straight pitches out of the zone to load the bases on three consecutive walks. Dodgers' first baseman James Loney was behind 1-2 in the next at bat, as Gio finally found the zone, but Loney connected with an 80 mph curve and singled to left-center to break opposing hitter's 0 for 48 slump in two-strike counts vs Gonzalez. 1 for 49 now, and two runs score on Loney's single to make it 2-0 Dodgers. Gio's scoreless inning streak ends at 25.0. Back-to-back K's follow, no.s 6 and 7 for Gio, but the Nats trail by two runs after six innings in LA.

• 1 for 3 w/a Single: Bryce Harper connected with an 0-1 slider from Chris Capuano for a two-out single through the right side of the infield in the top of the seventh. With Jesus Flores up, Dodgers' skipper Don Mattingly made a pitching change in the middle of an at bat, bringing Josh Linblom on in a 2-0 count. The Dodgers' right-hander retired the Nats' catcher on a fly to left, preserving the Dodgers' 2-0 lead through six and a half. Craig Stammen took over on the mound for Gio Gonzalez in the seventh and retired the Dodgers in order on 15 pitches...

• Can Harper Do It?: Josh Lindblom gave up a two-out single by Steve Lombardozzi in the top of the eighth, but Danny Espinosa rolled the third out of the inning to second on a weak grounder to Mark Ellis. 2-0 LA after seven and a half. Craig Stammen gave up a two-out walk to Juan Uribe in the Dodgers' eighth, but popped James Loney up to left to end the home half of the inning. Los Angeles' closer (for now) Kenley Jansen took the ball in the top of the ninth. Adam LaRoche walked on four pitches to start the frame. Jansen started Xavier Nady 2-0 in the next at bat too, before two strikes from the right-hander made it 2-2 and a 94 mph fastball got the Dodgers' reliever his first K. Pinch hitter Chad Tracy K'd swinging through a 92 mph 1-2 cutter and it was up to Bryce Harper, who stepped in with a runner on first and two down in a 2-0 game. Harper took a cutter for ball one, missed another for strike one, fouled off the 1-1 pitch, took two straight fastball low and away and worked the count full... fouled one off...this is getting intense... and took ball four for a two-out walk. Nice AB by Harper. Jesus Flores got behind 1-2 swinging through a 1-1 fastball in the next AB, before striking out on a 2-2 heater from Jansen. Dodgers win, 2-0 final. Nationals drop their fourth straight and get swept on the road in LA. 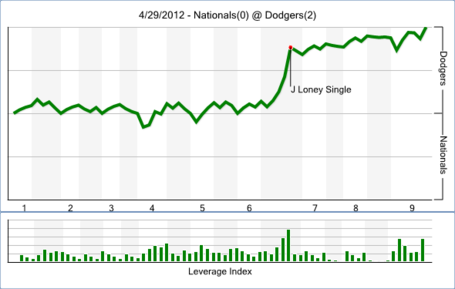