Wrigley Field. Opening Day. The ivy light green in color and just starting to grow on the tangle of vines and down the outfield wall. The Cubs. The official start of the Theo Epstein Era. Bill Murray running the bases, sliding into home and doing his best Kerry Wood impersonation on the mound. Who cares? '09 no.1 overall pick Stephen Strasburg is on the hill in game one of one-sixty-two. The season starts with Nats' leadoff man Ian Desmond lining the first pitch, a sinker, to right for an opposite field single in front of Danny Espinosa, who walks. Ryan Zimmerman got a good idea of the strength of the wind blowing in from center (that would be important) on a long fly that died at the track and fell into Marlon Byrd's glove. Cubs' starter Ryan Dempster got Adam LaRoche swinging with a 2-2 slider in the dirt and Jayson Werth flew to right to end the top of the first of the first game of the year for the 2012 Washington Nationals.

Stephen Strasburg got a fly to center field from Cubs' leadoff man David DeJesus with a 95 mph 0-1 fastball for the first out of the season recorded by the 23-year-old right-hander. Darwin Barney grounded weakly to second on the first pitch he saw from Strasburg, and the Nats' starter had out no. 3 when he popped Starlin Castro up over the mound, but Strasburg cleared out of the infield quickly and watched as the ball fell between a charging Zimmerman and LaRoche. No worries, however, the stiff wind is helping both pitchers as the Wrigley faithful rise on a fly to center by Alfonso Soriano that dies at the wall and falls into Roger Bernadina's glove. [CHOMP!]. 7 pitches, 5 strikes for Strasburg in the first. 0-0 after one...

A filthy, tight 1-2 bender outside got Cubs' center fielder Marlon Byrd swinging to end a seven-pitch 1-2-3 second for Strasburg after the Nationals went down in order in the top of the frame. An error by Cubs' third baseman Ian Stewart on an Ian Desmond grounder to third and the second walk in two at bats for Danny Espinosa brought Ryan Zimmerman's up again with two runners on in front of him in the third, but Zim walked too, loading the bases with one down. Adam LaRoche then K'd swinging for the second time today and the 7th time in 15 career at bats vs Dempster and Jayson Werth flew out to right, as the Nationals left the bases loaded. 0-0 after two and a half. Strasburg gives up a two-out single on a first pitch fastball to David DeJesus, but the Nats' right-hander gets through his third scoreless on 12 pitches to leave him at 26 total after 3.0.

Alfonso Soriano singled by a diving Ian Desmond and into center for a one-out hit off Strasburg in the Cubs' fourth, and Wilson Ramos threw away an ill-advised aggressive throw to second trying to cut down the lead runner on a swinging bunt by Ian Stewart, but the Nats' 24-year-old backstop made up for the error by throwing Soriano out at third when the Cubs' outfielder got greedy and tried to steal a bag. Great pick and tag on a low throw by Zimmerman. Two down, but Strasburg issues the first walk of the game to Jeff Baker, moving Stewart into scoring position and Marlon Byrd comes through with a two-out RBI single to left that brings the runner in from second for the first run of the game and 1-0 Cubs' lead after four innings in Wrigley.

10-pitch, 1-2-3 fifth for the #Cubs' Ryan Dempster, who's at 71 pitches after 5.0 scoreless in which he's given up just one hit and three walks. Strasburg brought the breaking balls and the change out in the 5th though, after throwing predominantly fastballs early in the game. [ed. note - "SI.com's Jerry Crasnick on Twitter (@JCrasnick): "By my count, Strasburg has thrown 22 FB and 4 curves in three innings. He brought the cheese today."] The right-hander need just 15 pitches to retire the Cubs in order in the 5th, striking out Dempster with a curve, DeJesus with a change and getting a weak lineout to short from Darwin Barney to end a quick 1-2-3 bottom of the fifth. After another 1-2-3 frame by Dempster in which LaRoche K'd for the third time in 3 AB's today, and the 8th time in 16 career AB's vs Dempster, Strasburg was back on the mound in the 6th. A 98 mph 1-2 fastball upstairs gets Starlin Castro swinging. An 96 mph 0-1 two-seamer gets a fly to right from Soriano after a knee-buckling 79 mph curve had the Cubs' OF ducking for cover, and a diving 90 mph 1-2 change outside gets Ian Stewart chasing to end a 10-pitch 1-2-3 6th for Stras.

Ian Desmond committed his first throwing error of the year on a grounder to short off Jeff Baker's bat in the bottom of the 7th putting the leadoff runner on against Strasburg, who started the inning at 70 pitches. A 5-4-3 DP and a fly to left-center later the Nats' starter is through 8.0 IP on 82 pitches. And Stephen Strasburg's done after 12-pitch 7th.

Ian Desmond singled with one down, but Ryan Dempster struck Danny Espinosa out before the Cubs' starter was lifted after 7.2 IP, 2 H, 0 R, 0 ER, 3 BB, 10 K's, 108 P, 73 S. Dempster's out in favor of Kerry Wood, who walks Ryan Zimmerman (after Ian Desmond stole second) and throws a wild pitch to move both runners into scoring position with Adam LaRoche at the plate. Another walk loads the bases for Jayson Werth, who's 0 for 7 in his career vs Wood. He's still 0 for 7, but Werth earns a walk after starting down 0-2, taking a real close 0-2 pitch and battling back to a full count. Bases loaded walk by Wood and it's a 1-1 game after 8.0 in Chicago.

Cubs' outfielder David DeJesus reached first safely on the second error of the game by the Nationals, this one by Nats' second baseman Danny Espinosa, but right-handed reliever Tyler Clippard popped Darwin Barney up and got a weak groundout to first from Starlin Castro to end a scoreless eighth. Cubs' reliever Carlos Marmol retired the first two batters he faced in the ninth before bench bat Chad Tracy bounced a two-out double off the right field wall and his pinch runner, Brett Carroll, came around to score on Ian Desmond's third hit of the game. RBI single for Desmond and a 2-1 Nats after eight when Brad Lidge comes on in the 9th.

A brutal 0-2 slider gets Reed Johnson swinging, but Ian Stewart crushes a 1-0 fastball, sending a towering fly to right and off the brick wall. Werth throws it in, but Stewart's already at third. Pinch runner Joe Mather replaces Stewart at third, and gets thrown out at home running on contact on a grounder to third by Jeff Baker. Zimmerman fields, fires home, Wilson Ramos catches it and tags Mather. "You'rrrrre OUT!" Two down. Lidge gets Marlon Byrd looking with a full-count fastball. Called strike 3. Nats win, 2-1 final. 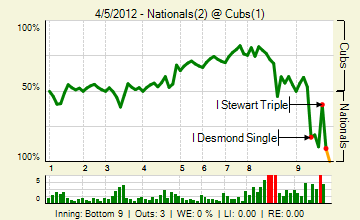