Nats' shortstop Ian Desmond started today's game with a leadoff double, but three outs later he was still standing at second when Jeff Samardzija completed a 13-pitch 1st in the finale of the Washington Nationals and Chicago Cubs' season-opening three-game series in Wrigley Field. 25-year-old Nationals' right-hander Jordan Zimmermann's 2012 campaigned started with a 94 mph fastball for a called strike to Cubs' leadoff man David DeJesus. One pitch and one line drive to third later, Jordan Zimmermann had the first out of the year. Two pitches and one groundout to short by Darwin Barney later, Zimmermann had two quick outs. Zimmermann then got up 0-2 on Chicago shortstop Starlin Castro, and got a fly to right with a 96 mph 1-2 fastball outside to complete a nine-pitch, eight strike 1-2-3 inning in Wrigley Field.

Jayson Werth K'd swinging through an 86 mph 2-2 slider from Jeff Samardzija for the first out of a 13-pitch 1-2-3 second by the Cubs' starter. That's 0 for 8 with 5 K's for Werth to start the second year of his 7-year/$126M dollar deal in D.C. Zimmermann returned to the mound and got Alfonso Soriano (the pitcher whose departure gave the Nats the draft pick they used to select Zimmermann in the 2nd Round of the '07 Draft) to fly out to center on the first pitch of what ends up being a five-pitch, 1-2-3 second for the Nats' right-hander, who's at 14 pitches, 11 of them strikes after two scoreless frame vs the Cubs.

Zimmermann got a groundout to first on the first pitch he threw to Marlon Byrd in the third. That's four outs on six pitches for anyone counting. Backup Cubs' backstop Steve Clevenger sliced a single over short on a 92 mph 1-2 fastball for the first hit off Zimmermann with one down in the third, but two quick outs later, the Nats' starter was through his third scoreless frame on just 25 pitches after an 11-pitch inning in Chicago's Wrigley Field. Jeff Samardzija retired the Nats' in order in the top of the fourth to set 12 batters in a row down after Ian Desmond's leadoff double in the first.

Zimmermann took a comebacker off Darwin Barney's bat off the thigh, but made the play, throwing to Adam LaRoche for the first out of the Cubs' fourth before Starlin Castro singled up the middle for Chicago's second hit of the game. A passed ball with Castro running allowed the infielder to take third and a sac fly to left by Soriano brought him home to give the Cubs a 1-0 lead over Zimmermann and the Nats after four. Zimmermann was at 39 pitches after a 14-pitch fourth. Eight pitches later, Jeff Samardzija was through his fifth scoreless frame, with 15 in a row set down and Jordan Zimmermann was back on the mound.

The Nats' starter surrendered a leadoff double by Cubs' first baseman Bryan LaHair on the first pitch of the fifth and a groundout to second by Marlon Byrd moved the runner to third, but five pitches, a sharp lineout to short and a swinging K later Zimmermann was through a seven-pitch scoreless fifth without the runner scoring. [ed. note - "You read that correctly."] 46 pitches for Zimmermann through five innings. Wilson Ramos started the Nats' sixth with a single to right and after a sac bunt by Zimmermann, the Nats' backstop took third on the Nats' third hit, an Ian Desmond single to right, before scoring on a sac fly to right field by Danny Espinosa that tied things up. 1-1 game after five and a half.

Darwin Barney was fooled by a 1-1 slider from Jordan Zimmermann, but made contact and lined it to left for a one-out double in the Cubs' sixth. A diving play by Roger Bernadina [CHOMP!] on a sure-thing double off Starlin Castro's bat got Zimmermann his second out of the inning, but Alfonso Soriano reached down for a low 1-2 slider and singled to left to bring Barney in for the go-ahead run, making it 2-1 Chicago after six. Zimmermann got Cubs' third baseman Ian Stewart swinging on three pitches in the next at bat and he was at 61 pitches total after a 15-pitch frame.

After a 13-pitch 7th for the Cubs' Jeff Samardzija left him at 78 pitches after 7.0 IP in which he'd allowed just three hits and 1 ER while walking no one and striking out six, Jordan Zimmermann gave up a leadoff double by Bryan LaHair on a full-count slider to the Cubs' first baseman in the bottom half of the inning. Zimmermann then popped up Marlon Byrd as the Cubs' outfielder tried to bunt, struck catcher Steve Clevenger out with a 93 mph 0-2 fastball, and popped the opposing pitcher up to second for the final out of a 19-pitch frame that had him at 80 pitches total after seven innings in Chicago. Chad Tracy hits for Zimmermann in the eighth, but no heroics from Tracy today.

Ryan Mattheus took over for Jordan Zimmermann in the eighth, and today it was the Nats' bullpen that let things get out of hand. A leadoff walk to David DeJesus and a one-out RBI double to left by Starlin Castro quickly made it a 3-1 game and a stolen base and an intentional walk later there were runners on the corners when the right-handed reliever was lifted for lefty Sean Burnett. An Ian Stewart single in the lefty vs lefty matchup brought Castro home to make it 4-1 Chicago. Jeff Samardzija came back out for the 9th and retired Desmond, Espinosa for the first two outs before a two-out error by Starlin Castro at short extended the inning by putting Ryan Zimmerman on. Cubs' manager Dale Sveum came out to talk to his pitcher, but left him in to face Adam LaRoche, who took a 97 mph 2-2 fastball deeeeep to right and way out of there!! 4-3 game. Samardzija's done. Carlos Marmol vs Jayson Werth. The two-out walk put the tying run on, but Xavier Nady popped up foul of third to end it. 4-3 Cubs win. Nats take two of three from Chicago to start the season. Final score, 4-3 Cubs. 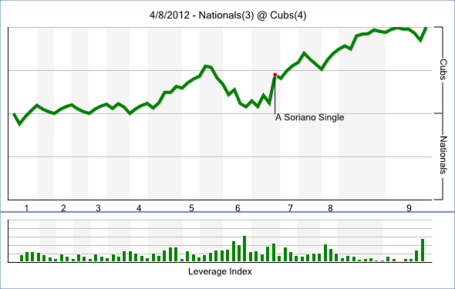