For a moment in the first, you had to imagine this is exactly how the Washington Nationals' front office planned it when constructing the Nats' roster. First Ian Desmond worked the count full, and though he K'd looking on the sixth pitch of the AB, he showed the rest of the Nationals' batters what New York Mets' right-hander Mike Pelfrey had tonight and three singles followed with Danny Espinosa, Ryan Zimmerman and Adam LaRoche connecting for consecutive hits. Espinosa went first-to-third™, running as Zimmerman singled through second, and the Nats' second baseman scored when LaRoche lined to right to put the Nats up 1-0 early. With two on and one out, Jayson Werth, who's hitless in his first 10 at bats this season coming into the game, struck out swinging to end the top of the first, for his sixth K in the first eleven trips to the plate this year. Mark DeRosa then grounded to short to strand two and let the Mets' starter off the hook.

New Nats' starter Edwin Jackson walked Ruben Tejada in E-Jax' first at bat as a Nats' pitcher after signing a 1-year/$11M dollar deal this winter, and he gave up a single to center by Daniel Murphy that rolled under his glove, over the mound and up the middle to put two on with one out before the 28-year-old right-hander settled in to strike out two of the next three batters in what ended up being an 18-pitch scoreless first...

Jackson and Pelfrey both threw scoreless seconds, retiring each side in order, but the Nats struck again in the top of the third with Ian Desmond singling up the middle on a 1-0 slider. Pelfrey got Danny Espinosa swinging, collecting his fifth K in three innings, but Ryan Zimmerman doubled to right, one hop and off the wall to bring Desmond in and make it a 2-0 game. Adam LaRoche then brought Zim around with an RBI single to left that made it 3-0 Nationals. LaRoche could have scored too if he hadn't been thrown out (according to the ump at least) trying to stretch the RBI single into a two-base hit, since Jayson Werth finally got into the act, tripling on a one-hopper off the wall in right-center for his first hit in 12 2012 AB's. Instead Werth was stranded at third when DeRosa's ground out ended the Nats' third and the Mets got on the board in the bottom of the inning with Mike Pelfrey doubling to left, aggressively tagging up and taking third on a fly to center and scoring on an RBI single by David Wright. E-Jax was at 48 pitches after three with the Nats' up 3-1.

After the Nats came up empty in the top of the fourth, Edwin Jackson got the first two outs of the Mets' half of the inning on six pitches, then gave up a four-pitch, two-out walk to Mets' catcher Josh Thole that immediately came back to haunt the right-hander when Mets' outfielder Kirk Nieuwenhuis connected on a 2-2 slider and drove it out to right and over the new outfield walls for a game-tying, two-out, two-run blast. 3-3 game and Edwin Jackson's at 63 pitches, 36 of them strikes with two and four K's in 4.0 IP. Mike Pelfrey walked Adam LaRoche with two down in the top of the fifth, but the Nats failed to take advantage of the two-out walk the Mets gave them with Jayson Werth striking out for the seventh time in 13 at bats.

An error by Adam LaRoche (his first since 2010) on a one-out grounder to first by Danny Murphy put a runner on against Edwin Jackson in the Mets' sixth, but the Nationals' starter struck David Wright out for his sixth K in 5.0 IP, and Jesus Flores threw Murphy out to erase the runner who reached on the E and help his pitcher out of trouble. E-Jax at 78 pitches after five innings in Citi Field. Jesus Flores and Xavier Nady (who hit for E-Jax) hit back-to-back two-out singles in the sixth to chase Mike Pelfrey in favor of right-handed reliever Miguel Batista, who got Ian Desmond swinging to strand two runners.

• Secret Thoughts of a Mets Fan: [ed. note - "I took in the game with a Mets fan friend. Here's what he had say about Mike Pelfrey when he was lifted, "It's so horrible. He was our Opening Day starter last year. I can't even begin to tell you how it wrenched my guts last year that he was our Opening Day start-- TURN THAT OFF!!" At that point he angrily grabbed for the recorder. I tried."]

Nats' lefty Tom Gorzelanny issued one and two-out walks in the Mets' sixth, but Kirk Nieuwenhuis lined out to short to end a 17-pitch frame by the Nats' reliever. Miguel Batista walked the first two batters he faced in the seventh before he was lifted in favor of Ramon Ramirez, who got a fly to left from Adam LaRoche and an inning-ending 6-4-3 DP off Jayson Werth's bat to leave the Nats' right fielder 1 for 14 on the year after four at bats tonight.

Tom Gorzelanny pitched around a one-out double in the Mets' seventh, but when he gave up a two-out double by Mets' catcher Josh Thole in his third inning of work in the eighth, Davey Johnson turned to right-hander Henry Rodriguez and Mets' manager Terry Collins went with pinch hitter Scott Hairston with a runner on second and two down in a tie game. 3-3. The Nats' hard-throwing right-hander got up 1-2 on the veteran outfielder and dropped a filthy two-strike slider on the unsuspecting Hairston who K'd swinging and wasn't even close. 97 mph fastball outside, followed by an 81 mph drops-off-the-table slider. Filthy.

Rodriguez came back out for the ninth after the Nats failed to score on former Nationals' reliever Jon Rauch. Steve Lombardozzi took a leadoff walk, but Ian Desmond failed to get the bunt down, bunting back to the mound and into a force at second. Danny Espinosa then K'd swinging and Ryan Zimmerman grounded out to second to strand the leadoff runner. The Mets got it right. Henry Rodriguez issued a leadoff walk to pinch hitter Mike Baxter then threw low to first handcuffing a covering Danny Espinosa on a sac bunt attempt by Ruben Tejada. The baseball went so far by first into foul territory that Baxter could have scored on the play, but he fell rounding third and had to turn back. That set Mets' second baseman Danny Murphy up with runners on first and third with one down and he connected on 96 mph 1-0 fastball, sending a line drive single to right for a walk-off single. 4-3 Mets win. 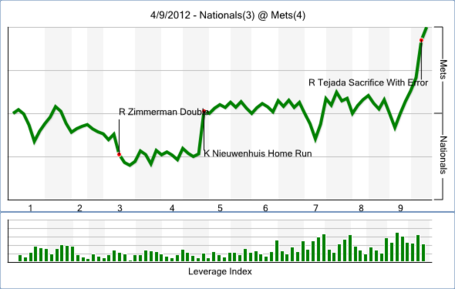