By Patrick Reddington@federalbaseball Updated May 2, 2012, 9:39am EDT

• Zimmermann vs Cahill: A groundout to second that Danny Espinosa handled. A grounder back to the mound, a kick save by the pitcher and a ricochet to short where Ian Desmond played it with ease and a 3-2 slider outside for a called strike three. It took Washington Nationals' right-hander Jordan Zimmermann 17 pitches to retire the Arizona Diamondbacks' batters in order in the top of the first. D-Backs' right-hander Trevor Cahill gave up a one-out line drive single to right by Steve Lombardozzi, but needed just nine pitches to get out of a scoreless home half of the opening inning.

Zimmermann missed his spot with a 1-1 fastball to D-Backs' outfielder Jason Kubel, giving up a leadoff double to left in the top of the second, then the Nats' right-hander just missed with a 2-2 curve outside to Miguel Montero, before dialing it up to 95 to get a swinging K with a full-count heater to the Diamondbacks' catcher. Paul Goldschmidt lined a single to left on an 0-1 fastball to put runners on first and third with one down in Arizona's second, but Washington's '07 2nd Round pick dropped an 0-2 slider on Cody Ransom for K no.3 of the game and got a line drive to right from John McDonald to end a 17-pitch second in the nation's capital...

• WereWalk: Jayson Werth walked to start the Nats' second and Trevor Cahill balked the runner over with Danny Espinosa at the plate, but Espinosa struck out for the 28th time in 78 at bats, bringing 19-year-old Bryce Harper to the plate and the Nationals Park crowd of 22,675 to its feet as the 2010 no.1 overall pick stepped in for the first home AB of his career. The left-handed hitting outfielder K'd chasing a 1-2 change in the dirt in an AB which saw the D-Backs' starter throw three changeups and one sinker to the rookie and Nats' 24-year-old catcher Wilson Ramos K'd too as Cahill completed his second scoreless frame in Nationals Park. Jordan Zimmermann retook the hill in the third and threw a 13-pitch, 1-2-3 top of the inning which had him at 47 pitches, 35 of them strikes through three scoreless frames. 10 pitches and three outs later, the Nats' starter was back on the mound.

• E:6, No.3: A 78 mph 1-2 curve in the dirt got D-Backs' C Miguel Montero swinging to end an 11-pitch 1-2-3 fourth for Jordan Zimmermann, who collected four K's through four scoreless. Jayson Werth singled through short for the Nationals' second hit of the night off Arizona's starter, but Danny Espinosa grounded out weakly to Aaron Hill to end Trevor Cahill's fourth scoreless inning in Nationals Park. Ian Desmond backhanded a sharp grounder deep in the hole at short off Paul Goldschmidt's bat, but skipped the throw to first and by Adam LaRoche to put the leadoff runner on second in the D-Backs' 5th. E:6, Desmond's third. An 85 mph full-count slider from Zimmermann caught Cody Ransom looking for the the first out of the inning, but a one-out single to left by John McDonald scored Goldschmidt from second to give Arizona a 1-0 lead after four and a half.

• 0 for 2 For Harp: Bryce Harper worked the count full and hit a sharp grounder back up the middle, through Cahill's legs and over the mound but right to D-Backs' shortstop John McDonald behind second for the first out of what ends up an 11-pitch, 1-2-3 5th by the Diamondbacks' big right-hander Trevor Cahill. Justin Upton started Arizona's sixth with a soft liner to center for a single, and Upton then stole second one out later after a backwards K on Jason Kubel before scoring on an RBI double to right-center by Miguel Montero that made it a 2-0 game. The 14th SB in 15 attempts against Wilson Ramos this season sets up the RBI double, though he would have scored from first without much problem. Ian Desmond and Steve Lombardozzi singled in succession to start the Nats' 6th, but a DP grounder by Rick Ankiel and a weak groundout by LaRoche help Trevor Cahill through six scoreless on 70 pitches.

• Bryce Harper Is The NEW ARM?!?!: Cody Ransom and John McDonald hit back-to-back singles to start the seventh, and only a diving play by Jordan Zimmermann on a bunt by Cahill kept the opposing pitcher from reaching safely on what was a well-placed sacrifice toward third. An intentional walk to Gerardo Parra loaded the bases and set up a potential DP at which point Davey Johnson turned to sinker-balling reliever Ryan Mattheus with Aaron Hill up, but the Nats' right-hander hit the D-Backs' second baseman to force in a run and make it 3-0 Arizona. Justin Upton flew to left in the next at bat for what should have been an easy sac fly, but Bryce Harper uncorked his second awe-inspiring throw in three games, almost cutting John McDonald down at home, hitting Wilson Ramos on a fly from the middle of the left field grass on a throw that had no business being even close. Upon further review the ump blew the call, but it's still 4-0 D-Backs after six and a half.

• Shark Attack: Harper worked the count full before grounding out to first to end Trevor Cahill's seventh scoreless and the Nationals' 17th inning in a row without a run. 7.0 IP, 4 H, 0 R, 0 ER, 1 BB, 5 K's for the D-Backs' right-hander through seven. Ryan Mattheus loaded the bases with one down in the D-Backs' eighth, but got an inning-ending DP to hold the D-Backs lead at 4-0 and the Nationals finally scored a run in the home-half of the frame when Roger "The Shark" Bernadina doubled to right and scored from second on an RBI single by Ian Desmond. The run ends the Nats' scoreless innings streak at 17.0, but they still trail 4-1 when Trevor Cahill's lifted for right-hander Bryan Shaw. Gerardo Parra singled and stole second in the D-Backs' 9th, the 15th SB in 16 attempts against Wilson Ramos this season. Parra scored one out later on a single to center by Justin Upton and the D-Backs led 5-1 after eight and half in the nation's capital.

D-Backs' right-hander David Hernandez retired the Nationals in order in the ninth and the Nationals dropped their fifth straight, 5-1 final. Bryce Harper ends his home debut 0 for 3 with a K, but wows the crowd with another throw from left field...So there's that at least. 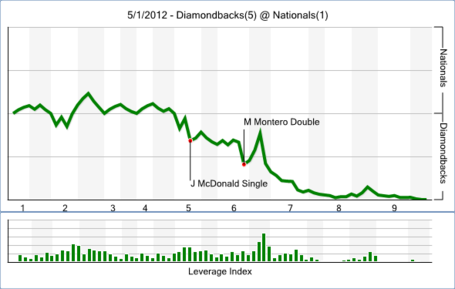