• 1st Rounders: Washington Nationals' 05 1st Round pick Ryan Zimmerman took a 2-2 fastball from Pittsburgh Pirates' right-hander Kevin Correia back up the middle for a two-out line drive single to center that extended the Bucs' starter's first innning of work just a little after he'd started tonight's game by retiring Ian Desmond and Roger Bernadina on just three pitches. Zimmerman was stranded at first one pitch and one out later, however, on a groundout to second by Adam LaRoche, which brought '09 no.1 overall pick Stephen Strasburg out to the mound in PNC Park for the first inning of his seventh start of the 2012 campaign and his second career start against the Pirates following his 14 K MLB debut back in June of 2010. Strasburg gave up a leadoff single on the first pitch he threw to Pittsburgh right fielder Jose Tabata, but quickly erased that runner with a 6-4-3 DP off Alex Presley's bat, before finishing up the bottom of the inning by throwing a 97 mph 2-2 fastball by Pirates' CF Andrew McCutchen for a swinging K to end a 10-pitch opening frame...

• Espinosa Wants To Play, But...: The Nationals got a one-out single from much-maligned second baseman Danny Espinosa in the top of the second, but the 25-year-old infielder was then quickly caught stealing by Bucs' backstop Michael McKenry for the second out of the inning. The 3rd CS in four attempts by Espinosa this season. One pitch from Kevin Correia later Rick Ankiel K'd swinging to end a 12-pitch inning by the Pirates' right-hander. Nats' right-hander Stephen Strasburg needed just 11 pitches to strike out the side in the bottom of the inning, collecting his second, third and fourth-straight K's in a quick 1-2-3 frame.

• 5-6-7 To Tie A Franchise Mark: Strasburg got hit with a changeup inside from Correia in his first AB of the night, but he was stranded at first two outs later as the Pirates' right-hander completed a 12-pitch third. 33 pitches total through three scoreless for the Bucs' starter. A low 97 mph 2-2 fastball got Clint Barmes looking for Stephen Strasburg's fifth-straight K in the bottom of the third. A 98 mph 2-2 fastball got Pirates' catcher Michael McKenry swinging for K no. 6 and a cruel 1-2 bender to the opposing pitcher got the Nats' right-hander his seventh-straight strikeout and his third scoreless frame on 36 pitches...

• No, Danny! No!: Danny Espinosa came up with two on and one out in the top of the fourth, after a walk to Adam LaRoche and a one-out opposite field single by Bryce Harper, but Espinosa grounded into an inning-ending 4-6-3 DP to help the Pirates' starter Kevin Correia complete his fourth scoreless frame on 43 pitches. Jose Tabata, who singled off Strasburg for a leadoff hit on the first pitch of the bottom of the first, was first-pitch swinging when he stepped up to the plate in the bottom of the fourth and the Pirates' outfielder snapped the Nats' right-hander's streak of seven-straight strikeouts with another leadoff hit, after which he moved to second on a sac bunt and scored on an RBI single to right by Andrew McCutchen. 1-0 Pirates just like that. One out later, Bucs' second baseman Neil Walker hit a 96 mph two-strike fastball to center to bring McCutchen in and make it 2-0 Pirates over the Nats after four innings in PNC Park.

• 9-10-11: After a 19-pitch bottom of the fourth vs the Pirates, and after connecting for a two-out opposite field double, his third in the last three starts, Stephen Strasburg collected his ninth K of the night, getting Bucs' first baseman Garrett Jones to chase an 81 mph 1-2 bender into the dirt for another swinging K. A 90 mph 2-2 two-seamer in the dirt got Clint Barmes chasing for K no.10, but a two-out double to right by Pirates' catcher Michael McKenry delayed the inevitable until three pitches later when Strasburg got the opposing pitcher swinging with an 0-2 curve for K no.11 to end a 17-pitch bottom of the fifth by the Nats' right-hander.

• #Shark, #Shark, #Shark!: Roger "The Shark" Bernadina took Pirates' RHP Kevin Correia deep to center field for a 400ft+ solo HR to get the Nationals on the board in the top of the sixth. 2-1 Pirates. Bernadina's first HR of the year was followed by a Ryan Zimmerman walk and a two-run blast to center by Adam LaRoche, whose sixth home run of the year turned things around in a hurry, giving the Nationals a 3-2 lead before an out was recorded in the top of the sixth. Given a lead to work with, Stephen Strasburg retook the mound in the sixth and the Nats' right-hander got a weak groundout to short from Jose Tabata with a 1-0 curve and his 12th K of the night with a 96 mph full-count fastball that Alex Presley watched all the way in. With two down, however, Strasburg issued back-to-back-to-back two-out walks to Andrew McCutchen, Pedro Alvarez and Neil Walker to load the bases before striking Pirates' first baseman Garret Jones out for the third time in three at bats tonight. K no.13 for Strasburg in 6.0 IP. 27 K's in two starts vs the Bucs. That was it for Stras tonight...

• To The Pen: Right-hander Ryan Mattheus retired the Pirates in order in a 16-pitch, 1-2-3 7th, after which Adam LaRoche collected his seventh double of the year on an opposite-field two-bagger off Pittsburgh's left-handed reliever Tony Watson, but that was all the offense the Nationals' managed in the top of the eighth. Tyler Clippard took over on the mound in the bottom of the inning, retiring the Pirates in order in a 12-pitch, 8 strike, 1-2-3 frame after which Rick Ankiel gave the Nats some insurance with a solo HR (his 2nd) off Pirates' right-hander Chris Resop in the top of the ninth.

Nationals' closer Henry Rodriguez came on to close it and got a fly to center from Pedro Alvarez, but after he got Neil Walker swinging on a 2-2 fastball in the dirt, an error at first (on a close call) put a runner on with one down in a two-run game. Garret Jones flew to right-center for out no.2 though, and pinch hitter Casey McGehee grounded out to second as the Nationals snapped a three-game losing streak and salvaged one game of the three-game series against the Pirates in PNC Park. Strasburg gets the win, (3-0), Henry Rodriguez gets the save, (no.7). 4-2 final in Pittsburgh and the Nats now head to Cincinnati for a three-game set with the Reds. 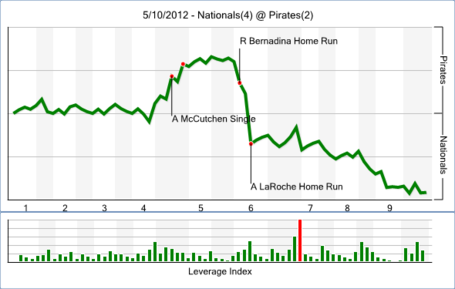 *Ankiel didn't try to bunt before going yard, but ALR and Shark did.