• Gio Gonzalez In Ohio: 26-year-old Washington Nationals' lefty Gio Gonzalez shut the Cincinnati Reds out for seven innings, holding them to two hits while striking out seven, when he faced the NL Central's Ohio-based franchise in the 2012 home opener in the nation's capital back on April 12th. It was the former Oakland A's starter's second start with the Nats (after a shaky 3.2 inning debut against the Chicago Cubs in Wrigley Field in the season's second game), and the beginning of a streak of 25.0 scoreless innings on the mound which lasted through four starts from April 12th's outing against the Reds until the sixth inning of an April 29th game against the LA Dodgers. Gonzalez has made one start since then, against Philadelphia this past weekend, and he was once again sharp in that outing, holding the Phillies to one run on four hits over 7.0 innings pitched in which he walked one and struck out seven.

The Nats' left-hander took the mound tonight with a 3-0 lead following a Roger Bernadina two-run home run (to end a 10-pitch AB) and an Adam LaRoche RBI double (on a 3-0 pitch from the Reds' Mike Leake) in the top of the first. Gonzalez retired the first two Reds' batters on nine pitches (with the help of a strong backhand play and throw from short by Ian Desmond that Adam LaRoche scooped) before walking Joey Votto with two down to give the Reds their first baserunner of the night. A slick backhand play and glove toss by Danny Espinosa to Ian Desmond at second for the force on a grounder up the middle by Brandon Phillips got Gonzalez out of the first, however, negating that two-out walk and ending a 19-pitch frame...

• [CHOMP!]: Two outs after Nats' catcher Wilson Ramos started the top of the second with a line drive single to right he was still standing on second after a successful sac bunt by Gio Gonzalez and a Ian Desmond infield pop out when Roger "The Shark" Bernadina came through with an opposite field RBI single to left that brought the Nationals' backstop around. Bernadina took a full-count curve to left field for his second hit in two at bats, allowing Ramos to score without a throw, then the Shark stole second before he was stranded there one out later when Ryan Zimmerman's swinging K ended the top inning with the Nationals up 4-0 on the Reds. Jay Bruce took Gio Gonzalez to right-center for a leadoff ground-rule double to start Cincinatti's second, but the Nats' left-hander struck the next three batters out in a relatively-quick, 22-pitch scoreless frame.

• #8 Activate: Reds' right-hander Mike Leake issued a leadoff walk to Nats' first baseman Adam LaRoche in the top of the third, then popped Bryce Harper up on a first-pitch sinker, but Danny Espinosa was waiting for the fastball and he got one and crushed it sending a two-run blast, his second of the year, out to right and into Great American Ballpark's right field bleachers to give the Nationals a 6-0 lead after two and a half innings in GABP. After striking out the side in the second, Gio Gonzalez did it again in the third, sending Mike Leake, Zack Cozart and Drew Stubbs back to the bench as he struck out his sixth-straight batter in 14-pitch, 1-2-3 3rd. 55 pitches total after three.

• 7-0: Ian Desmond started the fourth with a leadoff single to center and Ryan Zimmerman followed with a one-out line drive to right, setting Nats' first baseman Adam LaRoche up with two runners on. A wild pitch by Reds' right-hander Alfredo Simon put both runners in scoring position with one down, and an RBI line drive to right by LaRoche made it a 7-0 game after three and a half in Ohio. 2 for 2 with a walk and two RBIs for LaRoche through four innings in Great American Ballpark. Joey Votto hit an infield single in the Reds' fourth, breaking up Gio Gonzalez's streak of six-straight K's, then stole second with Brandon Phillips up before taking third on the Cincinnati second baseman's own single. First and third for Jay Bruce, and a sac fly to center gets the Reds on the board. 7-1. A 30-pitch frame has the Nats' left-hander at 85 pitches after four innings pitched.

• Hang On, GIO!: Reds' pinch hitter Miguel Cairo started the bottom of the fifth with a leadoff double to left then scored on a Zack Cozart RBI single to make it a 7-2 game and push Gio Gonzalez up to 93 pitches with no one out. One out later a walk to Joey Votto put two runners on and pushed the Nats' left-hander up to 101 pitches, earning him a talk with pitching coach Steve McCatty. Another walk to Brandon Phillips loaded the bases with one down, but Gonzalez bounced back, striking out Jay Bruce and popping up Scott Rolen to finish the fifth without further damage. Another 30-pitch inning has Gio up to 115 pitches total after five innings pitched.

• Versaille, Ohio's Own: Nats' right-hander Craig Stammen threw a quick, 10-pitch, 1-2-3 sixth after the Reds had scored a run in each of the two previous innings against Gio Gonzalez. The 28-year-old reliever needed 15 pitches to retire the Reds in order in the seventh, striking Joey Votto out with a full-count slider for his third K in 2.0 innings of work. Reds' second baseman Brandon Phillips broke up a streak of eight-straight batters retired with a leadoff single off Stammen in the bottom of the eighth. Jay Bruce shot a single through second into right, allowing Phillips to go first-to-third to put runners on the corner with no one out. Ryan Zimmerman bobbled a grounder to third by Scott Rolen, but caught Brandon Phillips too far off the bag and tagged him for the first out of the inning. Ryan Mattheus took over for Stammen with one down, immediately surrendering and RBI single by Ryan Ludwick that made it a 7-3 game. A one-out walk to Devin Mesoraco loaded the bases, but the Nats' right-hander popped Chris Heisey up and struck Zack Cozart out to leave the bases loaded and preserve the Nats' four-run lead.

• Finishing Up: Ryan Zimmerman singled by/off a diving Joey Votto at first for his third hit of the night (all to the right side) in the top of the ninth, but two outs later he was stranded at second as Reds' right-hander Sam LeCure got both Adam LaRoche (2 for 4) and Bryce Harper (0 for 5, 3 K's) looking to end the inning. Still 7-3 Nats. Left-hander Sean Burnett gave up a bunt single by Drew Stubbs to start the bottom of the frame, but Ryan Zimmerman got a force at second on a grounder to third by Joey Votto on which he made a Derek Jeter-esque leaping throw as he fell into foul territory. No DP, however, so a runner on first. Brandon Phillips flew out to right for out no.2 and Jay Bruce grounded out to short to end it on another nice play by Ian Desmond. 7-3 final. Nats win second-straight. Gio Gonzalez gets the W, (4-1). 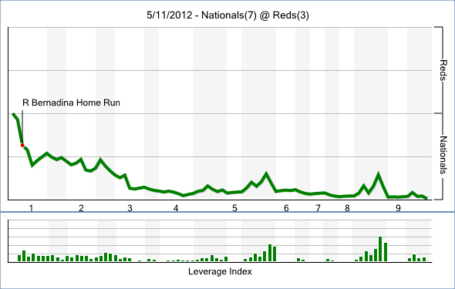 (H/t to Mattionals in the game thread for the title)