• 3 Hours and 35 Minutes Later: According to the Washington Nationals' official Twitter account, (@NationalsPR), 28-year-old Nats' right-hander Edwin Jackson spent at least some of the three hours and thirty-five minutes he waited during the rain delay this afternoon studying the Cincinnati Reds' batters in preparation for his seventh start of the year in today's series finale in Great American Ballpark. Just how much homework E-Jax had to do is unclear, considering he threw a complete game against the Reds when they met in D.C. earlier this season, holding Cincinnati's bats to one run on two hits in an April 14th outing. The Nats' hitters better have studied up on Bronson Arroyo, however, because the Reds' right-hander dominated the Nationals in that mid-April visit to the nation's capital, shutting Washington's hitters out over 7.1 scoreless in which he allowed just three hits before his bullpen blew a 1-0 lead and Cincinnati eventually lost.

• Votto HR No.1: Arroyo gave up a one-out bunt single by Roger Bernadina, but nothing else in a 17-pitch top of the first, and when he retook the mound again in the second, he was up 1-0 after Joey Votto took a 1-0 fastball from Edwin Jackson all the way the other way for a two-out, opposite field solo shot to left in the home-half of the first. Votto's third HR of 2012, and his first hit in nine career AB's vs E-Jax. The Nationals tied it up in the second though, with 19-year-old outfielder Bryce Harper hitting an opposite field leadoff single then going first-to-third™ one out later on Rick Ankiel's grounder up the middle before scoring on a Jesus Flores sac fly to center field. 1-1 game after one and a half. Edwin Jackson then threw a quick 10-pitch, 1-2-3 bottom of the second, collecting his third K of the game on the way to a scoreless frame.

• Desi And The Shark: Ian Desmond started the Nats' third with a line drive double to left on the first pitch of the inning from the Reds' right-hander Bronson Arroyo. Desmond's 10th two-bagger was followed by the Shark's 6th two-base hit of 2012, as Roger Bernadina hit a broken bat RBI double to right to bring Desmond around. 2-1 Nationals when Desmond scores. Bernadina took third on a Ryan Zimmerman groundout, but he was stranded there two outs later after Bronson Arroyo struck out Adam LaRoche and popped up Bryce Harper. 2-1 Nats in the third. Edwin Jackson needed just 10 pitches to retire the Reds' in order in the bottom of the inning, and he'd set seven in-a-row down after the Joey Votto HR in the first. 36 pitches through 3.0 IP.

• Votto vs E-Jax Take II: Danny Espinosa and Rick Ankiel singled in succession to start the Nationals' fourth, but Arroyo retired the next three batters in order to strand the two runners, striking out Jesus Flores and the opposing pitcher and then popping Ian Desmond up to end a 14-pitch frame. Reds' first baseman Joey Votto (who was 0 for 8 vs E-Jax before today and 1 for 9 when he stepped in for his second at bat of the game) came up with one down in Cincinnati's half of the inning and took a full-count change to straight-center and over the outfield wall. 404ft+ for the left-handed hitting first baseman's second HR in two at bats vs E-Jax. Votto's now 2 for 10 against the Nats' right-hander, and it's tied at 2-2 after four in Great American Ballpark. The 25-pitch inning has Edwin Jackson up to 61 pitches after four innings pitched.

• SPINNER!!: Bronson Arroyo had two outs in the fifth when he gave up an opposite field double on a bloop hit to left by Adam LaRoche. 9th double of the year for the Nats' first baseman, and Bryce Harper comes through with a two-out infield single in the next at bat to put two on with two outs for Danny Espinosa, who takes a 2-0 slider to right for a two-run double and a 4-2 Nationals' lead. Espinosa's 4th double, his second hit today and his fifth in ten at bats in the series in Great American Ballpark. Two doubles, two home runs and 5 RBI's for Espinosa in Ohio. The Nats' second baseman's thrown out at home to end the inning though, gunned down by left fielder Chris Heisey on the fourth two-out hit of the inning, a Jesus Flores single to left. Hanigan applies the tag. The ump punches Epsinosa out and it's 4-2 Nationals after four and a half.

• Co-Stan-Zo: Six pitches into the Reds' fifth, there were two runners in scoring position as Ryan Hanigan and Wilson Valdez singled and doubled, respectively, off Edwin Jackson to start the inning. A sac fly by debuting Reds' infielder Mike Constanzo brought Hanigan home to make it a 3-2 game, (ed. note - "That's Costanzo's first MLB RBI in his first AB, eight years after the Philadelphia Phillies drafted him in the 2nd Round of the '05 Draft. Congrats, Mike."), but E-Jax retired the next two runners in order to strand Valdez at second and preserve the Nats' one-run lead at the end of a 16-pitch inning that had the Nats' right-hander at 77 pitches after 5.0 IP. 4-3 Nationals.

• Goon Squad!!!: Reds' right-hander Sam LeCure and Nats' lefty Tom Gorzelanny each threw scoreless sixths, LeCure on 18 pitches, Gorzelanny on 10. In the Nats' half, Steve Lombardozzi reached on an error by Joey Votto on a sharp grounder that got under the Reds' first baseman's glove, but Lombo was stranded at second three outs later. Gorzelanny gave up a two-out walk to Jay Bruce, but popped Todd Frazier up with one pitch to complete his own scoreless sixth. Still 4-3 Nats heading into the seventh. LeCure got Bryce Harper to ground out for the first out of the Nats' frame, then issued back-to-back walks to Danny Espinosa and Rick Ankiel before striking out Jesus Flores. Two on, two out, and Chad Tracy does the Goon Squad proud with a two-out RBI single through the right side. Danny Espinosa comes around to score and the Nationals go up 5-3 over the Reds after six and a half...

• Fireworks + Rain: Nats' right-hander Ryan Mattheus retired the Reds in order in a quick, 14-pitch seventh. Reds' right-hander J.J. Hoover walked Roger Bernadina to start the eighth. One out later the Shark stole second (4th SB) and took third on a throwing error charged to Reds' catcher Ryan Hanigan. With a runner on third and one down, an Adam LaRoche RBI line drive single to right brought Bernadina in from third for the Nats' sixth run and a 6-3 lead. Ian Desmond bobbled a grounder from Drew Stubbs, putting the leadoff runner on in the Reds' eighth. After Mattheus got Chris Heisey swinging on three pitches for the first out of the inning, left-hander Sean Burnett came on to face Joey Votto. Votto doubled to right with one down to put runners on second and third. Votto's 3 for 4 w/ 2 HR's and a double today. Brandon Phillips worked the count full, but K'd swinging at a change in the dirt. Two out. Reds' slugger Jay Bruce flies to right and that should end i---- Bryce Harper loses it in the (lights/rain?) and it sails over his head for a two-run double. 6-5 game. Ryan Ludwick... K's chasing a 2-2 slider. Tying run stranded at second. 6-5 Nats after eight.

• Lightning In the Rain: Reds' closer Sean Marshall gave up a one-out single by Jesus Flores in the Nationals' ninth and Ian Desmond snuck a two-out grounder under shortstop Wilson Valdez's glove for a two-out hit, but Tyler Moore K'd swinging to end the top of the frame, after which Henry "Lightning" Rodriguez came on looking for his ninth save of the season. Ryan Hanigan singled through the left side of the infield on a 3-2 fastball to put the tying run on. A Wilson Valdez sac bunt put the tying run on second. Ageless pinch hitter Miguel Cairo (he's 38) popped out to Ryan Zimmerman in foul territory near the third base dugout. Drew Stubbs... with the tying run at second... walks on a low 3-1 pitch from Rodriguez. Reds' OF Chris Heisey steps in with two on and two out and works the count full... and walks. Bases loaded for Joey Votto. Rodriguez is up to 22 pitches. The Nats' closer bounces a 1-2 change in the dir that Jesus Flores blocks, 2-1, Votto fouls off a fastball, 2-2... and Joey Votto hits a walk-off grand slam. 4 for 5, 3 HR's, 6 RBI's. 9-6 final. 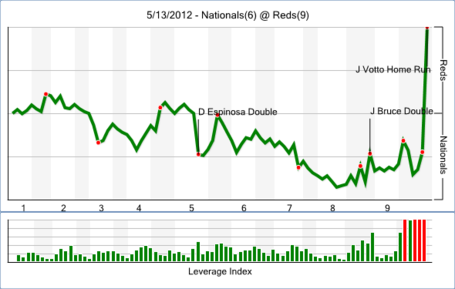 (Yes, I know the ump blew some strike 3 calls that would have ended the game, but I'm too hungry to put up the graphics.)