• Trading E's Early: Washington Nationals' starter Ross Detwiler retired the first three San Diego Padres' hitters he faced tonight on nine pitches in the top of the first, then the Nats' bats gave the 26-year-old left-hander a lead to work with in the bottom of the frame with some help from the Padres' defense. Ian Desmond reached safely on a throwing error by Padres' third baseman Chase Headley on what appeared to be a routine grounder. Desmond took second as the throw bounced by Padres' first baseman Yonder Alonso and off the rolled up tarp. A Roger Bernadina fly to center field was deep enough to allow Desmond to tag and take third and after a one-out walk to Ryan Zimmerman, an RBI groundout to first by Adam LaRoche brought an unearned run in for a 1-0 Nats' lead. Detwiler gave up a leadoff double to right by Yonder Alonso on a 1-0 fastball in the top of the second, but two outs later a fly to right by Orlando Hudson should have ended the inning, but Bryce Harper had it bounce off the heel of his glove. E:9, Harper's second, and it's a 1-1 game after two innings in Nats Park after a 21-pitch second by Detwiler...

• Sandy Leon's 1st AB: Rick Ankiel took a one-out walk from Padres' right-hander Tim Stauffer in the Nationals' second, bringing debuting 23-year-old Nats' catcher Sandy Leon up to the plate. The switch-hitting backstop took his first at bat from the left side and took a 1-2 fastball insider high under his hands for a called strike three in his first MLB at bat. (Everyone says, "Welcome to the big leagues, kid." Everyone else says, "[sigh]") 20-pitch second for Stauffer, and it's still tied at 1-1.

• New 1-2-3: Ross Detwiler threw a quick 14-pitch third, giving up a two-out hit by Chris Denorfia in a scoreless top of the third. Ian Desmond liked the first pitch he saw from Tim Stauffer in the bottom of the inning, and the Nats' shortstop singled up the middle to earn his way on in his second at bat. A Roger Bernadina "Shark"-single to center in the next at bat allowed Desmond to go from first-to-third™ in front of Ryan Zimmerman and the third-straight hit of the bottom of the third inning brought Desmond around. 2-1 Nats on Zimmerman's RBI single. Adam LaRoche grounded into a 4-6-3 DP in the next AB, leaving the Shark on third when Bryce Harper stepped in, but a snap throw to third by Padres' backstop Nick Hundley hit Bernadina and bounce by third, bringing the second run of the inning in on another San Diego error. 3-1 Nationals. And Bryce Harper makes history... [Goes into recording a moment of history mode...]

• BRYCE HARPER GOES YARD!!: 29-year-old San Diego Padres' '03 1st Round pick, right-hander Tim Stauffer, is now irrevocably linked to Bryce Harper in baseball lore as the pitcher who gave up the 2010 no.1 overall pick's first major league home run. The Nats' 19-year-old outfielder took 62 trips (62 PA, 54 AB) to the plate before he finally connected on a 2-1 slider/cutter from Stauffer and took it deep to center field and onto the batter's eye grass in Nationals Park for a 404ft+ solo HR that gave the Nationals a 4-1 lead in the bottom of the third inning of tonight's game. When Harper stepped to the plate, Roger Bernadina was on third, but a snap throw to the bag by Padres' catcher Nick Hundley with Harper at the plate bounced off the runner and got by San Diego infielder Chase Headley, allowing the Shark to score before Harper went yard. The fans in attendance on a rain-soaked night in the nation's capital went wild after Harper's HR, demanding a curtain call from the rookie outfielder who was happy to oblige after the entire team greeted him in the dugout to celebrate HR no. 1. 4-1 Nats after three...

And here's our completely over-the-top all-CAPS tweet of the call:

• NOT AGAIN!!: The fun didn't last long as debuting Nats' catcher Sandy Leon was injured on a play at the plate in the top of the fourth. Padres' first baseman Yonder Alonso grounded toward first in the first at bat, but Adam LaRoche couldn't make the play and the leadoff runner was on with Chase Headley due up. The Padres' third baseman lined to center on a 1-1 sinker that didn't get down. With runners on second and third, Ross Detwiler got San Diego backstop Nick Hundley swinging for the first out of the inning, but Orlando Hudson singled to center in the next at bat, and Chase Headley and the throw in both arrived home at the same time. Sandy Leon made the catch, but lost the ball in the ensuing collision, and fell back on his ankle as Headley ran him over. Two days after the Nationals lost Wilson Ramos for the year to a torn ACL, the Nats' new backup catcher suffered what was later diagnosed as a high ankle sprain. Orlando Hudson stole third and scored on a safety bunt as another injury sank in, and it was a 4-4 game after three and a half innings. With the game tied, Tim Stauffer threw a 12-pitch fourth, and in the top of the fifth, Padres' left fielder Jesus Guzman doubled with one down, took third on a groundout and scored on a two-out RBI single to right by Chase Headley that put San Diego up 5-4 after the top of the fifth.

• DESMOND!!: It was still 5-4 in the bottom of the sixth when Rick Ankiel took a leadoff walk from Padres' reliever Miles Mikolas. A perfectly-executed hit-and-run single through second by Jesus Flores in the next at bat set the Nats up with runners on the corners and Ian Desmond due up. Desmond just missed his fifth home run, settling for his 11th double of 2012. Desmond doubled off the out-of-town scoreboard in right field, off the green strip at the top, but not out. Good enough to drive in two runs though. Ankiel and Flores come around to score and the Nationals took a 6-5 lead after six innings in Nats Park.

• A-Pen: Craig Stammen threw an 11-pitch sixth before the Nationals took the lead back, then returned to the mound in the seventh, holding the Padres hitless in another 11-pitch frame. Two scoreless on 22 pitches but Stammen, who held the Padres hitless. A 9-pitch, 1-2-3 8th Nats' RHP Tyler Clippard followed and it was 6-5 Nats after 7 and a 1/2. And Henry "Lightning" Rodriguez was warming...

• IGNITE YOUR CHADITUDE!!: Chad Tracy gave the Nationals one insurance run to work with in the bottom of the 8th with a pinch hit HR to right field and over the home team's bullpen to make it a 7-5 game and give Nats' closer Henry Rodriguez a little breathing room. Xavier Nady then gave Rodriguez a little more breathing room with a solo HR to left one out later. Tracy's third. Nady's second and it's 8-5 Nationals after eight. Henry "Lightning" Rodriguez came on in the ninth... and issued a leadoff walk, a one-out walk and a third free pass to load the bases. Bases loaded, one out, and Sean Burnett's called in from the bullpen. Nats' skipper Davey Johnson defended his reliever in the press this afternoon, but after three walks to bring the go-ahead run up, he couldn't stick with Rodriguez. Nats' lefty Sean Burnett came on against Padres' outfielder Jesus Guzman, and six pitches later the Nationals had the win after a grounder back to the mound and a slick, 1-2-3 game-ending DP. Nationals win, 8-5 final. 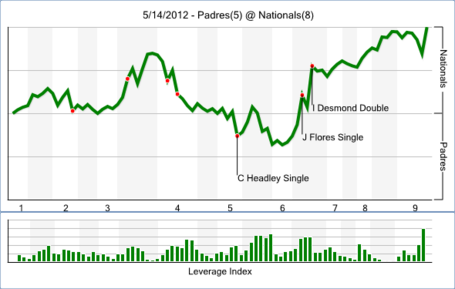