• 1 Dropped Pop + 7-Minute Delay + Icy Hot? = Angry Stras: Short pop to left off San Diego outfielder Will Venable's bat. Washington Nationals' Ian Desmond runs back, looking over his shoulder. Roger Bernadina and Rick Ankiel cruise in from left and center field, respectively, and they all converge, stop and watch the ball drop in the left-center grass for what will go in the books as a leadoff double for the Padres' leadoff hitter. Not a good start to this afternoon's game. It didn't get much better. Well, the next at bat was better actually, with Strasburg striking Cameron Maybin out with a sick 79 mph 0-2 curve. Chase Headley worked the count full in the AB that followed and walked, and Padres' first baseman Yonder Alonso made the Nats pay for the missed pop that started the game with a one-out, RBI line drive single to right on a 95 mph 1-0 fastball from Strasburg. 1-0 Padres in the first. By the time Strasburg issued a two-out base-loading walk to left fielder James Darnell, the Nationals' right-hander was up to 24 pitches when rain delayed the game for seven minutes with the count full and catcher John Baker at the plate...

• Storm's Over Now: ...Seven minutes later, Baker took the full-count offering from Strasburg back up the middle for a two-run single that made it 3-0 Padres. Strasburg threw 39 pitches before he got out of a first inning that started with what should have been an error or at least an unearned run to preserve Strasburg's ERA. Padres' right-hander Anthony Bass needed just seven pitches, five of them strikes to retire the Nationals in order in the bottom of the first. Strasburg thought he had the second out of the Padres' second on a 2-2 fastball to Will Venable, but the ump said it was low and the next pitch was drilled to right for a one-out triple. A swinging K on a darting change inside to Cameron Maybin and a one-pitch at bat that ended with Chase Headley flying to center ended a much quicker 14-pitch second for the Nats' starter, however, with the Nationals down 3-0 in the second of two with San Diego.

• HR No. 3 of 2012 vs Stras: Strasburg had the first two outs of the third on four pitches, but a 95 mph 1-0 fastball to Padres' outfielder James Darnell was up in the zone and got crushed. Two-out solo HR to left, 4-0 Padres. The outfielder's first HR of the year is just the third Strasburg has surrendered this season. A 10 pitch frame has Strasburg up to 63 pitches after three innings in the nation's capital. Anthony Bass, on the other hand, has a no-hitter through three, on 30 pitches, and he's faced the minimum, walking Adam LaRoche to start the second, but erasing the Nats' only baserunner one out later on a 4-6-3 second-inning-ending DP in the next AB.

• Strasburg's Out After 4.0?: Back-to-back two-out singles by Padres' outfielder Will Venable and Cameron Maybin left Venable a HR away from hitting for the cycle after three at bats, but Stephen Strasburg buckled down, ignoring a double steal and concentrating on the next batter, Chase Headley, who took a 2-2 fastball for a called strike three that ended an 18-pitch fourth and Strasburg's eighth start after 81 pitches, 55 of them strikes. Ian Desmond broke Anthony Bass' no-hit bid up with a leadoff single in the bottom of the fourth, then stole second one out later with Ryan Zimmerman up, but a one-hop liner to second by Zim and a fly to right by LaRoche left Desmond standing at third at the end of the fourth. Still 4-0 Padres.

• Career HR no.2: Nats' lefty Tom Gorzelanny took over in the fifth, giving up a one-out single by Orlando Hudson and a two-out RBI hit by John Baker. 5-0 Padres when the O-Dog cruises in on Baker's soft fly to center after having taken second on a groundout in the previous at bat. Gorzelanny wraps up a 14-pitch frame. Just when it looks like all hope is lost, Nats' right fielder Bryce Harper connects with 91 mph fastball from the Padres' Bass and launches it to right-center and over the GEICO sign for his second career home run, and his second in two games. 5-1 Padres. Bass finished off a quick 12-pitch frame, but the Nats' 19-year-old outfielder got the Nationals on the board and gave the Nats fans who turned out something to remember. I mean, not like his first HR memorable, but nice nonetheless... right? Uh... moving on...

• Davey Leaves Gorzo In: Gorzelanny returned to the hill and threw a quick 15-pitch top of the sixth, then stayed in to hit and singled to start the Nats' half of the inning. Ian Desmond fouled off a 2-2 slider from Anthony Bass, then lined to right on a 95 mph fastball for an opposite field single to put two runners on with no one out, but the Padres' right-handed starter got Roger Bernadina to chase a full-count slider inside and got two outs with one pitch when Ryan Zimmerman grounded into an inning-ending 4-6-3 DP to end a 15-pitch sixth. Still 5-1 San Diego after six.

• Gorzo "Takes One For The Team": Tom Gorzelanny did the yeoman's work this afternoon, throwing 56 pitches over three innings and giving up just one run after Stephen Strasburg left the game. 56 pitches in relief after Strasburg threw 81 in four innings. Anthony Bass was just at 69 pitches total when he took the mound again in the seventh. 11 pitches, and three groundouts to the right side of the infield later, the Padres' right-hander was through seven on 80 pitches, 52 of them strikes, having allowed only four hits, a run on the Harper home run and a walk while recording six K's. Still 5-1 Padres. Nats' reliever Ryan Perry took over in the eighth and gave up a leadoff ground-rule double by John Baker. Two outs later, a RBI single by Will Venable made it a 6-1 game and gave the Padres' outfielder four hits in five at bats. 6-1 Padres after seven and a half and a 13-pitch eighth has Anthony Bass at 93 pitches total in a dominating outing. Padres' right-hander Andrew Cashner then put the Nats out for good, in spite of a two-out single by LaRoche, striking Bryce Harper out with a 101 mph 2-2 four-seamer to end the game. 6-1 Padres win. Nats fail to sweep even a shortened series. Two with the Pirates starting tomorrow night...

• Miss The Game? Some of the DC Faithful Were Watching... 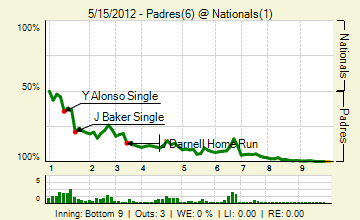