• McCutchen vs Harper: Pittsburgh Pirates' center fielder Andrew McCutchen was 6 for 9 with two home runs and three walks in three games last week when the Washington Nationals visited PNC Park. The 25-year-old '05 1st Round pick waited on an 80 mph 0-1 curve in his first at bat tonight, and ripped a two-out single through short, but Nats' left-hander Gio Gonzalez struck Casey McGehee with a 94 mph 1-2 fastball outside to strand the Pirates' runner at first at the end of a 14-pitch opening inning in front of 25,942 on Military Appreciation Night in the nation's capital.

19-year-old Nats' outfielder Bryce Harper was 2 for 12 with a double in the series in Pittsburgh, and he made headlines for hurting himself when a bat bounced back off a wall he'd struck in frustration and caught him just above the left eye causing a cut which required 10 stitches. Harper's making news doing productive things with his bat these days, however, having homered in each of the last two games and he just missed hitting his third in three when he took an 88 mph 1-1 two-seamer to right and off the top of out-of-town scoreboard just feet from a home run in the Nats' 2010 no.1 overall pick's first at bat of the evening. A ground out to the right side of the infield off Ryan Zimmerman's bat brought Harper in from third, and Gio Gonzalez took the mound in the second with a 1-0 lead. 15 pitches and three K's later the Nats' lefty was through 2.0 scoreless innings on 29 pitches. 1-0 Nationals...

• Desmond Goes Yard: After Erik Bedard threw a quick 11-pitch second, he thought he'd K'd on a 1-1 pitch from Gio Gonzalez, (and to be fair Jesus Flores fired it to third, so maybe it was the ump who was confused), but instead the Pirates' left-hander took a 77 mph 1-2 bender for a called strike three and Gio Gonzalez's 5th K through three scoreless innings. The Nats' left-hander threw a quick seven-pitch 1-2-3 third, and four pitches later he's up 2-0 when Ian Desmond takes a hanging 1-2 curve from the Pirates' starter to left for a line drive HR, Desmond's 5th home of 2012. 2-0 Nationals after three in D.C. Gio Gonzalez gave up a long fly ball to left by Andrew McCutchen in the Pirates' fourth, but that ball fell into Tyler Moore's glove on the track and the Nationals' left-hander got a groundout from Casey McGehee in the next AB to end a 14th pitch fourth by retiring the 10th straight Pirates' batter.

• 2 ER in 26.0 IP: Pirates' outfielder Yamaico Navarro broke up Gio Gonzalez's streak of ten-straight batters retired, battling back from an 0-2 count to take a leadoff walk in a nine-pitch at bat to start the top of the fifth. Rod Barajas collected Pittsburgh's second hit in the next at bat, lining to center on a single that allowed Navarro to go from first to third, and one out later an RBI line drive to center by Pirates' third baseman Josh Harrison cut the Nats' lead in half when just the second run Gio Gonzalez has given up in 26.0 IP at home so far in 2012 came in from third. 2-1 game, but Gio Gonzalez gets through a 28-pitch inning with the lead in tact. Erik Bedard needed just 11 pitches to retire the Nationals in order in the home-half of the fifth, and he'd set nine straight down following Desmond's leadoff HR in the third when he finished the inning.

• Back-to-Back: Pirates' second baseman Neil Walker was punched out by first base ump Alan Porter in the first at bat of the Pirates' sixth. 8 K's by Gio Gonzalez. The Nats' lefty got out no.2 with one pitch as Andrew McCutchen grounded out to short, and Casey McGehee K'd swinging way out in front of a full-count change as Gonzalez completed a 12-pitch, 1-2-3 6th in which he recorded his eighth and ninth K's on the night. 86 pitches, 57 strikes for Gio Gonzalez through six innings in Nationals Park. Erik Bedard struck both Bryce Harper and Ryan Zimmerman out to start the Nationals' sixth with his third and fourth straight K's and his eleventh batter in a row retired, but Nats' first baseman Adam LaRoche took a 1-2 four-seamer to right and over the out-of-town scoreboard for a solo HR and a 3-1 Nationals' lead. LaRoche's seventh is followed by Xavier Nady's third, as the Nats go back-to-back to make it a three-run lead. LaRoche to right, Nady to left-center, 4-1 Nationals in Nats Park.

• 48.0 W/O A HR: Yamaico Navarro popped up to Adam LaRoche in foul territory off first for the first out of the seventh. Gio Gonzalez issued a one-out walk to Rod Barajas, but popped up Clint Barmes for out no.2. The Nats' lefty wasn't happy that home plate ump Tony Randazo called two curves low in the next at bat, and he was even less amused after Pirates' 3B Josh Harrison took a 1-2 fastball to left and over the visitor's bullpen for a two-run HR. 4-3 Nationals on the first HR Gio Gonzalez has allowed through 48.0 IP this season. Gio Gonzalez bounces back and strikes Pirates' pinch hitter Nate McLouth out with a 95 mph 2-2 fastball on pitch no. 106 of the night. It would be his last as Roger Bernadina hit for Gio in the Nats' half of the inning...

• Career Hit no.1,000: Pirates' reliever Evan Meek put the leadoff runner on when he hit Jesus Flores in the first at bat of the Nats' seventh, then pitched around Bryce Harper with one down and Ryan Zimmerman due up. Another free pass loaded the bases as Zimmerman walked for the 8th time in the last seven games and Adam LaRoche cleared the bases with a three-RBI line drive to right that broke the game open. 7-3 Nationals on LaRoche's 10th double of the year, third hit tonight and the 1,000 hit of the 9-year-veteran's MLB career. 256th career double. 7-3 Nats after seven. RHP Tyler Clippard gave up leadoff and one-out singles by Jose Tabata and Andrew McCutchen, respectively, in the Pirates' eighth, and a sac fly by Casey McGehee with runners on the corner brought the Pirates' fourth run of the game in. 7-4 Nationals. Clippard holds it there and completes an 18-pitch frame.

• Lightning: 7-4 Nationals after eight, and Nats' skipper Davey Johnson brings Henry Rodriguez out to the mound, trying to get the struggling pitcher going again. The first batter the 25-year-old flame-throwing right-hander faced was, of course, Pirates' C Rod Barajas, who hit a walk-off HR off Rodriguez in last week's series. The catcher reached first safely tonight on an error by Ian Desmond at short on what should have been out no.1. E:6. Clint Barmes K'd swinging at a 99mph 2-2 heater for out no.1 instead and Josh Harrison grounds into a game-ending 5-4-3 DP to earn save no. 9 of 2012. Nats win, 7-4 final. 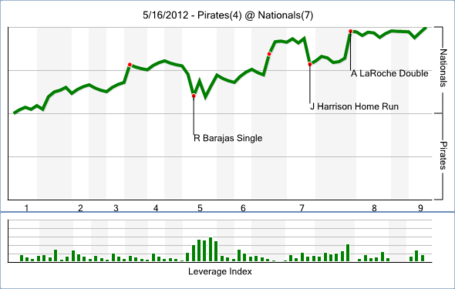